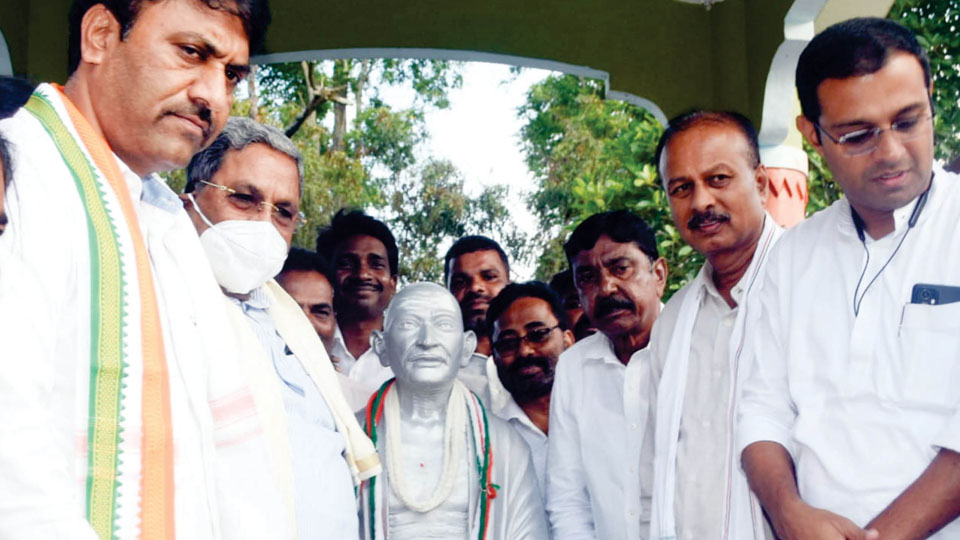 Mysore/Mysuru: Maintaining that top Congress leader Rahul Gandhi’s Bharat Jodo Yatra is being taken out for the welfare of the people, Opposition leader and former Chief Minister Siddharamaiah called upon the party workers to ensure a very good turnout for the Yatra when it reaches Mysuru early next month.

Addressing a preparatory meeting of Bharat Jodo Yatra at Congress Bhavan here on Sunday, Siddharamaiah asserted that the Yatra was not for the sake of Congress party but for the well-being of the people.

Contending that no political party had set out such a rally post-independence for the unity of the country, the ex-CM said the success of the rally would ensure political benefit for the party.

Stressing on the need for huge public participation in the rally, Siddharamaiah lashed out at Prime Minister Modi for failing to meet the aspirations of the people. He also hit out at the State Government for rampant corruption and maladministration.

At one point of time, Siddharamaiah, apparently due to slip of the tongue,said “Modi Yatra” instead of “Rahul Yatra.” When party workers alerted him about the faux pas, Siddu corrected himself and said that it was just a slip of tongue.

KPCC President D.K. Shivakumar, in his address, said that Bharat Jodo Yatra is coming to Mysuru during Dasara and the party has asked MLAs, former Legislators and leaders to ensure that at least 15,000 people from each Assembly segment take part in the rally. Emphasising on the need for ensuring total success of the rally, with Assembly polls round the corner, Shivakumar maintained that inflation was soaring and unemployment was rising under BJP rule.

Shivakumar underwent a health check up even as the meeting was underway, as he suffered from high temperature and tiredness.

Former Chief Minister Siddharamaiah said that former AICC Chief Rahul Gandhi will visit Badanavalu village in Nanja-ngud during his ongoing Bharat Jodo Yatra and Gandhi Jayanthi will be celebrated with him on Oct. 2.

He was speaking to press-persons after an inspection of Khadi Gramodyoga Kendra at Badanavalu on Saturday.

“Bharat Jodo Yatra being undertaken by Rahul Gandhi will enter Karnataka on Sept. 30 through Gundlupet. On Oct. 2, Rahul will visit Badanavalu Khadi Gramo-dyoga Centre and celebrate Gandhi Jayanthi by offering flowers to the bust of Mahatma Gandhi. On that day, a programme of singing bhajans and patriotic songs will be held from 7.30 am to 2.30 pm. Admission to the event is restricted to just 400-500 distinguished persons only. AICC General Secretary K.C. Venugopal, Karnataka State In-charge Randeep Singh Surjewala, all State leaders and local leaders will participate in the event,” he added.

Stating that the Bharat Jodo Yatra will serve the interests of the country, Siddharamaiah said that both the State and Central Governments are sowing seeds of communal disharmony, creating confusions in the minds of people and spoiling the society.

“Because of the shortage of cotton, it has now become difficult to spin and weave clothes. The women who were working here are distressed. I am not aware that they are being paid very low wages. I will discuss the issue with the concerned,” he said.

The former Chief Minister clarified that there is no difference between him and other State Congress leaders with respect to Bharat Jodo Yatra. All party leaders along with KPCC President will unitedly participate in the Yatra and make it successful. I will participate with R. Dhruvanarayan in a meeting to be held in Mysuru under the leadership of D.K. Shivakumar, to ensure the success of Bharat Jodo Yatra,” concluded Siddharamaiah.