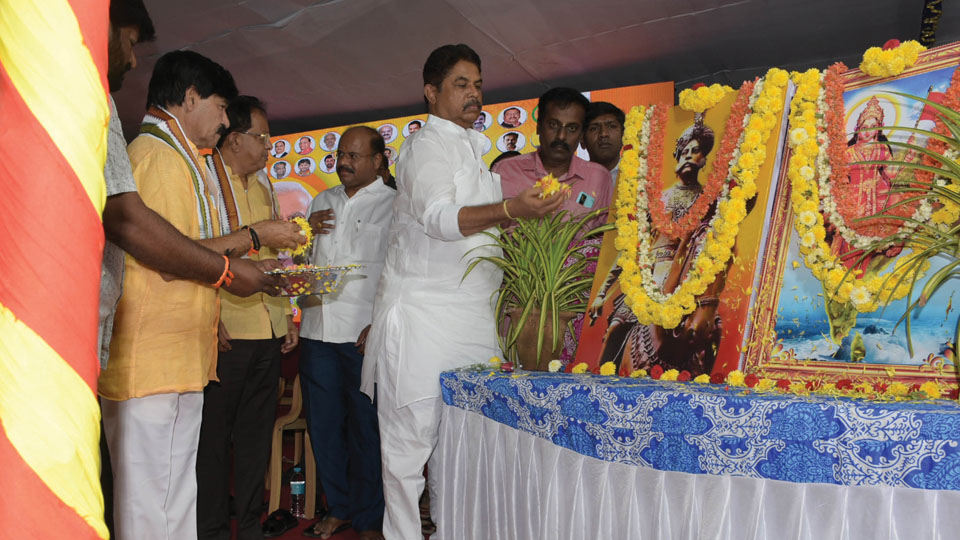 Compensation has been paid to flood affected: Minister Ashoka

Mysore/Mysuru: Maintaining that the Government has paid appropriate compensation to those who lost homes and other properties during the recent floods, Revenue Minister R. Ashoka said that the BJP Government has ensured that social security pensions are sanctioned for beneficiaries in just three days.

He was speaking on the fourth day of the nine-day ‘Modi Yug Utsav-2022’ event, organised by K.R. MLA S.A. Ramdas at Ramalingeshwara Park in Vidyaranyapuram here this morning.

Claiming that the State has copious rainfall whenever the BJP is in power and that the State faces drought when ruled by the Congress, Ashoka said that all water bodies are full to the brim because of the heavy rains that lashed the State in recent months.

Pointing out that Deputy Commissioners and Tahsildars are asked to undertake village stays for addressing revenue and other social issues, he said that officials of the Department have been directed to ensure that the departmental benefits reach all the targeted beneficiaries without fail and on time. Noting that the Government has initiated change of land use norms for the benefit of farmers, the shelterless and entrepreneurs, Ashoka asserted that there are no complaints on social security pensions either from the beneficiaries or the opposition parties.

Arguing that the Government has been functioning in a transparent manner and has been delivering benefits at doorsteps, he said that the Revenue Department is working overtime to ensure that all revenue problems are suitably addressed.

Lauding MLA Ramdas for his outstanding work, he recalled that Prime Minister Modi had patted Ramdas on his back in acknowledgement of his work. “Our State will become a model one in the true sense if every legislator and leaders work like  Ramdas and there is no doubt that Karnataka will become prosperous if it happens”, Ashoka remarked.

MLA S.A. Ramdas in his address, said that about 50,000 beneficiaries of various Government schemes and programmes will be distributed benefits during the 9-day event, which concludes on Sept. 25. Cautioning the people against taking loans on exorbitant interest from private money lenders, he appealed them to be aware of Government schemes and not let go any opportunity of availing benefits that they are entitled to.

Earlier, speaking to presspersons on the sidelines of the event, Ashoka asserted that all land encroachments across the State will be cleared in due course.

Replying to a question on whether there was politics in clearing encroachments in Mysuru, Ashoka said that there is politics in all issues. Maintaining that allegations and counter allegations are common in politics, he contended that all land encroachments will be cleared, starting with Bengaluru, where the process has already begun.