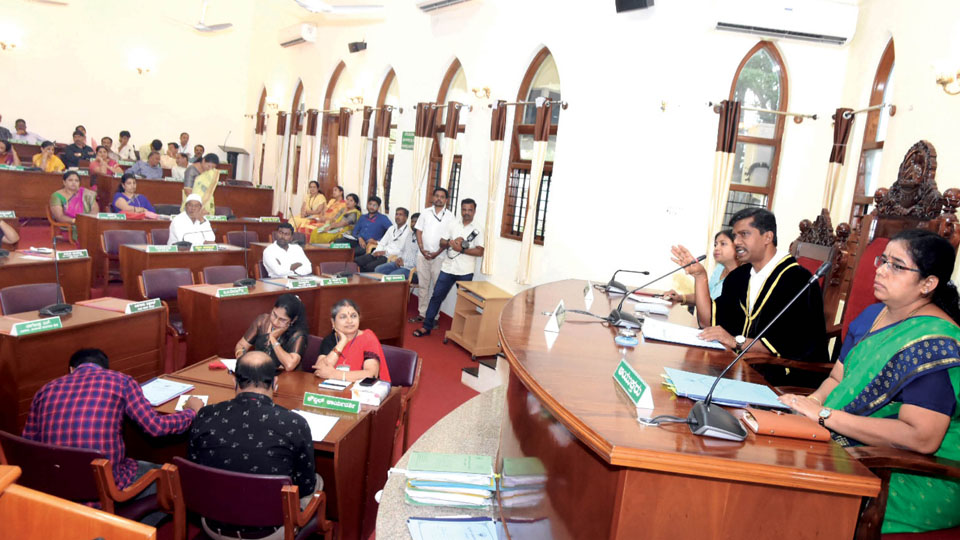 Mysore/Mysuru: Announcing a grand ‘Mane-Mane’ Dasara, Mayor Shivakumar said that every ward of the 65-member MCC will get a grant of Rs.2 lakh, exclusive of GST.

Speaking at the Dasara Special Council meeting of the MCC here on Monday, Shivakumar said that the work on fixing potholes across the city has been taken up out of the Legislators’ Funds and utilisation of grants of the previous Mayor. The work orders have been issued and the Contractors have been directed to fill up potholes by Dasara, he noted.

Continuing, the Mayor said that footpath encroachments on Dasara procession route from K.R. Circle to Millennium circle is being cleared. Also, mobile toilets will be set up at suitable spots and debris will be cleared in all the MCC wards, he added.

Referring to the treatment of ailing Corporator Dr. Ashwini Sharath, Shivakumar said that the condition of Ashwini, who is undergoing treatment at a private hospital, continues to be critical. Responding to the suggestions of the Corporators, Shivakumar said that measures will be taken to fund the treatment expenditure. A resolution will be passed to cover treatment cost of all ailing Corporators in the next Council meeting, following which Government approval will be taken, he pointed out.

Referring to Dasara pass issue, the Mayor said that all Corporators will be issued Gold Card that will enable them to take part in all Dasara programmes. The district administration will be sought to allow four persons per pass for the programmes, he said.

Corporators sought special Dasara funds from Government and wanted to bring all Corporators under Health Insurance.

Former Mayor Ayub Khan asked the Mayor to ensure that there are no confusions in the distribution of Dasara passes.

JD(S) Corporator Prema Shankaregowda wanted the Government to provide Rs. 20 lakh to every ward for pothole filling. She also demanded that the MCC deploy at least five more Pourakarmikas to  every ward in the wake of Dasara festivities.

Another JD(S) Corporator SBM Manju said that Pourakarmikas have warned of staging protest if their demands are not met. He urged the authorities to ensure that there will be no problems in maintaining cleanliness and hygiene.

Referring to a Dasara elephant giving birth to a calf in the Palace premises recently, Congress Corporator Shobha Sunil wondered what the situation would have been had the elephant given birth when  the procession was underway. She wanted action against those responsible for bringing the pregnant elephant for Dasara.

After hearing the views and suggestions of  Corporators, Mayor Shivakumar said that it is a matter of pride that the President of India is coming to Mysuru for inaugurating Dasara. Asking all Corporators to set aside their political differences for ensuring an incident-free Dasara, the Mayor sought the co-operation of everyone in making  Dasara a huge success.

The meeting  discussed in depth the issue of MCC not getting a special Dasara grant from Government thus far.

MCC Additional Commissioner Roopa said that the MCC has not received special grant from the Government. However, the district administration has released Rs. 2.25 crore to engineering and other sections of the MCC, she pointed out.

Corporator Arif Hussain opined that it was not right on the part of the MCC to call the meeting in the absence of announcement of a special grant from the Government for Dasara. He sought Rs. 5 lakh as special grant for every ward.

Mayor Shivakumar said that the grants issue will be immediately brought to the notice of the district administration and the District In-charge Minister.

Targeting officials for laxity in their approach towards addressing civic problems, the Mayor asked the officials who do not show determination and commitment, to move out of MCC.

As the meeting went on, several Corporators who raised the issue of piped gas supply, wanted a debate on the works concerning  Piped Natural Gas (PNG)  project that is being implemented  in the city.

Some Corporators argued that lakhs of rupees is going waste in the implementation of the project as security and safety concerns are not addressed. Seeking complete details of the Project, they urged for immediate suspension of the ongoing PNG project works. They also demanded repeal of the resolution adopted in the last Council meeting held under the Chairmanship of the previous Mayor Sunanda Palanetra, which was passed in the absence of any debate on the issue.