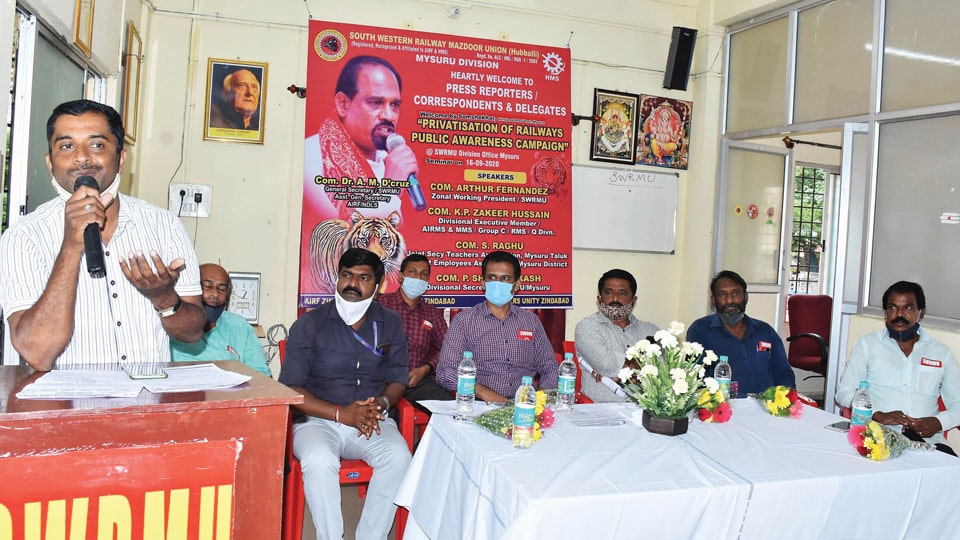 Addressing a ‘Rail Bachao – Desh Bachao’ public awareness programme at the Union office near the City Railway Station yesterday, the Union’s Mysuru Division President S. Somashekar said that Indian Railways, founded in 1853, has been serving the Indian population round the clock and has become an integral part of every individual travelling within the country with its dedicated service.

Pointing out that Indian Railways is amongst the world’s largest rail network with 1,15,000 track kilometres spread over 7,349 Stations distributed in 17 Zones, he said that the public, who are important stake holders of the Railways must strongly oppose privatisation moves in the better interest  of the nation.

Claiming that the Centre is making moves to privatise Railways by handing over 150 trains and 50 Stations to private players, Somashekar said that the Government has begun Corporatisation of all Railway Production Units, sale/ lease of land belonging to the Railways to private parties and privatisation of Stations.

Stating that a 13-lakh strong workforce is striving for the growth of Railways, he said that there are 7,000 personnel serving in Mysuru Division.

Noting that the Indian Railways is operating 12,600 passenger trains carrying 23 million passengers and 7,421 freight trains carrying 3 million metric tonnes of goods daily, Somashekar contended that Railways is the cheapest and safest means of public transport. When such is the situation, the Centre’s privatisation moves is deplorable and condemnable.

He wanted the public, who are also the stakeholders, to support the ‘Rail Bachao – Desh Bachao’ campaign and thus save the Railways from privatisation.