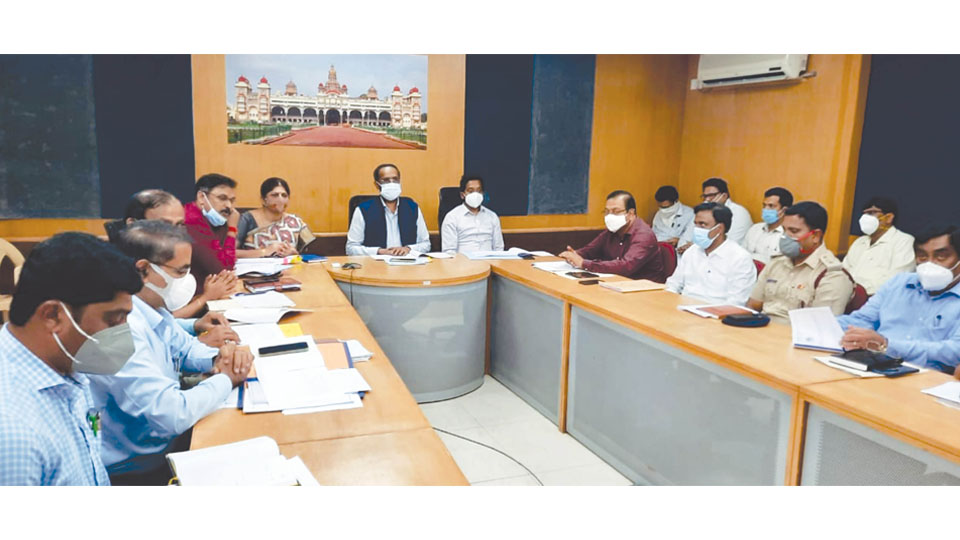 Mysore/Mysuru: Mysuru District in-Charge Secretary N. Jayaram has directed the payment of compensation to those whose house, crops and cattle are damaged because of the rains and has said that the compensation must be provided in two days.

He was speaking at a progress review meeting held at Deputy Commissioner (DC)’s Office after visiting rain affected areas of Hunsur and K.R. Nagar taluk. “Tobacco crops are damaged most. Joint surveys are to be carried out to ensure payment and since more rain expected in the coming days, precautionary measures must be taken. Compensation has been announced but the beneficiaries are not aware of this. Tahsildars should take steps to inform the beneficiaries by writing letters,” Jayaram said.

“In urban areas floods happen during the rainy season and smooth flow of water is to be ensured by taking appropriate steps and compensations should be paid to those who are affected. See that undeserving is not paid compensation,” he added.

DC Dr. Bagadi Gautham, who too spoke, asked officials to be ready with statistics regarding crop loss because of rain and upload them in “Parihara” software and pay compensation within 24 hours. “Tahsildars should obtain needed documents from beneficiaries and pay compensation immediately. 100 villages have been identified as potentially vulnerable to floods,” he said.

Disclosing that 34 houses in Hunsur taluk, 14 houses in K.R. Nagar taluk and 3 houses in Periyapatana taluk have been completely damaged, he said another 772 houses have been partially damaged. Compensations have already been paid to 533 houses, the DC added.

The Joint Director of Agriculture Department informed the meeting that in May, the district has recorded 166% more rain. Seeding is done already in about 48% and crops have been damaged in 251 hectares. Mysuru City Corporation (MCC) Commissioner G. Lakshmikantha Reddy, Zilla Panchayat (ZP) CEO B.R. Poornima, Additional DC Dr. B.S. Manjunathaswamy and other district-level officials of various Departments were present at the meeting.