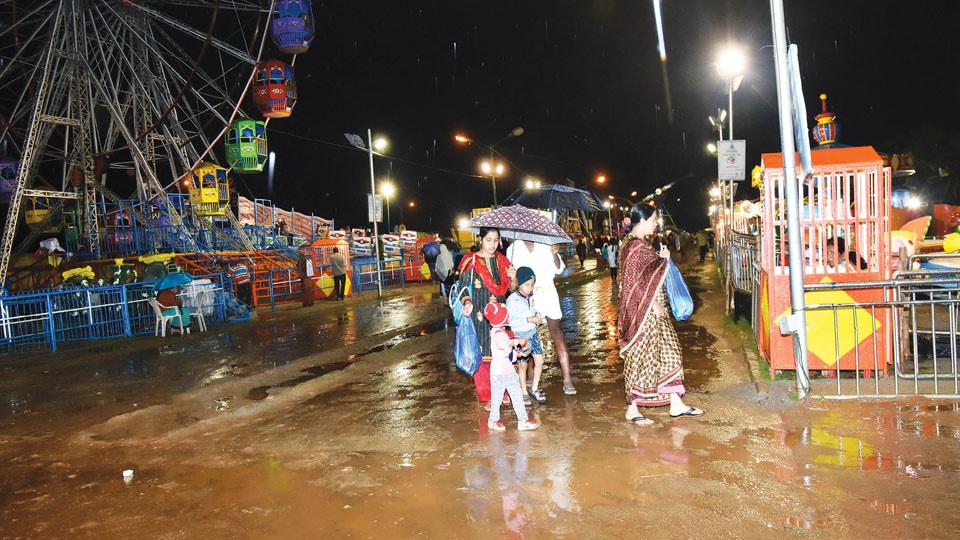 Mysuru: Torrential rains have wreaked havoc in North Karnataka and the entire State has been receiving rainfall since the last two days. The weatherman has predicted more rains in the next three to four days. While the downpour has brought untold misery to the people of North Karnataka, the Mysuru region too is affected.

Though it has not been raining heavily, intermittent rains and cloudy weather have deterred people from venturing out of their homes and head to places like Dasara Exhibition at Doddakere Maidan. Though the initial response for the Exhibition was good, there has been a reduced footfall since the last couple of days, thanks to the rain that promptly lashes city every evening.

Several places at the Exhibition are water-logged and at some places there is slush, preventing free movement of visitors. Rainwater has gathered at Amusement Park, eatery houses and pedestrian walkways.

This year, the Exhibition began late as every year and did not coincide with the Dasara inauguration.

Though empty stalls greeted visitors initially, footfalls picked up and peaked on Ayudha Puja and Vijayadashami where more than 30,000 visitors thronging the private and Government stalls. Since it was a long weekend, footfall remained constant for a couple of days. But the number of visitors dwindled after the Vijayadashami procession.

Speaking to Star of Mysore, Lokesh, who has bagged the contract to collect tickets at Exhibition Gate, said that initially, the response was very good but the numbers reduced. “We get maximum visitors in the evening and the daily rain has turned away visitors. Last Saturday, we recorded a footfall of 25,000 to 30,000 and on Sunday, the number came down to 13,000. Yesterday, there were only 1,400 visitors,” he revealed.

Delhi Masala Papad outlet owner Aslam Khan too said that his stall has received fewer footfalls this year when compared to the numbers last year. “Last year, we did good business by this time. This time, we have 38 workers and we have paid a hefty stall fees. It is difficult to manage the inventory costs if it rains continuously like this,” he added.

Khan added that last Saturday and Sunday he sold items worth Rs.40,000 to Rs.45,000. “People flocked to eat hot Delhi Masala Papad and spicy chilly bajji. “We hope that the business will pick up if the rain stops,” he said.

Similar sentiments were echoed by Yathiraj who has kept a steel vessel and kitchen items outlet and Saravana who has also kept a household item stall. “We have been participating in the exhibition since the last three years and this October, the footfall is less. People are not ready to come to the expo due to rain. We sell good quality items at cheaper rates when compared to the markets outside. Still people are not ready to come here,” they said.