Home » News » One more flight from Mysuru to Hyderabad this Deepavali 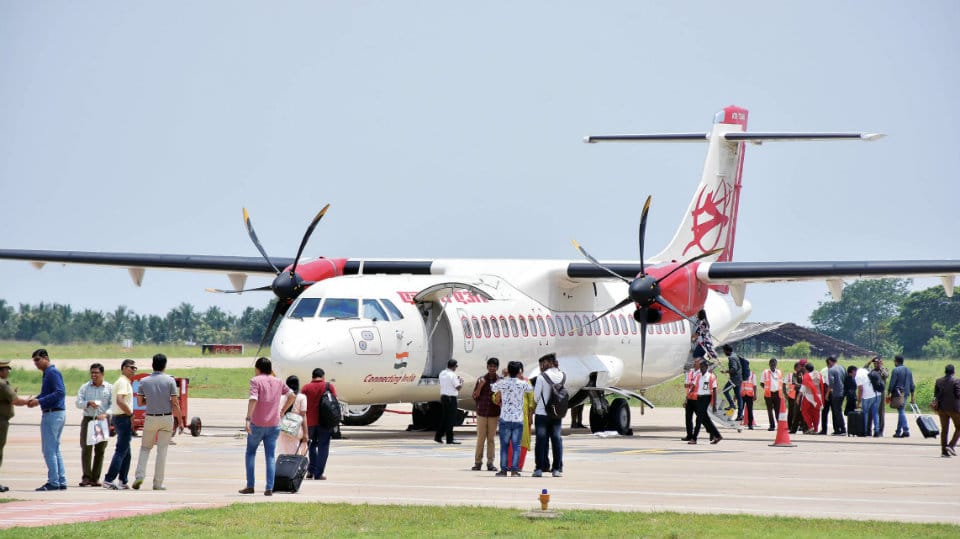 One more flight from Mysuru to Hyderabad this Deepavali

Mysuru: This Deepavali, there will be one more flight to Hyderabad in addition to the existing two flights. The Indigo flight will start operating from Oct. 27 (Sunday) and ticket bookings are open. Increased flights under Regional Connectivity Scheme UDAN (Ude Desh Ke Aam Nagarik) launched by the Modi Government has boosted air traffic, inviting more flight operators to choose Mysuru.

UDAN bolsters regional connectivity under “Connecting India,” and for Mysuru, it has provided a new lease of life to the Airport at Mandakalli that was once a grazing land for cattle five years ago.

At present, the Airport handles flights to Kochi, Goa, two flights to Hyderabad and Bengaluru. These flights are operated by Alliance Air, a wholly-owned subsidiary of Air India. This apart, TruJet operates flights to Chennai twice a day. (See table). The flights to Goa, Hyderabad, Kochi and Chennai is operational seven days a week but the flight service to Bengaluru is only five days a week – Monday, Wednesday, Friday, Saturday and Sunday.

Now, one more flight has been added to Hyderabad. It will arrive at the Mysore Airport at 7.40 pm and will depart Mysuru at 8.10 pm. This will be a direct flight to Hyderabad, said Mysore Airport Director Manjunath. The flight is expected to make a landing in Hyderabad at 9.55 pm.

Speaking to Star of Mysore this morning, Manjunath said that the inaugural flight on the new route will be on Oct. 27 and Indigo Airlines officials have visited Mysore Airport and have inspected passenger facilities and the Air Traffic Control facilities. The Indigo flight will be a 72-seater ATR aircraft.

One more flight operator TruJet has also evinced keen interest in operating daily flights to Belagavi from Mysuru. However, modalities, timings and the route are yet to be finalised, Manjunath added. “The response is positive but we will have to finalise the finer details,” he added.

TruJet already has a slot for a flight from Chennai to Mysuru. The same flight will connect Mysuru with Belagavi, giving the people of Mysuru and surrounding areas an easy and a convenient air link to the North Karnataka region.

Manjunath said that the occupancy rate of the flights of both incoming and outgoing is going up every day and is touching as much as 75 percent to 85 percent, triggering a new interest among airlines keen to operate from Mysuru. The reason for people choosing to fly to Hyderabad, Chennai, Goa or Kochi is because many will catch connecting flights to other destinations that do not have direct access from Mysuru.

“The demand for flights from Mysuru started once Mysuru-Kodagu MP Pratap Simha took keen interest and saw to it that under the UDAN scheme the flights were introduced and this saw a healthy rise in the occupancy rate,” he said.

However, the only region where there is not much occupancy is the Mysuru-Bengaluru flight which has seen an occupancy rate of just 35 to 40 percent,” he added. “This is because, travellers prefer car, bus and train to reach Bengaluru considering the travel time from Mysuru to Mysore Airport and then from Bengaluru Airport to Bengaluru city,” he said.