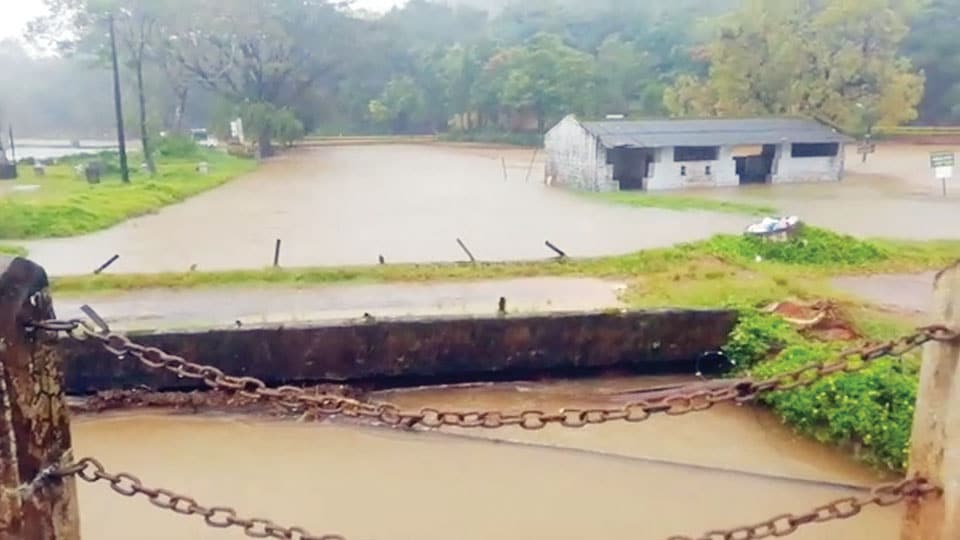 Madikeri: Heavy rain, coupled with gusty winds, is lashing Kodagu throwing life out of gear in the last 48 hours. The district, that is just coming out of devastating floods and landslides in August this year, is again being pounded by unseasonal showers.

This morning’s forecast by District Agromet Unit, Indian Council of Agricultural Research (ICAR) Krishi Vigyan Kendra at Gonikoppal, has predicted that heavy rainfall with gusty winds is likely to continue till tomorrow (Tuesday) and is likely to reduce gradually later.

Electricity lines and telephone networks have been snapped at many places and landslides have been reported from Indiranagar at Madikeri. Tiled roofs of many houses at Chamundeshwarinagar have been blown away by high-velocity winds.

Though no casualties have been reported, the areas that are hit by rains now are the same places that bore the brunt of nature’s fury in 2018 and 2019. Farmers, who had just finished agricultural activities including paddy sowing and transplantation are a worried lot as the crop is under water and may not see the light of the day even if the flood waters recede.

Bhagamandala, Ayyangeri and Talacauvery are the epicentre of the rain and Bhagamandala-Ayyangeri Road has been blocked and three feet of water is flowing on the road. Vehicular movement has been stopped and the Triveni Sangama — a confluence of River Cauvery, Kannike and Sujyothi — at Bhagamandala has been completely submerged.

In Mysuru, rain was intermittent, but the outflow from Kabini Reservoir in H.D. Kote taluk was stepped up yesterday. This follows heavy rain in Kerala’s Wayanad and surrounding areas that are the main catchments for Kabini.

As a result, the Dam authorities increased the outflow to nearly 35,625 cusecs, while the inflow was at around 28,906 cusecs. The water level in the reservoir was at its maximum of 2,283 feet today.

Harangi, the reservoir that feeds Krishna Raja Sagar (KRS) Dam, today reported an inflow of 8,666 cusecs and an outflow of 12,354 cusecs.

The inflow to KRS Dam in Mandya has also increased with today morning’s water level standing at 124.60 ft as against the full reservoir level of 124.80 feet. Today morning, over 40,000 cusecs of water was released from the Dam and a flood warning has been issued in the wake of the increasing water level in the reservoir. Officials from Cauvery Neeravari Nigam that manages the Dam say that more water will be released as there is high inflow that stood at 27,426 cusecs.