Rains do not deter Mysureans from enjoying cultural programmes

Mysuru: The city roads were a chock-o-block with traffic, even as it was raining incessantly last night. This showed that nothing will deter the people of Mysuru and even the tourists from enjoying the cultural programmes chalked about by the District Administration. In most of the venues people gathered in large numbers enjoying the music and dance programmes of their choice.

However, the focus has always been the Mysore Palace and to perform on the stage there is very special. Yesterday renowned Danseuse Dr. Vasundhara Doraswamy and her troupe mesmerised the audience with their dance-drama titled ‘Vidyunma Danika,’ which is a dance piece from a portion carved on the famous Chennakeshava temple in Belur.

Vasundhara and her troupe brought alive through the dance-drama the rich temple dance carvings in front of a large audience who had gathered in spite of the rains. The dancers who accompanied her included Vidushi Dr. Bhuvaneshwari, students Spoorthi, Aravind, Tanusha, Deepthi Adisesha, Padmashree, Parimala Ramesh, Sinchana, T.S. Lokesh, Soundarya, Neha Manjunath, Preethu Manjunath and Harish Kumar who all gave a stellar performance. They were accompanied on the vocal and instruments by Vidushi Dr. P. Rama, Brahmini Shivaprakash, Haunmanatharaju and Vinay. 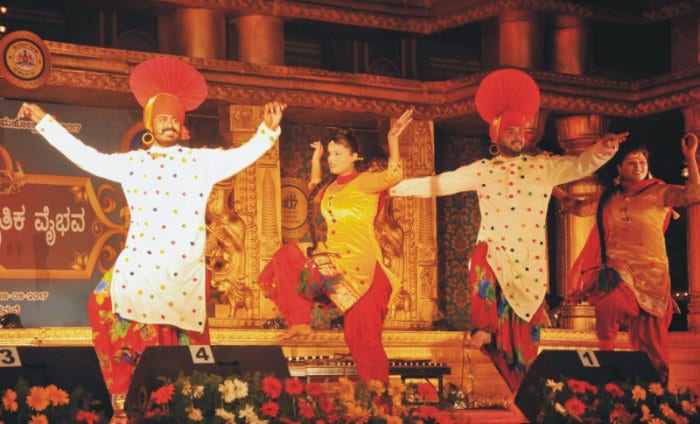 Later, Bengaluru’s Pandit Anooru Ananthakrishna Sharma and team performed ‘Talavadya.’ The earthy, energetic Bhangra dance by the artistes of Punjab South Zone Cultural Centre with their colourful costumes was a treat to the eyes and many were seen foot tapping to the music.

The pain and loss of love and separation and beauty of love in spite of separation was brought out melodiously by one of the most famous Ghazal Singers Ustad Talat Aziz. The audience went rapturous after he sang many popular numbers.

There was good crowd at other cultural venues like Kalamandira where there was a group veena programme, in Jaganmohan Palace where there was light music, saxophone by Bengaluru’s Sridhar and troupe to name a few. Dramas were staged by a few groups at Town Hall and Rangayana also saw Nagaraj Banjara who is creating awareness about environment being felicitated by Rangayana Director Bhagirathi Bai Kadam.