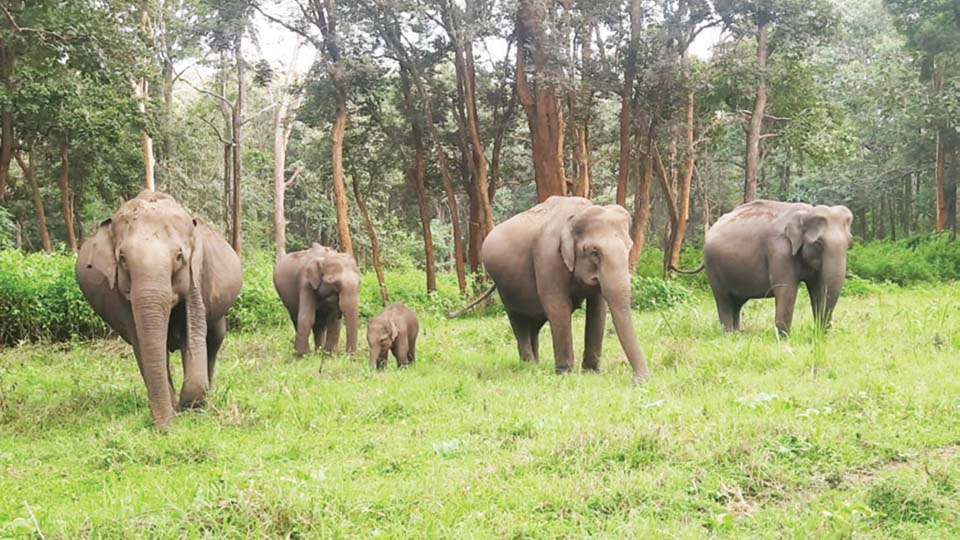 Hanagod: Following continuous rains since a few days in Nagarahole Reserve Forest and surrounding places, the forest is now filled with greenery and the lakes and ponds in the reserve forest in full to the brim.

If one had visited the forest about two months back, most of the lakes and ponds had gone dry depriving wild animals of water to quench their thirst.

The Forest that is spread across 640 sq km is known for more than 250 varieties of birds and wild animals like deer, Asian elephants, wild boars, leopards, tigers, langurs etc., which are now moving around the forest freely.

Sighting wild animals in herds and groups is a visual treat to safari goers at Nagarahole, who are now even spotting tigers and leopards at the waterholes. The cool climate had brought the mischievous character of monkeys out of them, which are now seen swinging and jumping from one tree to another. The pleasant sounds made by birds now, the friendly fights of elephants, jumping deers and elephant herds playing in water is a sight to behold.

The rains have not only filled ponds and lakes but have also created small streams which pass inside the forest providing water to wild animals in the core area. Meanwhile, Veeranahosahalli Range Forest Officer (RFO) Naman Narayana Nayak said that the rains apart from filling lakes and ponds had also given birth to a lot of aquifers (a layer of rock or soil that can take in and hold water).