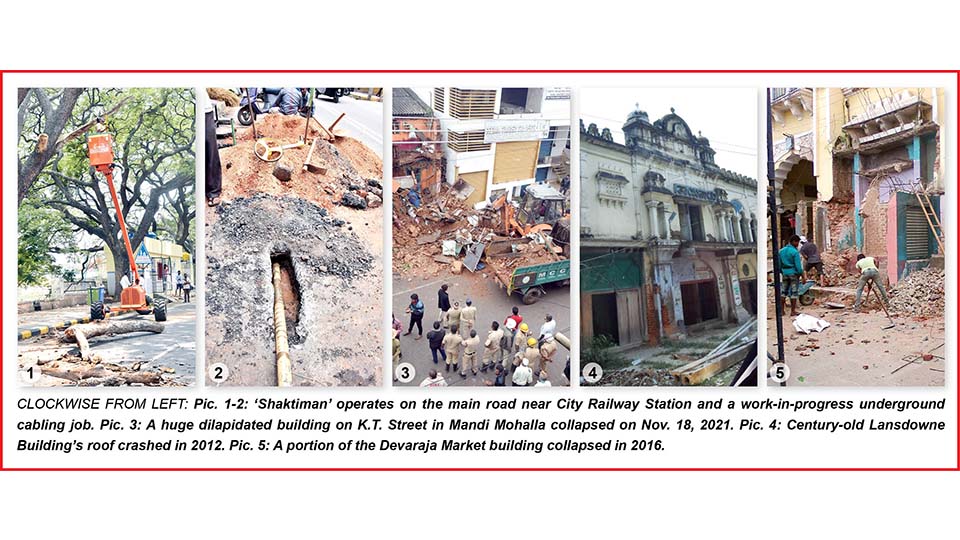 We all love a good monsoon, but we also dread it. From mid-June through the end of September, the monsoon brings torrential rain, violent thunderstorms and high wind, turning trees and old properties into death traps.

This year, the Mysuru City Corporation (MCC) has been proactive and has surveyed to identify weak trees that pose a threat to safety. They’re awaiting the Forest Department’s approval to prune and cut them. We worry that all this pruning and cutting will become unsafe to the public. Will ‘Shaktiman’ end up becoming a traffic hazard?

‘Shaktiman’ is the name of a tree pruning machine the MCC bought in 2019. MCC was the first civic body in Karnataka to have this machine that they said could be operated by one man and cut trees without posing a risk, even in crowded places. While they say there is no risk, a colossal machine operated by a human being in the daytime while blocking traffic and trying to cut and prune trees is a risk.

Hence, we must ask, why are public works not undertaken during the night? In most countries, all city maintenance work, from cleaning the roads to pruning the trees, is done at night when the public is least disturbed, so why not follow the same practice here in our city?

In 2019, the Delhi Transport Minister Gopal Rai directed all three, Delhi Metro Rail Corporation (DMRC), Public Works Department (PWD) and Delhi Jal Board, to carry out construction and repair works only at night.

This 2022, tree pruning and cutting drive took me back 11 years ago to 2011, when an unprofessional and irresponsible public work led to the death of my friend Prarthana Shenoy, then just (33) and a young mother of two.

In 2011, Prarthana and her family were driving on National Highway 212, (now renamed as NH 766) which goes through Gundlupet. They were on their way to Ooty for a holiday. They were stopped and asked to wait as a huge banyan tree was being cut for road widening.

The unscientific tree cutting method brought the massive tree crashing on Prarthana’s car. She lost her life. Two children were left without a mother.

All of us have seen how, at 9 am peak hour traffic, Government contractors paint a zebra crossing blocking one part of the road and creating a bottleneck. Laying cables in the middle of the day is a common sight across the city. Why can’t these activities be conducted at night or during the wee hours of the morning when vehicular traffic is at its minimum?

During these hours, the public is not disturbed, the economy is not affected, life is not at risk and road rage is non-existent. Moreover, it is easier to see a well-lit coloured light and warning signs from a distance at night than during the day.

But then we do not follow proper safety protocol either. We do not place appropriately sized signages and warning boards much ahead of the actual location. Because of this, motorists do not have enough time to react and slow down! Every public work suddenly pops up like a jack in the box.

As monsoon approaches, our city has another problem, weak structures that tend to collapse. In December 2021, after a few houses caved in, the MCC conducted a survey and found our city has 173 buildings in a dilapidated state. Which means they are inhabitable and need to be demolished.

Based on the report, the MCC has begun issuing notices to the owners of such buildings. But the owners have failed to act. The MCC now says that using its powers bestowed by the Karnataka Municipalities Act, it plans to raze the structures on its own and collect costs incurred for demolition from the building owners. We doubt this will happen. Instead, looks like the buildings will collapse, people will die, and taxpayers will pay compensation, just like it happened in Lansdowne Building.

In the case of heritage structures like Devaraja Market and Lansdowne Building, we have to be    honest and ask ourselves — do we want them for their heritage value or for cheap rent and location? If the answer is heritage value, restore them for visual appeal and don’t let them out for business. If it is for both, concern for heritage and “capitalist” endeavour of having a shop in a prime business area for cheap rent, then be ready to pay to restore these structures, which is a costly affair.

All buildings get old and need fixing or rebuilding, or restoring as in the case of heritage structures, but it should also be viable to fix them. It is unfair to spend crores and crores on a building that will not have any return on investment. And in a developing nation like ours, where money is needed in so many other spheres, we can’t afford to waste money on restoring structures, only for them to be rented out for a pittance.

So if these two heritage structures can be restored on a fiscally reasonable budget and the tenants agree to pay the rent amount worthy of a shop in the Central Business District, it makes sense to go ahead. Else it only makes sense to rebuild these structures, retaining the same design and grandeur of the original structures with ample parking space and other public amenities, which are lacking presently. It will probably cost less than restoring it.

Safety should always be the priority in public spaces. When Barack Obama came to India, some may remember that the Indian government made sure all the coconut trees around Gandhi Museum were trimmed, and the coconuts were removed. The officer in charge said, “Why take a chance?” Why aren’t the same safety measures applied to our citizens?

The Indian Penal Code 303(A) says: “Whoever causes the death of any person by doing any rash or negligent act not amounting to culpable homicide, shall be punished with imprisonment or fine, or both.” This IPC Section applies to the Government too, and maybe it’s time for people to use this law to make sure public works do not become hazardous to the public.

2 COMMENTS ON THIS POST To “Rains, weak trees and buildings”