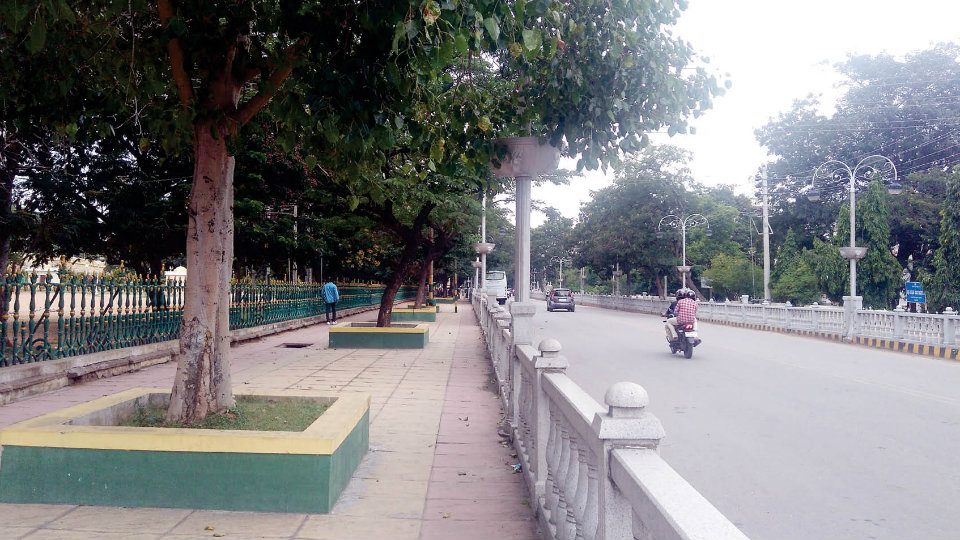 Mysuru: Major roads in the heart of the city and its footpath look spotless and it matches any international standard road in the biggest capitals of the world. It seems the authorities concerned are doing a fine job of maintaining the standards that proves Mysuru’s ‘Cleanest City’ tag is fully justified.

Yes, this is the road that leads to the historic Mysore Palace South Gate (Varaha Gate). If one walks on the footpath on this road between B. Rachaiah Circle and Pailwan Rudra alias Mooga Circle, the surrounding looks very clean.

However, if one is a little more watchful and closely peeps inside at the trees surrounded by raised cement borders, then the reality hits hard. The pit at the place where the trunk ends and roots start is filled with plastics and other waste.

On this road there are nearly 15 trees and around most of the trees, concrete square platform is constructed. But instead of filling it up with mud and levelling it off, most of them have been left open, as if to invite waste dumping.

This neglect is what is causing problems to these trees. The footpath on this road is also conducive to jay walking besides it is a famous tourist spot. Hence, many of them just throw plastic, eatable waste, liquor packs, torn slippers and shoes into the pits causing environmental harm to trees. The platforms which should have been its saviours are now turning out to be its nemesis.

The footpath, adorned with heritage streetlights with the face of lions looking down, adds to the allure of the street. On such a road, trees instead of providing life-giving oxygen to the people are forced to harbour harmful plastic and other waste, spoiling the beauty of the area.

As one walks on the footpath, one finds the first tree where the pit is levelled with mud and hence there is no waste collected here. However, if one walks further one can see the rubbish accumulated in the pits of the trees. The stench of urine assails one’s nose as one moves towards Pailwan Rudra Circle attached to the Gun House compound. This has resulted in the pedestrians avoiding the footpath altogether even though the stretch is shady with branches of trees offering a cool canopy.

It is sad to see the balustrades used for the Raja Marga lying broken in these platforms. They are also filled with wooden planks that were found near the Maramma Temple footpath on the eastern side of the Palace. This is resulting in the weakening of the bottom of the tree. The MCC authorities are exhibiting their ignorance by not bothering to look at such blatant violations.

In 2014, a weak peepal tree inside the Maramma temple was uprooted and came crashing down in which two people were killed. In spite of such examples, the MCC has not bothered to take remedial steps and see that the trees are not uprooted as they eventually would because of the blockage caused by the collection of waste. Probably they are waiting for one more disaster to strike to wake up.

The question that arises here is why nobody is taking responsibility for keeping the area around the world famous Mysore Palace in tip-top condition. On one hand one finds waste being thrown into the pits of the trees and on the other hand, it is shocking to see footpath tiles broken and lying unattended for months.  There are openings in many places where the tiles have broken resulting in gaping holes and here also waste collect and block the drains thus preventing free flow of rainwater. 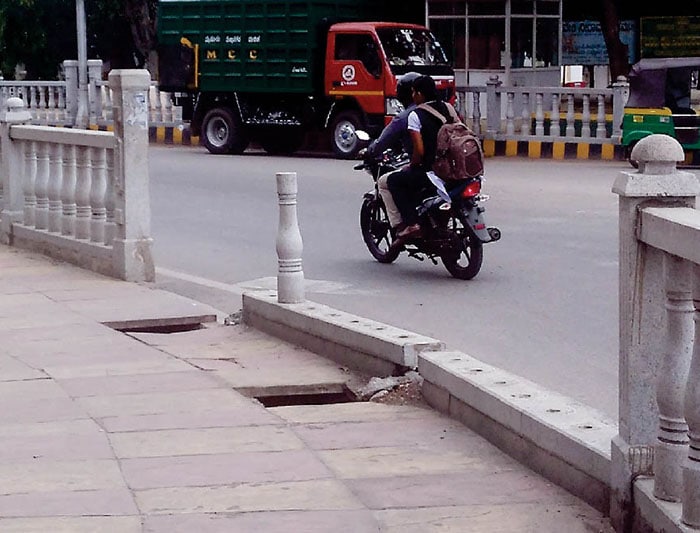 The bus stand near the South Gate entrance to the Palace has been designed to match the heritage style. The roof has also been designed in a special way using tiles. However, it is sad to see that half of the tiles are broken. People who come and sit here waiting for buses seeking shelter from rain and sun are facing the danger of being hit by flying tiles due to heavy rain accompanied by strong winds.