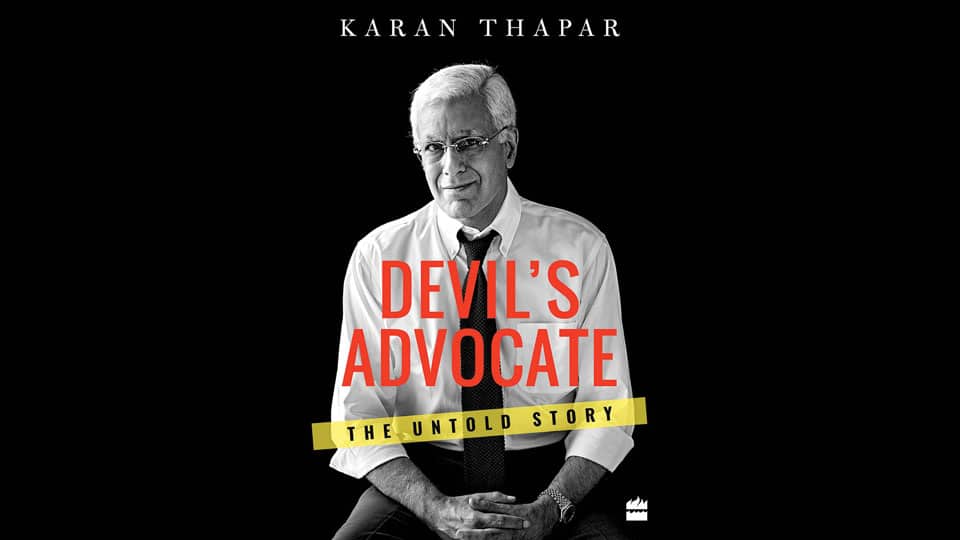 It was a wish fulfilment when I found the book “Devil’s Advocate: The Untold Story” by Karan Thapar, the TV Presenter-Interviewer we know, on my office desk. When I read about this book being published, I wanted to buy it but could not find time. And then it landed on my table, thanks to my son in Bengaluru.

Karan Thapar’s interviews were of a class apart and would hold the viewers riveted to the TV screen even as the interviewee seemed nervous facing him. Sometimes quivering like a blade of grass in the wind.

When I finished reading the book, I was convinced that the saying ‘A rolling stone gathers no moss’ is bunk. Having passed through the corridors of The Doon School, Dehradun and Cambridge in the UK, he has changed jobs any number of times, yet made his fortune — name, fame and money. He is a versatile journalist par excellence, absolutely no doubt. He worked as a Foreign Correspondent with The Times, London. And then entered TV working with London Weekend Television (LWT).

Interestingly, Karan Thapar returned to India in 1991 at the instance of Rajiv Gandhi who was the Prime Minister then. About it later.

Among his siblings, three sisters, he was the last one to arrive — to the manor born. A family well connected to the high and mighty of the ruling elite — Nehrus included. His father was the Chief of Indian Army General P.N. Thapar. Karan was born on 5th November 1955 in Srinagar when his father was 50 years old.  Obviously, his battle for a boy was that long and determined.When everyone was expecting a ‘fourth daughter’ he surprised them so much so his parents had arranged to leave behind this ‘fourth daughter’ behind with a Nanny and his (her) grandmother when they would depart six weeks later for a year in London. This plan now stood changed and the little hero of the family too accompanied the parents to London. Rest is history, as they say.

At age two-and-a-half, he was put into convent school in Shimla. Later when his father was the Indian Ambassador in Afghanistan, he was admitted to the American School in Kabul. From here to Dehradun — the famous Doon School of the super rich and the powerful. Here he befriended Vikram Seth, the famous author writing in English (A Suitable Boy), Sanjay Gandhi and others.

It appears at his time in Doon School (acronym is Doscos), those who wanted to go for College had to do their Finishing School. Karan Thapar went to a Public School in England. Where else? He says that was because his Senior Cambridge results had won him a scholarship to complete his A-levels in Britain. Apparently, Karan must have been a brilliant student. Could be, this was the reason that his next stop was Cambridge and thereafter remained in England for over ten long years working for The Times, London, as Foreign Correspondent and later as TV Producer and Presenter with LWT.

For our journalists, here is a learning opportunity or is it an opportunity for introspection and correction? Karan Thapar was part of LWT team at 10 Downing Street to record an interview of the then Prime Minister Margaret Thatcher. She was asked by a London boy, Cockney redhead, as they say:

‘When do you agree to give an interview and when do you refuse?’

Though she was surprised, she did not duck or parry the question like some of our politicians do. She said:

‘When I am in trouble, when things are going wrong and when my stock is falling, I say yes.’

Pausing for effect, she continued, ‘But when it is smooth sailing, I prefer to keep silent.’

‘Shouldn’t it be the other way round?’, asked the redhead.

‘When things seem to be collapsing, I need to prove I’m in charge and that I have the answers. I also need to re-assure people. That’s the time to speak out. But if you do so when the going is good, chances are you’ll put your foot in your mouth and fall over your own feet. At such times it’s better to keep mum.’

Narrating this incident, Karan Thapar says, ‘How true. Unfortunately, in India, our politicians do the opposite. They choose to crow whenever they can and thus invite misfortune.’

Should I add to this truth uttered by Karan Thapar? Hope, our politicians hear him and also read this book.

Karan Thapar writes about his friendship and close contacts with VIPs like Benazir Bhutto, Sanjay Gandhi, Aung San Suu Kyi (of Myanmar), L.K. Advani and others. Like a good raconteur he narrates his experience with some of the VIP interviewees like Prime Ministers, Presidents, Chief Ministers, Cricketers and other lesser mortals.

I must mention here about Indira Gandhi, in 1976 during Emergency, taking Karan Thapar and his sisters to see one of The Pink Panther films at Rashtrapati Bhavan. Before leaving for the cinema, his sister Premila, who was to go for a quick pee (to the loo) asked Indira Gandhi how she managed on her travels. How she managed to answer the nature’s call. Here is what Indira Gandhi said:

‘It’s a dreadful problem for every woman politician. Unlike men, we can’t go behind a tree! So I drink all the water I need last thing at night in the hope that it’s out of the system by the morning.’

Our women politicians may make note of this solution for a woman’s natural problem !

It was Rajiv Gandhi, the Prime Minister, who made Karan Thapar to return to India after his wife Nisha Thapar’s death. Karan was given a job in I&B and Doordarshan with the rank of Secretary for a time. It was again Rajiv who got him the job in Hindustan Times and its HTV when he returned to India for good in early 1991. There was no looking back thereafter. It was his Sunday night one-to-one current affair interview Devil’s Advocate, launched by CNN-IBN in 2006 that enabled him to be seen, heard and become famous all over India among English TV news watchers.

Karan is also writing a weekly column to Hindustan Times called ‘Sunday Sentiments.’ While his earlier books ‘Sunday Sentiments’, ‘More Salt Than Pepper’ and ‘Face To Face India’ were all collection of his TV interviews and newspaper articles, this book, Devil’s Advocate, is semi-autobiographical and highly readable.

However, I must say this. I was shocked reading about his role as Man Friday or a go-between for L.K. Advani at a time when Advani was the Home Minister and Deputy Prime Minister, driving his friend, the Pakistan High Commissioner in India Ashraf Jehangir Qazi, to Advani’s house at late night in a secret manner etc. What did they talk one-to-one in strict privacy? Well, at the end we got Kargil. It shows how porus our intelligence service is and how pliable our politicians are.

Remember Morarji Desai being accused of allowing United States to install a nuclear surveillance facility in the Indian Himalayas to spy on China?

And here is a gem about a tattletale Pavan Varma, the well-known diplomat and politician (JD-U). He tells Karan Thapar about what was told to Pavan Varma by Prashanth Kishore, the wizard of election planning who worked for BJP in 2014 and brought victory.

“Pavan added, ‘Modi said to Prashanth that he will never forgive you (Karan Thapar) and when he gets an opportunity he will take his revenge’.”

Karan Thapar believes Pavan Varma and Prashanth Kishore and writes that was the reason why BJP Party Spokespersons were told not to appear in his programmes and Amit Shah refused to give him interview.

At the end of the book, I got the feeling that Dr. Subramanian Swamy, BJP Vice-President and MP, was right when he told Karan Thapar on his face in a TV interview, “Frankly I don’t trust most journalists who belong to Anglo-Saxon stock.’ The ‘award-wapsi gang.’

2 COMMENTS ON THIS POST To “‘Devil’s Advocate’ quoting Bible!”