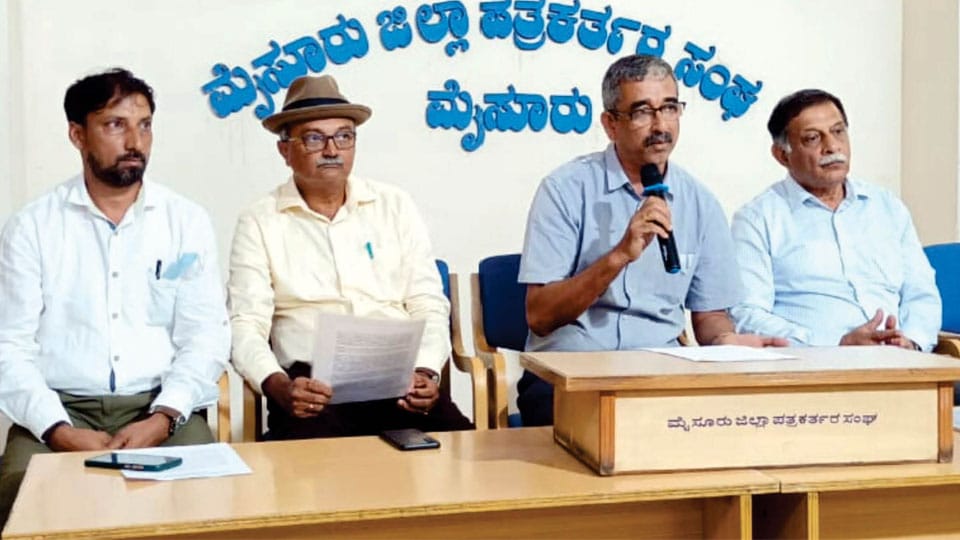 Government must study uniqueness of each district and frame laws: Kodagu Samrakshana Vedike

Mysore/Mysuru: Concerned over the recent announcement by Revenue Minister R. Ashoka stating that agricultural land conversions across Karnataka would be approved within three days and the required amendments would be brought to the Karnataka Land Revenue Act, the Kodagu Samrakshana Vedike has said that this would be a disaster for Kodagu, the principal catchment area of River Cauvery.

Addressing a press conference at Pathrakarthara Bhavan in city this morning, President of Kodagu Samrakshana Vedike Chottekmada Rajeev Bopaiah said that the Government move will destroy hilly terrains and ecologically-sensitive regions such as Kodagu.

“Large scale land conversion in Kodagu for sites and layouts will invite large numbers of people from outside the State into Kodagu and exert extreme pressure on potable drinking water and water for agriculture and industry. It will kill the River Cauvery that is a lifeline of Karnataka,” he said.

Burning problems ignored; focus on new roads:Requesting support from Kodagu MLAs Appachu Ranjan, K.G. Bopaiah, MP Pratap Simha and MLCs Veena Achaiah and Suja Kushalappa, the Vedike appealed to them to save the birthplace of Cauvery from destruction due to rampant land conversions. “Unfortunately, the burning problems of Kodagu like human-animal conflict, land conversion, Pouthi Khata and electricity are ignored by the elected representatives and they are interested in only developing new highways, further destroying the landscape,” they said.

The Vedike demanded that the Government must act immediately to avoid destruction of Kodagu. “Unfortunately, many politicians and political leaders are involved in land conversion in Kodagu and those DCs who resist attempts to convert land are being transferred within three months and DCs who act favourably to the politicians are brought in,” Rajeev Bopaiah alleged.

“We have seen how Kodagu was ravaged by floods in 2018 and 2019 abetted by unbridled urbanisation and infrastructure development to promote tourism. Sale of agricultural land for non-agricultural purposes will have devastating consequences as reckless urbanisation has already caused a negative impact on the environment as evident in the floods and landslides,” he said.

Bearing on water: “The government move makes it easy for any individual, industrialist or real estate stakeholders to directly approach farmers and purchase land. It’s not just about land in Kodagu but this will also have a bearing on water and its implications will be felt in the downstream region of the State like Mysuru and Mandya, impacting food security and agriculture,” Rajeev Bopaiah added.

The Vedike has demanded that instead of passing land laws that are applicable across the State, the Government should study the uniqueness of each district and frame laws according to the local environment and ecology. “We will take our movement to the next level that will include a boycott of elections,” the Vedike has warned.