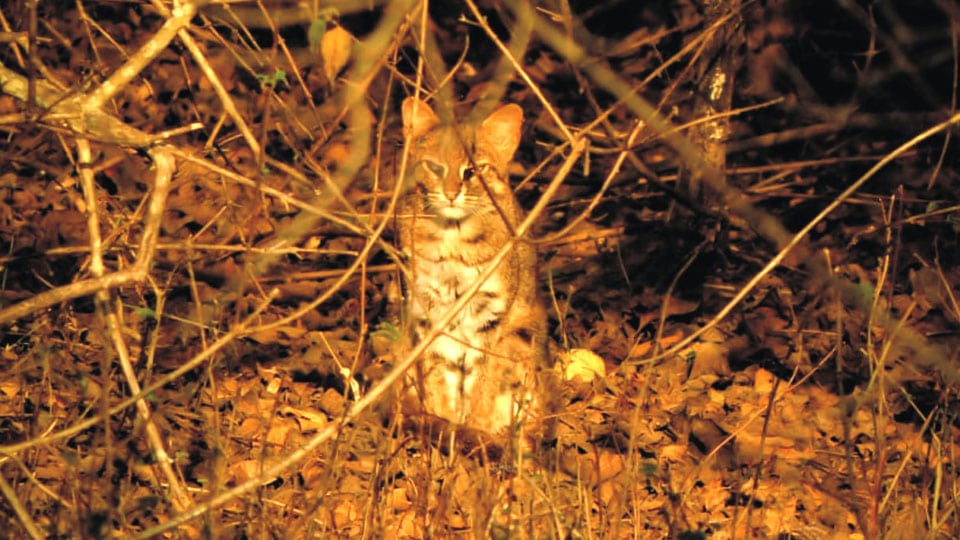 Mysore/Mysuru: A rare rusty-spotted cat has been sighted inside the Bandipur Tiger Reserve. Reputed to be the smallest wild cat at about half the size of its domestic cousin, the rusty-spotted species shares its habitat with tigers and leopards inside the Reserve.

The photo was clicked by Abdul Shez. While the tiger is closely monitored, little is known about the status of the rusty spotted cat (Prionailurus rubiginosus). The species has been recorded in India and Sri Lanka but it has been sighted in Nepal also in recent times. Many wildlife experts describe it as the smallest cat species in the wild, though some say the African black-footed cat qualifies for that status.

The rusty-spotted cat has a short reddish grey fur over most of the body with rusty spots on the back and flanks. Four blackish lines run over the eyes, and two of them extend over the neck.

Six dark streaks are on each side of the head, extending over the cheeks and forehead. Its chin, throat, inner side of the limbs and belly are whitish with tiny brownish spots. It has a rusty band on the chest. Its paws and tail are uniform reddish grey.

Since 2016, the global wild rusty-spotted cat population is listed as ‘Near Threatened’ on the IUCN Red List as it is fragmented and affected by loss and destruction of prime habitat, deciduous forests.

IUCN or International Union for Conservation of Nature is the global authority on the status of the natural world and the measures needed to safeguard it.