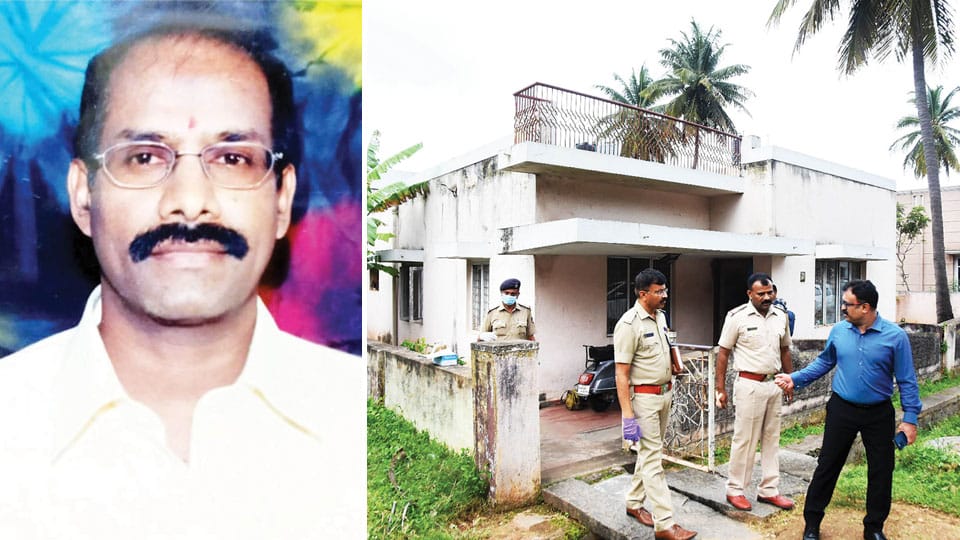 Unable to bear torture on his mother, he had hatched a plot to eliminate his father 15 days back

Mysore/Mysuru: A real estate agent was murdered by his minor son at their residence in city yesterday afternoon.

The deceased is Sampath Kumar (60), a resident of 7th Cross in Brindavan Layout 1st Stage. He was into real estate and incense sticks business and  was residing with his wife Gayathri, a teacher at a private school and his 16-year-old son, who is pursuing his Diploma course.

Initial reports said that a miscreant had barged into the house of Sampath Kumar at about 3.30 pm yesterday and allegedly struck him (Sampath) hard on the head with an iron rod and fled. Sampath is said to have died on the spot.

Speaking to Star of Mysore this noon, City Police Commissioner Dr. Chandragupta said that deceased Sampath Kumar’s minor son is the one who had murdered his father. This was revealed by the accused during interrogation, he added

The City Top Cop said that Sampath Kumar used to physically torture his wife everyday and unable to see this, the minor son had hatched a plot to eliminate his father about 15 days back. He killed his father by hitting him on his head with an iron rod after he returned from the college yesterday afternoon.

After killing his father, the minor son informed his neighbour that a miscreant had killed his father. Believing him, the neighbour called ‘112’ Police helpline. The Police, who rushed to the spot, barricaded the place to prevent people from entering the scene of crime.

Sampath was not a big time realtor. He was selling incense sticks and doubled up as a broker to show houses which were available for sale, rent or lease to customers and was not into any big financial transactions.

Residents, who had gathered near the house last evening, were heard speaking that Sampath had never quarrelled with anyone and expressed why would anyone kill him so brutally.

V.V. Puram Police, who had registered a case, had obtained the statements of Sampath’s wife and son yesterday.

There were doubts that Sampath may have been murdered due to personal rivalry and the Police had begun their investigation in this angle too. But, when the Police interrogated deceased Sampath’s minor son, he spilled the beans.