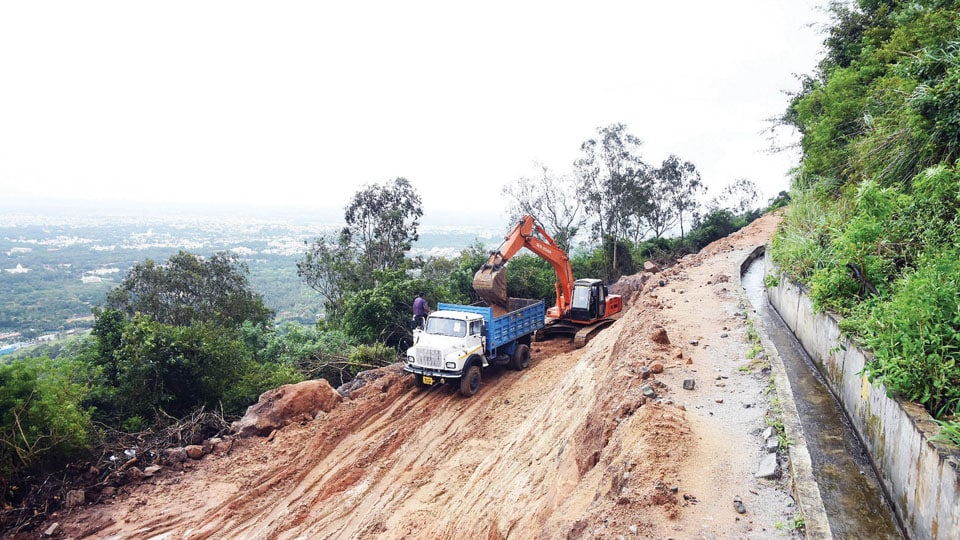 Mysore/Mysuru: The State Government has released Rs. 10 crore to restore the portions of the Nandi Statue Road atop Chamundi Hill that witnessed a series of landslides. Following the fund release, earthworks have begun and trenches are being dug to remove the mud to lay the concrete.

An earth mover has been engaged to remove mud from the damaged portion and according to Public Works Department (PWD), extensive damage has been caused between the View Point and Nandi Statue and the damages extend up to 400 metres. While removing the mud, the earth mover is also excavating huge boulders.

Speaking to Star of Mysore, PWD Assistant Executive Engineer Raju said that works have just started as rains have given a break and the initial task is to remove mud. “This work will take a fortnight or so and we have to factor in the time lost due to rain. All works are being done based on the latest technology and as recommended by the scientists,” he added.

Scientists from the Indian Institute of Science (IISc), Bengaluru have submitted a detailed report on the landslides and how to construct the retaining wall using Geo Trail Technology to prevent future landslides. “We are doing the works in a scientific manner and all works are being done keeping in mind the ecology of the Chamundi Hill,” Raju said.

After the mud is lifted, concrete will be laid. The work will be held under the supervision of scientists. When asked about the allegations that the works are being undertaken in a hush-hush manner, the officer said that it is unfortunate that people are making such allegations as soon as the works began without understanding the facts.

“We have just begun the works and people must understand that we are acting as per scientific recommendations that have been listed after studying the soil patterns in depth. You cannot find fault with everything and without scientific knowledge,” he said.

READ ALSO  Tiny-tots back to School

A portion of Chamundi Hill — between View Point and Nandi Statue — collapsed thrice. While the first landslide occurred on Oct. 20, 2021 near the spot where a massive slip had occurred in 2019. On Oct. 31, 80 percent of the road shrunk in the second slide.  One more landslide occurred on Nov. 4, just 10 mts. away from the Oct. 20 landslide area.

Meanwhile, the Chamundi Betta Ulisi Horata Samithi has alleged that the works are being done in a hush-hush manner without proper analysis.

Former Mayor B.L. Bhyrappa told reporters at Patrakarthara Bhavan yesterday that due to the unscientific nature of the works, there is imminent danger to the other parts of the Hill. The repair works have to be stopped immediately and they should be taken up only after a detailed scientific evaluation and estimate, he said.

Many heavy vehicles are moving on the stretch where landslides have occurred and repeated movement of heavy trucks carrying construction materials will spell danger for the remaining parts of the road. “At the works site, a deep trench extending up to 15 to 20 feet has been dug and it looks like a precarious situation,” he said.

“It is public property and as per the rules, a display board stating the nature of the works, estimated cost, the department carrying out the works and the contractor details have to be published and a signboard has to be erected at the place of works. Here, no such board has been erected and the public does not have any visibility,” he added.

READ ALSO  Dancing on the Rainbow

Bhyrappa demanded the immediate halting of the works and also a ban on heavy vehicle movements. Senior writer Prof. Kalegowda Nagawara, Prabha Nandeesh, Gantaiah and Parashuramegowda of the Samithi were present.

3 COMMENTS ON THIS POST To “Chamundi Hill Road restoration begins”