Home » Columns » Abracadabra By K. B. Ganapathy » Reflecting on Hinduism as a Religion and a Way of Life ! 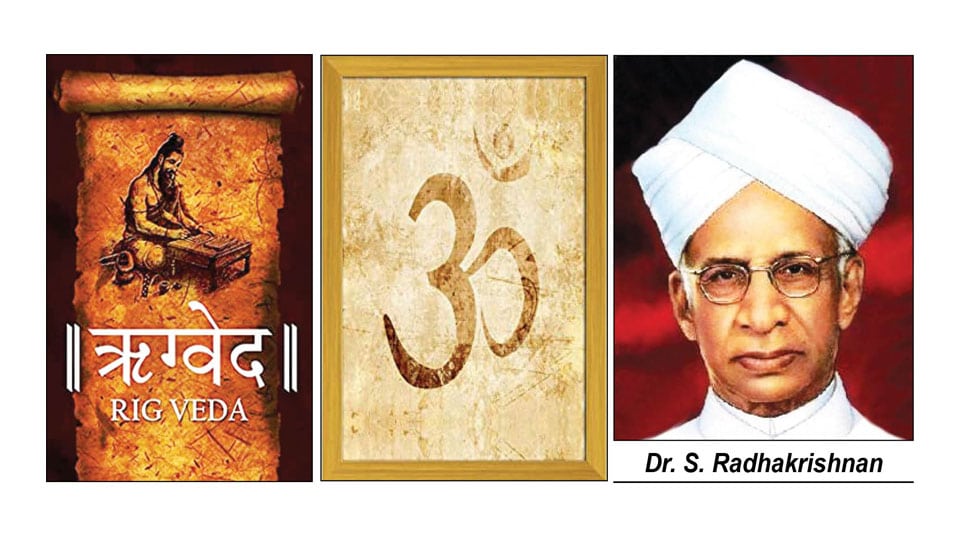 Reflecting on Hinduism as a Religion and a Way of Life !

Hinduism, like any religion, can produce fanatics, and the modern, essentially Secular State of India has to contend with them; but at their best the tradition of India, as reflected in her myths and stories, are all-embracing and tolerant. It has always been recognised in India that there are many paths to Truth, and what is appropriate for one person may not be appropriate to another.”— William Radice, Author of “Myths and  Legends of India” 2001

Of all the religions in the world, Hindu religion seems to me to be absolutely different and multi-dimensional. There is no religion in the world that can compare even remotely with it except those religions that took their birth in the undivided India — like Buddhism, Jainism, Sikhism etc. These religions carry the flavour of the soil of the land of its birth, unlike other religions in India that had taken birth outside India. No wonder, the thoughts and practices, even rituals, of religions born outside ancient India do not sync with Hinduism like Buddhism, Jainism and Sikhism born on Indian soil.

Therefore, there is so much of discussion and debate about the name ‘Hinduism’ itself,  about its etymology and as being derived from that part of India, bordering Afghanistan, then known as Sindh; also attributed to Indus river in Punjab, river Sindhu.  I guess Hinduism is the only religion in the world which is identified and known by its geographical area. Other religions that came from across the borders of India (Hindustan) and also those born in India have their identities known by their founders. But, Hindustan = Hinduism.

Enlightened people of today, like yours truly (pardon my immodesty and audacity) know very well that the so-called Age of Reason as enunciated in 18th century by Thomas Paine, as the time of life when one began to be able to distinguish right from wrong, has not yet arrived even in this 21st century. Well, can we have the refrain “In God We Trust” in an Age of Reason? Look what is happening in America today. Yes, even today Constitutionally they trust in God. Yet Science is the hope. Not God. Anyway, the book Paine wrote had its own contradictions is a fact. But let us not delude ourselves waiting for the Age of Reason to dawn upon this mankind.

As propounded by the French-Philosopher-Author Jean-Paul Sartre, Existentialism is the only truth —That is: Only by (we humans) existing (as we are) and acting in a certain way, do we give meaning to our lives! If we look at ourselves all over the world, in this time of COVID-19, we will be able to appreciate the theory of Jean-Paul Sartre. Let it be.

Why do I ramble about Hinduism of all religions of the world? The provocation or temptation came from my friend N. Raghavan of Raghulal & Co., the Pharmacist of our city, who for whatever reason sent me two books individually produced and hand-bound on Hinduism. One running to 500 pages, titled “Roots”, written by one Kadambi Srinivasan and importantly published in this format by Tirumala Tirupati Devasthanams, Tirupati in 2019. Another, titled “Sanatana Dharma” [An elementary textbook of Hindu religion and ethics]. This was published in digital technology by the Board of Trustees, Central Hindu College, Benares, in  1916.

It is difficult, even impossible, for one to understand this book “Roots” which is in English. However, for those interested in understanding Hinduism, the introduction in Chapter I gives  a fairly good idea as  to what the book will discuss and delineate.

Sanskrit is the language of the Vedas. And Vedas consist of a) Samhitas; b) Brahmanas and c) Upanishads. The metrical hymns in the Rigveda Samhita are regarded as composed by a man and the earliest one.

Let me leave this heavy tome “Roots” here at this and turn my attention to the book “Sanatana Dharma.” Other religions were founded by Prophets giving  the followers of the faith a Holy Book. The book, believed to be immutable and followed to the last word. However, Hinduism is a name that got evolved over a period from “Sanatana Dharma”,  and, as explained in the beginning of this article, given by foreign invaders and marauders. They wanted to give a name to a faith that was nameless and known merely as Sanatana Dharma and gave it the name of its land.

No wonder, Dr. S. Radhakrishnan, the Philosopher of Hindu thoughts, defined this Hinduism or Sanatana Dharma as simply “a way of life.” Which is why, despite disparate languages, food habits, dresses one wore,  ritual practices of the Gods they worshipped, variety of Gods and Goddesses, the variety of festivals in different parts of this Jambu Dweepa, the ‘Akhanda Bharata’ extending beyond the present borders of India (from Kabul to Kamboja, Cambodia) survived. It is an eternal religion of the ancient law and based on Vedas.

The book is too complex for me to understand easily, but not so intricate and incomprehensible like the other one “Roots.” The book “Sanatana Dharma” has many gems on morality, virtue and ethics which if followed in life will give us mukthi, liberation. For example, it says what kind of virtues people should aim at in the particular place and time. Position and power they find themselves is due to divine grace. “As all men have not the power nor the time to find one for themselves, the Will of Ishwara, Shastras have been given to tell us that Will, and so to help us in distinguishing between Right and Wrong…. There are special rules, given in the Shastras (difficult to apply but one must try).” Such as:

1. “To give joy to another is righteousness; to give pain is sin.”

2. “Let not any man do unto another any act that he wished not done to himself by others, knowing it to be painful to himself.”

3. “Let not any one do an act that injureth another, nor any that he feeleth shame to do.”

4. “Let him not do to another what is not good to himself.”

Well, in short, it says watch out on your “Karma.” Bad Karma will haunt you even after death and rebirth.

The third book that I tried to read as important to understand Hinduism was “Brahma Sutra” by Swami Vireswarananda of Ramakrishna Order. I had earlier read another book by a Swamiji which was easy to understand for a simple-minded person. For example, there is a Sutra which asks a question: Why did God create this world?

Answer: Why does a child play?

I was delighted. There was, for sure, no earthly purpose in a child’s play, except probably for self-joy. Since I was also a child I vouch for this explanation. At the end, it is ‘dust unto dust.’

One more interesting information I could glean from this book was about the contrary opinion to the claims of some that Buddha and Mahaveera preceded Ramayana and Mahabharata. They came many years (centuries) after the vedantic period that created these two ‘Itihasa’, epics. It says, “Buddha and Mahaveera also were not the founders of any altogether new schools of philosophy but imbibed much of the thought current in the country at that time.” In short, like Jesus who went about reforming the dogmatic, fanatic, intolerant Judaism and ended up as the founder of a new religion.

It could be that vedantic period must have been intolerant and very exclusive to only the upper-caste (if caste system had existed then) that the land of “Sanatana Dharma” threw up Reformers like Buddha and Mahaveera who in turn became the founders of their own religion. Enough for now.

3 COMMENTS ON THIS POST To “Reflecting on Hinduism as a Religion and a Way of Life !”