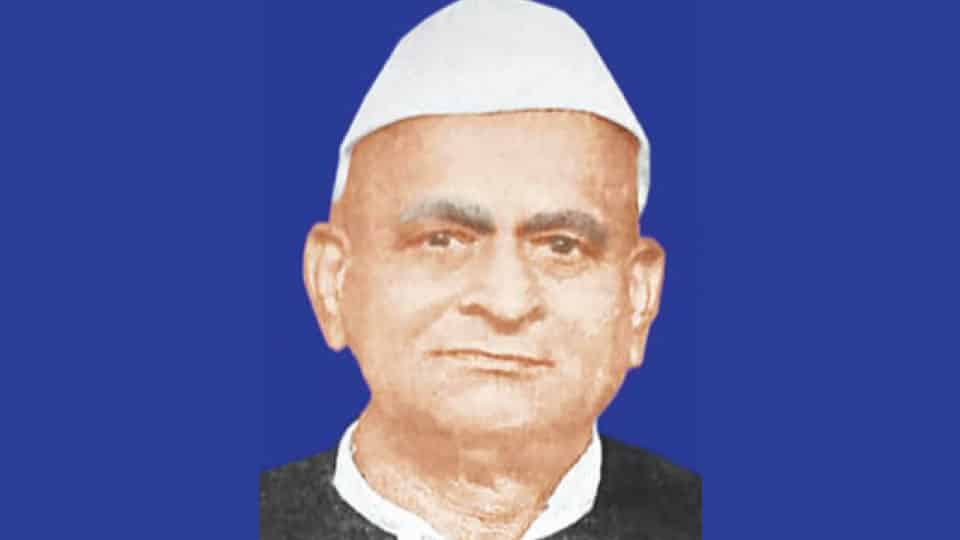 Tagadur Ramachandra Rao was born to Suryanarayanappa and Lakshmamma as third child on Oct. 6, 1898 and he lost his mother at a young age. He and his brother and sister were brought up by the elder sister of his mother Subbamma, a widow.

Ramachandra Rao belonged to Muguru Karnataka Brahmins family at Tagadur in Nanjangud Taluk. Originally, this family hailed from Hanumanapura in Nanjangud. Later, the family moved to Kuderu in Chamarajanagar where his early schooling was completed.  In 1914-15 due to financial problem, they moved to Mysore. His father and his second wife remained in Hanumanapura.

Rao was educated in Marimallappa’s School. At the age of 18, he moved out of Mysore for a pilgrimage and he returned after six months. He started selling pictures of Jallianwala Bagh massacre in 1919 on a trolley and later converted into Swadeshi stall.  He conducted a public condolence procession after the demise of Bal Gangadhar Tilak.

Ramachandra Rao followed Mahatma Gandhi. This earned him the title ‘Father of political unrest in Princely Mysore’ and ‘Gandhi of Mysore’. He was arrested for the first time for a speech against Mysore State and for opposing the visit of Simon Commission in 1928. He became the first political prisoner in Mysore State and later worked with M. Venkatakrishnaiah, popularly known as Thathaiah.

National awakening emerged in Mysore only when Tagadur Ramachandra Rao started his movement against criticism of the Hindu society by Christian missionaries.  On the death of Tilak on Aug. 1, 1920, there was a huge procession of mourners and shops in Mysore were closed; even the District Court was closed by force and Ramachandra Rao led this.

Inspired by Congress leaders like Mudividu Krishna Rao, foreign clothes were burnt and Ramachandra Rao who was selling foreign goods in his shop pushed the entire cart into flames.

Congress Office was opened at Lansdowne Building under the leadership of Ramachandra Rao. He opened Swarajya Mandira at Tagadur in April 1919 and started his activities against conversion of untouchables. He addressed the delegates of Belgaum Congress in 1924 and his work earned appreciation from Madan Mohan Malaviya and Mahatma Gandhi.

Rao started Khaddar Sahakara Sangha at Tagadur in 1925 and helped scores of villagers to earn their livelihood. The agitations he conducted to eradicate untouchability by taking Dalits to the temple of Gunja Narasimhaswamy Temple at T. Narasipur was a notable event. He launched a movement to help Kaniyar community to overcome social evils. He also started ‘Kaniyar Patrike’ which was later banned.

During the visit of Simon Commission, Rao published a booklet ‘Simon Commissionnige Dhikkara’ and addressed a rally and for this, he was jailed for 15 days.

He influenced Mahatma Gandhi to visit Tagadur and Badanavalu on Jan. 5, 1934. There, Gandhiji addressed meetings advocating eradication of untouchability and raised contributions for Harijana Fund. Rao organised a movement to relieve untouchables of their loan commitments. Retired IGP Amble Subrahmanya Iyer helped him.

Rao also participated in Quit India Movement and in 1933 he founded a Ganapathi temple at Harijanakeri of Tagadur. The deity is named ‘Asprishyata Nivaraka Vidya Ganapathy’ and the idol was carved by Sthapati Siddhalinga Swamy.

Some of the movements Rao initiated are cow protection movement and anti-conversion drive. He was instrumental in providing education to Dalits. He published an autobiography “Nanna Alilu Seve.”

Though he could have become a Minister in Mysore State after the freedom struggle, he was not attracted by power. He opted for a quiet life with his children and grandchildren.

N. Sreekanta Kumar Tagadur Ramachandra Rao
Reflecting on Hinduism as a Religion and a Way of Life !
Unidentified body found