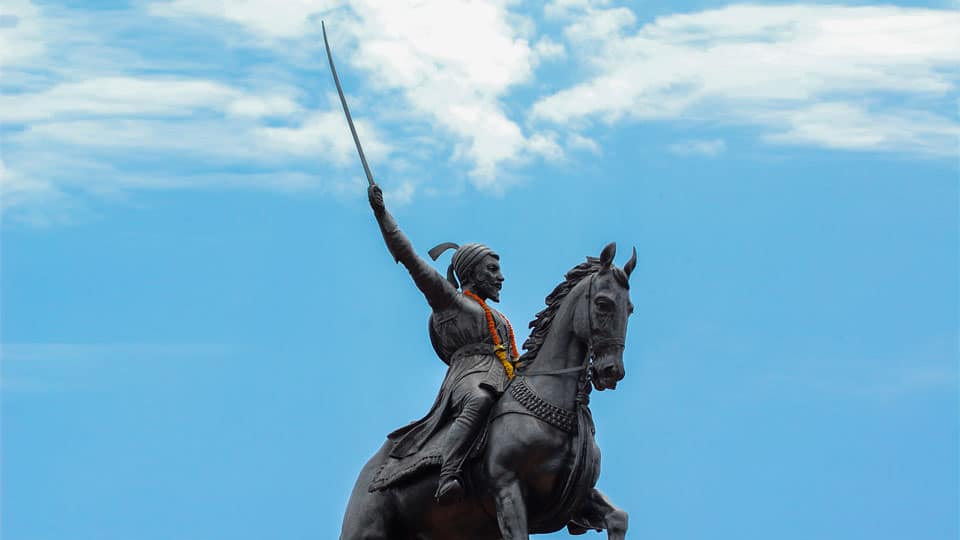 Three days after Shivaji’s arrival, the Emperor was to hold a Durbar and Shivaji was summoned for his first interview with Aurangzeb. Accompanied by Raja Jai Singh’s son Ram Singh, his son Sambhaji and attended by their retainers, Shivaji rode to the main gateway of the Palace. Here, they were asked to dismount. Only Princes of the Mughal blood were allowed to continue on horse back into the Palace enclosure from here.

However, Shivaji’s arrival was heralded by the sound of trumpets from the band room over the gate. From that gate, Shivaji, along with his retainers, proceeded slowly through a red archway that ended at the outer Hall of Audience. On either side of this Hall of Audience could be seen the legendary Mughal gardens and courtiers in their colourful robes. There were pillars covered with gold leaves. In short, the Hall of Audience was magnificently adorned.

A courtier ushered Shivaji and Ram Singh,…… into the Hall of Audience which was attached to the main Palace. This was even more magnificent and spectacular. Just above the Hall of Audience was the balcony of the throne. The throne upon which the Mughal Emperor sat was known as “The Seat of the Shadow of God.”

There was a flowered curtain at the back of the balcony and at about noon, to the sound of the trumpets and drums, this flowered curtain was drawn apart and Emperor Aurangzeb emerged walking in from his private  quarters and took his seat on the throne. Behind him could be seen a massive peacock constructed out of blue sapphires and pearls. Over his head, there were two umbrellas of red velvet sewn with rubies. Wearing white silk robes and a turban made of gold cloth studded with diamonds, over his forehead was an enormous topaz. A group of eunuchs were  providing gentle breeze by stirring the air with specially made fans of yak’s tails and of peacock’s feathers.

Below the balcony, there were railed-in enclosures where invitees were seated according to their status. As if to impress or intimidate the invitees, with the possibility of the Emperor punishing any one in the audience for whatever reason the Emperor deems just, there was a Master Hangman standing in the middle of the audience. He was accompanied by forty other hangmen wearing a different dress and carrying a hatchet (heavy sword) on their shoulders while others carried metal or leather whips. Then began the slow ceremony of the Durbar.

As Emperor Aurangzeb entered the Durbar, all the courtiers stood up, bent their heads and crossed their hands upon their breasts expressing their supreme submission and awe at the royal appearance.

Then began the slow ceremonial protocol of the Durbar. Needless to say, it was elaborate. There was an elephant march in front of the Emperor. One Historian records that there were unicorns in the procession of animals. The power and glory this Mughal Emperor carried in his person was described by a Historian in the following manner: “Occasionally, the Emperor permitted himself a remark, an oral reaction to what he saw. Those around him of his household and eunuchs would lean forward to catch every syllable that he uttered. Then, bending over the balcony railings would repeat the august comment of the Emperor to those below who were craning up their necks to hear those words of the Emperor. They would then express awe saying in refrain Karamat, Karamat (a miracle!) with raised arms.

This required one to bend too low to place the back of the right hand on the ground and then raising the hand slowly till the person stood erect and then placing the palm of the hand on the crown of his head. This “Taslim” had to be repeated thrice and then he made his offering to the Emperor in the form of gifts, jewels or money on a gold tray. If the Emperor was pleased with the gift, he would place his open palm upon it. The tray was then taken behind the throne.

It was 12th of May 1666. After the Ministers had thus presented their gifts, the herald cried aloud, “Shivaji Raja.” Immediately, Shivaji with his son Sambhaji and ten Maratha Officers moved to the enclosure below the balcony carrying a tray with a heap of 2,000 gold mohurs. However, Shivaji, instead of performing the “Taslim,” saluted in a Maratha style by raising his hands in “Salaam” thrice to the Emperor bowing low and touching his forehead with his open hand.

There was a moment’s silence in the hall. The courtiers and Ministers covertly watched the Emperor for his reaction. Aurangzeb was impassive, without any expression on his face. He accepted Shivaji’s gift  by nodding his head and was seen whispering to an official. The official immediately descended from the balcony and approaching Shivaji took him away from the centre of the hall to an enclosure where minor nobility in ranks were standing and went away. It was clear the Emperor was looking for an excuse to revoke the safe conduct assured to Shivaji during his visit to Agra and Durbar. Shivaji was upset. He was addressed by the herald (announcer) as Shivaji Raja. How then could a Raja be made to stand among lesser courtiers?

Shivaji turned round and asked a neighbour and began to protest creating a stir in the assembly. Ram Singh was alarmed and tried to calm Shivaji and promised to persuade the Emperor to treat Shivaji with honour that was his due. Aurangzeb, who noticed the interruption caused by Shivaji, ignored it and directed the officials to proceed with the ceremony of weighing the Emperor against gold to commence. After this ceremony, the Durbar came to an end.

Shivaji and Ram Singh returned together to Jaipur House. Soon, a surprise awaited Shivaji when soldiers on horseback surrounded the Jaipur House followed by foot soldiers and gunners who trained cannons at every door of the House. Shivaji knew what it was all about and he sank upon the divan (sofa) and burst into tears even as his son Sambhaji came to comfort him.

Shivaji thought it was his last farewell to his son as the Emperor might have planned his immediate execution. Surprisingly, it became clear Emperor Aurangzeb had no such plans to execute Shivaji, instead had plans to torture him with suspense. So much so Aurangzeb was sending Shivaji little messages with some fruits for what purpose nobody knew.