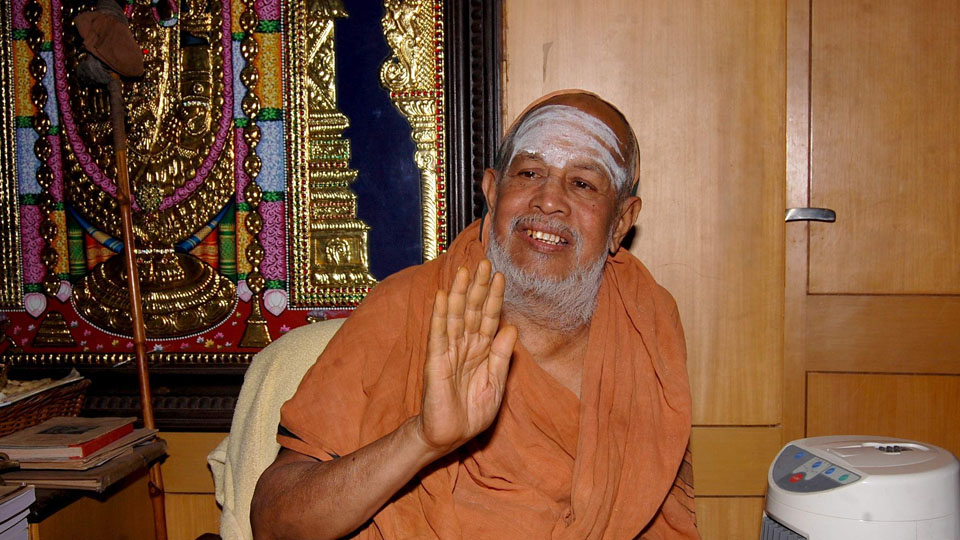 The Bhavan’s Journal of March 31, 2018 has a cover story titled Shradhanjali, on Jagadguru Sri Jayendra Saraswathi, the Seer of the Kanchi Kamakoti Peetham in Tamil Nadu, who crossed the worldly threshold into eternity on Wednesday, the 28th February 2018 at Kanchipuram. He was the 69th head of the centuries-old Mutt. While it is claimed by the Mutt that it was established and sanctified by Adi Shankaracharya, it is disputed by other four Peethas set-up by Adi Shankara in four corners of India, Bharat, Jambu Dweepa. Let it be. He was 83 — born on 18th July 1935.

I had not heard of Jayendra Saraswathi till he made news on August 23, 1987 when he suddenly and secretly, like young Siddhartha the Buddha, left the Kanchi Mutt and went to Talacauvery, the birthplace of River Cauvery in Kodagu, Karnataka. As the news broke, I took a taxi and left for Talacauvery along with a couple of journalists, including late Bharath of The Hindu, early in the morning and interviewed him. But soon the world knew where he was. I think he stayed overnight in Ganapathy Sachchidananda Ashrama, Mysuru, before leaving for Kanchipuram. He was 52-years-old then and I learnt for the first time he was the heir-apparent to the  Mutt.

I found him in that misty morning of the high mountains like any other Brahmin except he was holding that Mantra-Dhanda (sacred stick with a bun-like cloth at one end). A smile kept playing on his face revealing his not-so well-set teeth. The salt-and-pepper-beard was there on his wheat colour visage. He was both magnetic and transparent. Vocal if need be. I had a very good story for Star of Mysore.

Many years later I was invited by a friend to see him at the Shankar Mutt, South of Amba Vilas Palace, near Suttur Mutt building. Our BJP Minister Ananth Kumar was also there. May be, on learning who I was, he was so persuasive that I had to go up to the stage and sit  by his side cross-legged with great pain. He spoke to me incoherently and I mentioned of meeting him at Talacauvery. He was enthralled beaming a broad smile. A spark of child-like quality. Was it Jesus Christ who said that to enter the Kingdom of God one must be like a child — pure and innocent? If so, I am sure Sri Jayendra Saraswathi indeed entered the Kingdom of God (Heaven) on 28th February 2018.

READ ALSO  Here cometh oilman with memories of the past

I had earlier heard of the Sr. Pontiff of the Mutt Sri Chandrashekarendra Saraswathi (who died a centenarian) because of Mrs. Indira Gandhi’s visit to His Holiness whenever she went to Tamil Nadu.

Under Jayendra Saraswathi’s initiative, a movement called ‘Jan Kalyan’ was launched and under it the Mutt rendered many social services including in the field of education, health and other humanitarian activities. The Mutt got national prominence with the involvement of Jayendra Saraswathi in the Ayodhya issue. He was working towards a consensus and reconciliation between the contending parties like what Sri Sri Ravishankar of Art of Living is doing today.

And then all hell broke loose when on November 11, 2004, on Deepavali Day. His Holiness was arrested in Hyderabad on charges of his involvement in a  murder case as a conspirator! A more vindictive and thoughtless prosecution cannot be imagined. But when there is political vested interest and scores to be settled, what can a saint do while the State stigmatises one as a sinner?

The arrest, jailing and the final acquittal of His Holiness dragged on for nine years till the Special Court in Puducherry acquitted all the 22 accused, including Sri Jayendra Saraswathi. This is what we call fate, destiny — in Kannada Vidhi. In Hindu mythology, even Gods and Goddess are not spared by fate or Karma. So be it.

It seems strange and even esoteric that the AIADMK Chief Minister J. Jayalalithaa, a great admirer of the Mutt, had met Sri Jayendra Saraswathi in August 2003 and in just over a year the same Jayalalithaa’s Government arrested His Holiness in November 2004. What could be the reason? It seems a coincidence that the then Chief Minister of Maharashtra Sushil Kumar Shinde too was in the Mutt to meet the Seer. In a politically charged atmosphere, the arrest of a Hindu Seer of such high reputation was seen as a step to gain political mileage for Jayalalithaa to improve her secular image to reach the minorities, including Dalit voters and secure alliance with Congress. She was hoping this would help her get the support of other minor Dravidian parties opposed to DMK. God only Knows.

However, I am deeply saddened about his arrest and the humiliation he suffered. Surprisingly, in his case the legal dictum that ‘one is innocent until proved guilty’ seemed to have been ignored by many. It was, therefore, of some solace that following the Seer’s arrest, former Prime Minister Atal Bihari Vajpayee, former President R. Venkataraman and leaders of different political parties held a protest in New Delhi condemning the arrest. But to no avail. It is significant that the DMK Chief Karunanidhi welcomed the arrest!

There was one investigating Police Officer of the SP rank, the evil genius, who went after His Holiness with such vengeance, both the Trial Court that acquitted the Seer and the SC that granted bail had nothing good to say about this Officer. The Court observed that this was one Officer whose active involvement  in the case went beyond what is specified in law. Why? GoK.

However, let me conclude by reproducing a small part of what His Holiness said in an interview he gave to Outlook magazine on 6.12.2004. This was part of the testimony the Seer gave to the Police.

“To powerful Ministers and industrialists I was a ladder. Now the ladder is broken. I held the Brahmins of the country together like a sack, that sack is torn; to the Dalits I was a vessel that offered them water, that vessel is broken.”

Now RIP the Holy One.