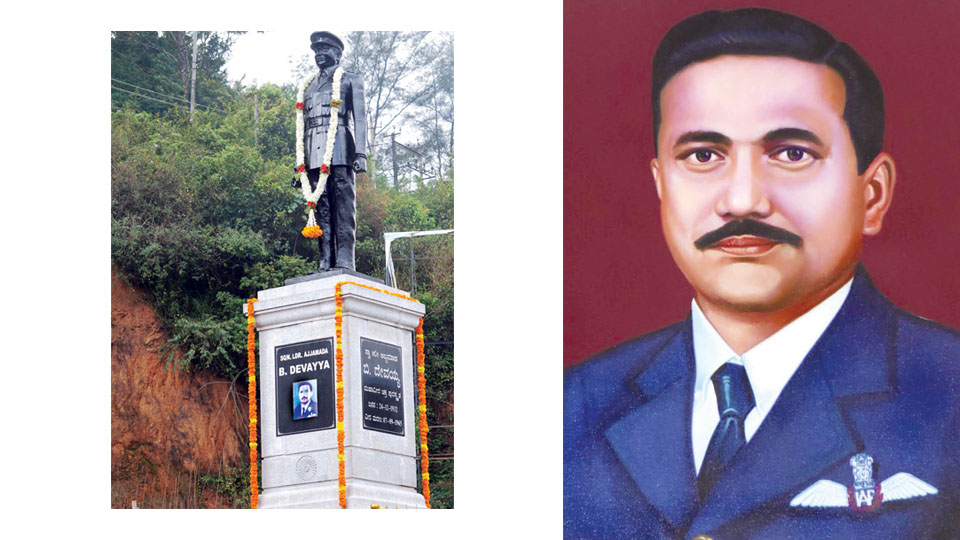 Madikeri: Madikeri, the capital of Kodagu, the land of soldiers, has a 6-feet-9-inch bronze statue of Squadron Leader Ajjamada B. Devayya that calls out each passer-by and makes him/her recall his heroic deeds during the Indo-Pak war of 1965.

Devayya was just 32 then and he dedicated his youth to the cause of his motherland. He died in an audacious air attack over Sargodha, Pakistan’s most formidable airbase.

Maha Vir Chakra (MVC) was conferred on Devayya in 1988, 23 years after his sacrifice in an epic dog fight on Sept. 7, 1965 war against Pakistan Air Force’s Supersonic F-104 Star-Fighter.

If it had not been for Pakistani Flt. Lt. Amjad Hussain’s admission whose plane was destroyed by Sq. Ldr. Devayya and the book by British writer John Fricker titled ‘Battle for Pakistan: The Air War of 1965’, the valour of Sqn. Ldr. Devayya would have gone unnoticed.

couple on Dec. 24, 1932, at Manchalli village near Kutta in South Kodagu. He joined the Indian Air Force as a pilot on Dec. 26, 1954. Devayya was married to Keethiyanda Sundari.

When the Indo-Pak war broke out in 1965, Devayya was an instructor at the Air Force Flying College. He was posted to No.1 ‘Tigers’ Squadron’ and flew the Mystere fighter bomber.

During the war, Devayya shot down a US-made PAF (Pakistan Air Force) F-104 Star-Fighter while flying an inferior Mystere. The French Dassault Mystere was no match for F-104 Star-Fighter as it was the first plane in the world which touched the Mach 2 Speed.

John Fricker wrote that on Sept. 7, 1965, Mystere pilot Squadron Leader A.B. Devayya showed commendable courage by staying in the fight, and despite being mortally wounded, he eventually scored several cannon strikes against the Star-Fighter, causing it to be abandoned.

This was the first and only Star-Fighter to be lost through enemy action in the 1965 war. Devayya was part of an air strike mission on the PAF base at Sargodha, with the objective being to neutralise its air assets.

He engaged in a dogfight with the Star-Fighter flown by Pakistani Flight Lieutenant Amjad Hussain at an altitude of 7,000 ft. The PAF fighter was faster and more modern, but Hussain made the mistake of reducing his speed in an attempt to out-turn Devayya.

Devayya turned hard and thus forced Amjad to go for a reversal and because of this, now the Star-Fighter was in Mystere’s gun sight. Devayya, despite being hit, didn’t eject and decided to give a far superior plane, a fight for its life.

Devayya opened his 30mm cannon and fired at point-blank range at F-104 and therefore damaging the aircraft. Amjad Hussain was forced to eject at a low level but Devayya was not able to eject due to its damaged Mystere and therefore the aircraft crashed.

The Mystere aircraft was destroyed and Devayya died on Pakistani soil. The action was over in less than two minutes. What Devayya achieved in the pre-dawn Pakistani skies that morning is now considered one of the most remarkable events in the history of post-world war air combat.