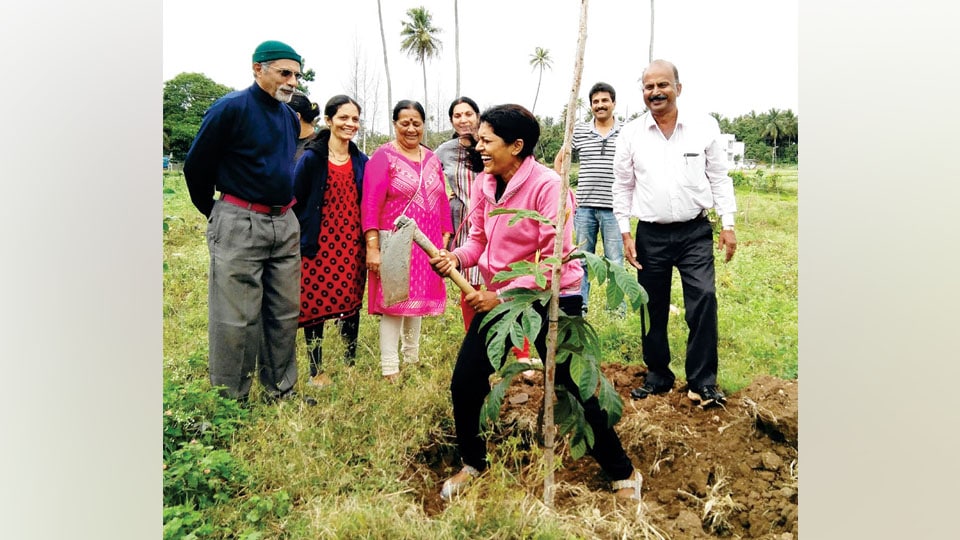 Residents urged not to plant saplings under overhead power lines

Mysuru: The newly-floated Tree Lovers Club, which planted around 700 saplings in Vijayanagar 3rd Stage last month under its urban greening initiative, continued its drive by planting over 200 fruit-bearing saplings this month also.

Addressing the residents, Subramani said that the urban greening wing of Forest Department in Mysuru would accede to the requests of any NGOs such as VeKare Ex-Servicemen Trust’s offshoot ‘Tree Lovers Club’ to plant the required species of tree saplings in any residential layouts in Mysuru, if found feasible.

He also urged the residents not to insist the Forest Department staff to plant saplings underneath the overhead electrical lines, like in some areas, since it would be hazardous after the trees grow taller. Such planting of saplings would dent the tax-payers’ money in getting the trees pruned every year by the CESC. A rare picture of tastefully pruned Honge trees underneath power lines. Dr. Mahadevaiah of Vijayanagar 3rd Stage gets these three trees pruned every two years at his own cost so that they don’t touch the wires.

Reiterating that the trees touching the power lines would also pose threat to human lives, Subramani urged the residents themselves to get such trees in their surrounding areas pruned regularly by professionals without waiting for CESC staff.

Observing that a lot of weeds, parthenium and unwanted wild grass was growing in the vacant sites, Subramani suggested the residents nearby to make use of such sites as a kitchen garden or flower garden with prior permission from site owners. This would not only give a facelift to their layout but also set a precedent for others to emulate the concept of utilising the vacant sites to grow vegetables/ flowers and to cultivate the habit of gardening.

On behalf of the residents and site owners in Wild Grass Layout, Wg. Cdr. Madappa lauded the efforts of Tree Lovers Club and said that the residents would look after the tree saplings.

K.J. Halappa said that he would send an appeal to the residents and the site owners of the Layout to donate in kind or cash towards maintaining the Park as well as to look after the saplings planted in the Park.