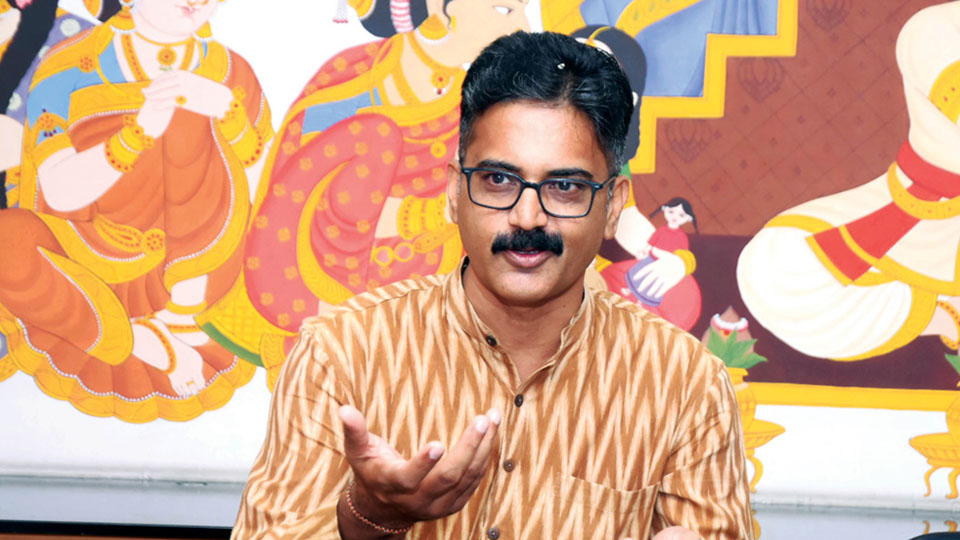 Krishna Devaraya is the 19th descendant of Anegundi Samsthanam and Vijayanagar rulers from the Aravidu dynasty. He has done enormous conservation work to ensure that future generations are made aware of royal traditions, culture and legends. One of his exemplary works was to restore the 250-year-old dilapidated Heere Deewan Mansion at Anegundi in Hospet Taluk. This Mansion has now been restored to its original splendour, thanks to his passion and firm resolve to restore heritage. Krishna Devaraya was in Mysuru recently to inaugurate the dolls exhibition organised by Ramsons Kala Pratishtana as part of Dasara festivities. Star of Mysore spoke to him about the glory of Dasara and also the importance of heritage. Excerpts:

Star of Mysore (SOM): Can you tell us about Dasara celebrations in Vijayanagar Empire? We have heard a lot about the Mahanavami Dibba. How is Dasara celebrated there now and on what scale?

Krishna Devaraya: Dasara at the Mahanavami Dibba was perhaps the grandest celebration in mediaeval India in terms of pomp and splendour. Every traveller describes it in great detail — especially about it being a grand spectacle which was unparalleled. At present, there is no public festival of Dasara at the Mahanavami Dibba. Though it is wished that the Dibba be used for its main purpose in the future — the celebration of Dasara. In Anegundi, the celebration of Dasara still continues on a very small scale.

SOM: How do you see the Dasara celebrations of the Government when compared to the grandeur, pomp and glory of the Dasara of the Kings and Queens?

Krishna Devaraya: The primary difference is the nature of the festival. The royal Dasara used to be a religious affair whereas Dasara is mostly a secular affair now with the head of the State not performing any major ritual worship of Devi. Also, earlier Dasara used to involve various games related to physical prowess — wrestling, archery, etc., and was a place for the men to display their achievements.

It has lost the ‘vira’ component almost completely now. Garadi Manes used to train wrestlers, especially for wrestling competitions during Dasara. Today, the Garadi Manes themselves are going into oblivion due to a lack of patronage. Whereas the Royal Dasara was about worship of Devi and patronage for various traditional artists, sports, etc., the Government celebration is more about a spectacle for tourist consumption.

SOM: Is there any major difference between the Dasara celebrations of Vijayanagar rulers and Mysore Wadiyars?

Krishna Devaraya: On the ritual front, they are one and the same. Dasara celebration was earlier restricted to the independent emperor in Southern India. As per shastras, worshipping Devi in this fashion in Sharad Navaratri is akin to performing an Ashvamedha yajna. The emperor used to perform the Dasara festival and his vassals would visit him to pay homage.

Also, seemollaanghana (cros-sing one’s border) to attack the enemy used to be done after Dasara celebrations. When Mysore Samsthana started their own Dasara, it was done to show that they have become independent rulers on their own after the fall of the Vijayanagar Empire. The rituals were followed rigorously. Only the scale of the celebration would be smaller as Mysore was but a fraction of the size of the erstwhile Vijayanagar Empire.

Krishna Devaraya: There are no marital relations with the Mysore family as far as I know. It is stated that the ruler of Srirangapatna was the father-in-law of Sri Krishna Raya and was given a position of pride during Dasara festivities — said so by Domingo Paes, who was a traveller from Portuguese India. But no other such relationship is mentioned after that generation.

SOM: You are the 19th descendant of Anegundi Samsthanam and Vijayanagar rulers and you have restored the Heere Deewan Mansion to its original splendour. This is a much-appreciated step at a time when of late people are forgetting their heritage. What do you have to say when it comes to preserving our heritage?

Krishna Devaraya: Firstly, heritage should not be destroyed. We have seen how the 1,000-pillared mandapa in Tirumala was destroyed by the Government in the name of development. If you cannot maintain something, at the very least, do not destroy it. Secondly, the budget allocation for the preservation of heritage in India is very low compared to the number of heritage structures we have.

The budget allocated to the Archaeological Survey of India (ASI) is less than Rs. 1,500 crore per year. The Government should allocate more funds and also have a fund for heritage conservation to which donations shall be made 100 percent exempt (for Corporate Social Responsibility as well). Traditional architects and masons are becoming very rare now due to lack of opportunities.

The Government should have programmes for enabling these artisans to continue their traditional occupations. Proper maintenance and conservation work in our temples and other heritage buildings shall ensure that they continue to have a source of income. Heritage conservation should include the conservation of these traditions and the artisan families.

SOM: In Mysuru, there are two heritage buildings — Devaraja Market and Lansdowne Building — that have been recommended to be demolished by the State Government. But the members of the Mysore royal family Pramoda Devi Wadiyar and Yaduveer Krishnadatta Chamaraja Wadiyar are in favour of restoration. Since you have the experience of restoring Heere Deewan Mansion, what would be your take on this?

Krishna Devaraya: Of course, we are not in favour of the destruction of any heritage structure. Even from an environmental point of view, they are more sustainable than modern buildings. The heritage buildings, when maintained well, survive for centuries; the so-called modern RCC buildings do not even survive for one generation (average life expectancy is more than 75 years now).

This is not sustainable development. In terms of beauty, aesthetics and environmental conservation, it is always better to preserve heritage buildings instead of replacing them with modern hideous constructions.

Krishna Devaraya: It is based on what the Government plans to do. Archaeological Department and traditional sthapatis should be involved to ensure that the heritage building is conserved properly. That should be the primary aim when it comes to such structures; everything else must be subservient to this goal.

SOM: Can you tell us about your family? The people of Mysuru would love to know.

Krishna Devaraya: I am the 19th descendant of Sri Krishna Deva Raya. I belong to the Aravidu Dynasty. I did my schooling at Sri Aurobindo International Centre of Education, Pondicherry and completed my Mechanical Engineering at Bapuji Institute of Engineering and Technology, Davanagere in 1992. I worked in the USA for almost seven years and came back to India in 2008 after the demise of my father.

My parents are late Raja Sri Achyuta Devaraya and Rajamata Smt. Chandrakantha Devi. My mother belongs to the royal family of Narasinghgarh in Madhya Pradesh. I am married to Rani Rathnasree Raya and we have three children — a son and twin daughters. My son Tirumala Venkata Devaraya is doing his final year in History at Durham University, UK. My daughters Shiva Rayakumari and Krishna Rayakumari are studying in 10th grade at Isha Home School, Coimbatore.