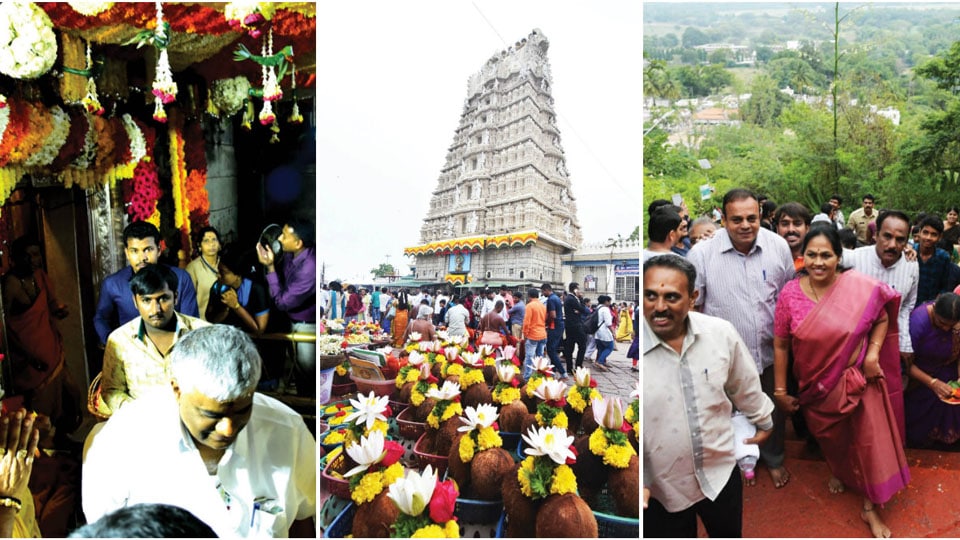 Who will Goddess Chamundeshwari Bless this Ashada Friday?

Mysuru:Even as the JD(S)-Congress Coalition Government is seeking a Vote of Confidence today in the Assembly, PWD Minister H.D. Revanna, who is also the elder brother of Chief Minister H.D. Kumaraswamy, took time from the fluid political situation in the State capital and visited Chamundeshwari Temple atop Chamundi Hill this morning to seek the blessings of the deity.

Revanna, who arrived at the temple at 8 am was inside the temple for about half-an-hour and offered prayers to the deity.

Later, speaking to media, Revanna said that he had performed special puja in the name of his younger brother Kumaraswamy, who is seeking a Trust Vote in the Assembly. Expressing confidence that the JD(S)-Congress Government will survive the Trust Vote and continue to be in power, Revanna maintained that the CM himself voluntarily sought Vote of Confidence when the monsoon Assembly session began on July 12. But as BJP members were not present then, the Trust Vote was scheduled for July 18, he said.

Claiming that the then Prime Minister Vajpayee of the BJP had sought 10 days for Vote of Confidence in late nineties, Revanna merely said that the Speaker will act as per the Constitution and directions of the Supreme Court.

Speaking to press persons, Shobha said that she has offered special prayers to the deity seeking a BJP Government in the State under B.S. Yeddyurappa’s leadership. She further said that it was shameful that the coalition Government was continuing in power despite having lost majority, with over 15 MLAs from the ruling JD(S) and Congress resigning from the Assembly.

Accusing the Coalition Government of pursuing anti-people policies, she alleged that the State Government was caring little for tackling severe drought in State.

Claiming that the JD(S)-Congress Coalition Government was collapsing on its own, with several MLAs from both the parties getting disillusioned with the style of functioning of the CM and the Government, Shobha alleged that the Assembly Speaker, instead of performing in an impartial manner, was acting like an agent of the Congress and the Government.

Referring to the MLA kidnap allegation made by the Congress yesterday, Shobha said that MLAs were not children and there was no question of kidnapping any MLA. Alleging that the Government had failed on all fronts, she said it was high time this Government was voted out in the interests of the people.

On the third Ashada Friday today, the Hill temple saw a large number of devotees thronging the temple. There was also a heavy rush at the hill footsteps.

The rituals began at 3.30am with the performance of Mahanyasa Poorvaka Abhisheka, Pushparchane, Kumkumarchane and other rituals by the temple chief priest Dr.N. Sashishekar Dikshit, Devi Prasad and other priests.

The devotees were allowed entry to the temple at 5.30am.

KSRTC is operating free buses from Lalitha Mahal helipad from 4 am to 8 pm.