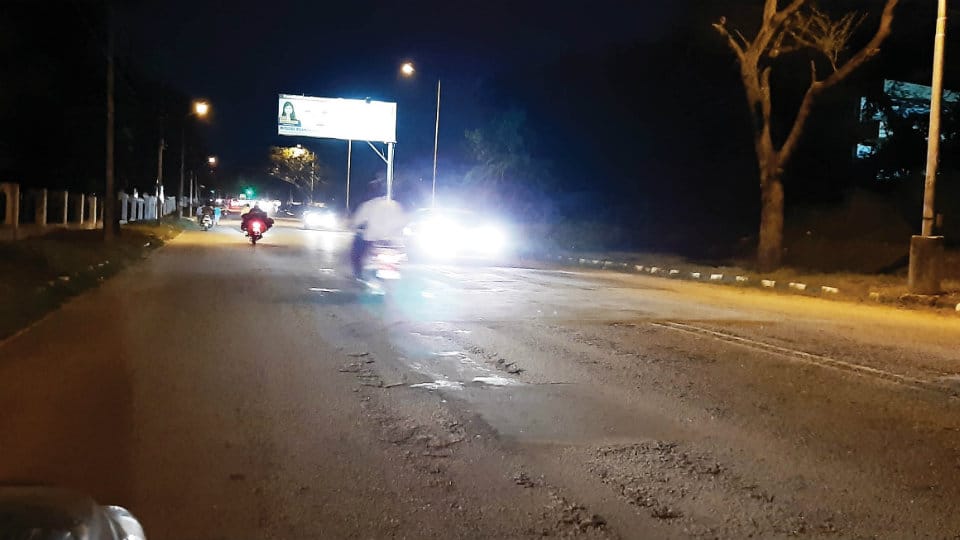 Mysuru: It is a peaceful night and you are driving down a city road amidst cool the breeze humming a tune or two. Suddenly, flashing lights of an oncoming vehicle blind you. For a moment you feel disoriented and almost lose control of your vehicle. If you are fortunate you can recover within seconds and if you are not, your vehicle crashes into a median. Or worse, a vehicle speeding behind you collides with your car. And the other vehicle that has flashed the high-beam at you drives off in the darkness.

Use of high-beam headlights has emerged as a challenge for motorists in city. Although the Motor Vehicles Act, 1988 (amended in 2011) states that headlights on vehicles should be between 35-50 watts, their misuse in the city at night has become a nuisance for motorists. Not using the dipper has compounded their woes.

This nuisance is one of the foremost issues troubling drivers at night, apart from poor streetlights and innumerable potholes. And cars, SUVs and trucks are the main high-beam culprits. The rule insisting that the top-half of the headlight must be painted black is ignored.

Apart from headlights, some vehicles have projectors and halogen bulbs and they travel menacingly, beaming all the lights.

Unfortunately, not many vehicle owners have knowledge about high-beam and low-beam headlights and they are often seen involved in verbal duel with the Police or other commuters on the use of high-beam lights.

Dharanesh, a regular commuter on the Ring Road, questions, “We are afraid to drive at nights as the high-beam lights from vehicles coming from the opposite direction impede our vision. Sometimes, it leaves us temporarily blind for a few seconds. Why are the Police not acting against such persons?”

City resident Jayanthi said that the high-beam was a menace. “High-beam is for Highways. People find stupid reasons for using it in city limits but it is a menace which needs to be curbed,” she emphasises.

Not many cases are booked for using of high-beams as no special drives are conducted by the Police. Fines are imposed on high-beam vehicles only when they are caught while the Police check for drunken driving.

Siddhartha Traffic Inspector Aruna Kumari said, “We get to impose penalties for using   high-beam headlights only at the time when we check for drunken driving.”

The Traffic Police are empowered to impose a fine of Rs. 100 on offenders under Sections 112(4) (A) and (C) and 177 of the Motor Vehicles Act. Rule 106 of the Act also states that the headlights of the car have to be constructed, fitted and maintained in a manner so that it is ‘permanently deflected downwards to such an extent that it is not capable of dazzling any person.”

The rule clearly states that vehicle owners must see to it that there shall not be any tampering with headlamps of vehicles. Use of the high-beam headlights has forced many elderly citizens to avoid driving or riding their own vehicles. Instead, they end up in shelling out money to travel in autorickshaws and cabs.