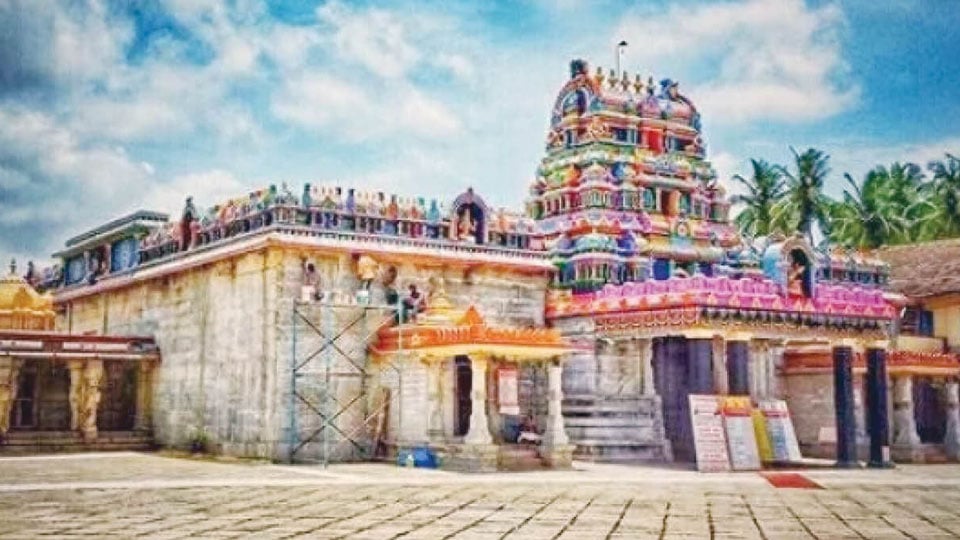 The story of Sage Rishyashringa who was born with two horns

Varuna is the God of rain. During rainy season, nature gets a new look and all water bodies flow with ample water which is necessary for survival. Hence we all pray for Rain God Varuna through Yagas, Homas and chanting special Mantras.

Some special persons have special power, which is known as ‘Siddhi’ to invoke the Rain God and his grace through sufficient rains. Life without water is impossible and hence it is named as ‘Jeevan’ in Sanskrit.

We do read about such prayers, homas and yagas being performed at many places. Recently, the Karnataka State Government ordered the Religious and Charitable Endowments Department (commonly known as Muzarai Department) to conduct Parjanya Japa during Braahmi Muhurtha at all temples within its jurisdiction on June 6.

On that day, special prayers were held at Rishyashringa Temple at Kigga in Chikkamagaluru. Located at a distance of 10 kms from Sringeri, Kigga is a beautiful village situated on the banks of Nandini River, a tributary of Tunga. Kigga is famous for Rishya Shringeshwara temple.

Dedicated to Rishyashringa, the temple stands on the site where Sage Rishyashringa was absorbed in the celestial light. Built during Vijayanagara period, the temple houses a Linga of a unique shape, with three protuberances resembling horns. There is a belief that if the Linga is properly worshipped, famine will be averted. It is said, Sage Rishyashringa’s advent ended drought in this place.

It is quite interesting to know about Rishyashringa’s life, his penance and his service through his special powers. The great sage Kashyapa had two sons namely Prabhandak and Vibhandak. Prabhandak preferred to be with his father Kashyapmuni to assist him in managing routine life. But Vibhandak wanted to gain extra knowledge and hence left home. He had inherited the philosophical approach of life from his father. He went for penance for many years where he gained knowledge along with spiritual powers. But by that time Kashyapa had died.

Due to deep penance Vibhandak could not come for the last rituals. One day he felt like going back to meet his brother Prabhandak, his elder brother. Naturally, both of them were very happy to meet each other. He was very happy to see the progress of his younger brother Vibhandak. Both the brothers were planning for the future through their knowledge for the benefit of people. But Vibhandak was treated badly at home and hence he decided to leave the place. He went to a far off place and started his second penance. Vibhandak started gaining more and more powers as a result the King of Heaven Lord Indra started feeling insecure.

With the fear of losing his seat, he selected Apsara Urvashi and ordered her to go to Vibhandak Muni on Earth. Urvashi’s job was to divert Vibhandak’s concentration and she tried all her methods to attract Vibhandak. With tremendous resistance, and control Vibhandak did not yield to Urvashi’s tricks for long but finally he failed and as a result, both of them entered into wedlock through Gandharva Vivaha system.

In due course Urvashi delivers a baby boy but the boy was not like any ordinary child — it had horns of deer on the head. As a mother, Urvashi could not tolerate this unusual form of her baby. In desperation she abandoned her child and went back to Heaven.

Vibhandak became both-father and mother to the baby. Through his knowledge he had sensed the inner qualities of his child and started taking care of the child and trained him with the knowledge he had gained through his penance. But Vibhandak had inner hatred about the entire woman race and hence he decided to keep his son away from women. He had strictly prohibited woman entering his Ashrama.

In due course, the child gained good knowledge and people started calling him ‘Rishyashringa’ because of the horns on his head. Rishyashringa was brought up in such atmosphere and developed indifferent attitude towards womenfolk.

Due to his sharp intelligence and grasping capacity, he gained knowledge of four Vedas which astonished scholars and other sages. Rishyashringa was treating everybody with honour who were visiting Vibhandak Muni’s Ashrama.  They all were pleased with his good behaviour and used to bless him while leaving.

Vibhandak Muni’s Ashrama was located on the borders of Anga Desha. We get the information about this place, as it was the Kingdom of Karna during Mahabharata period and presently it is India’s Bihar region. During the period of Rishyashringa, King Rompaad was ruling this region who was a bad ruler and people were unhappy there.

Added to bad rule, there was famine for continuous 12 years and there were no signs of rain. People became desperate and started leaving the place. King Rompaad wanted to come out of the situation but was not in a position to find a way out. At that time one sage informs him about Vibhandak Ashrama and his son with rare powers by name Rishyashringa.

The sage also tells king Rompaad that if he can invite Rishyashringa to his kingdom with proper honour then definitely the situation will improve. However, the king Rompaad was feeling guilty of his misdeeds and was scared to face Rishyashringa.

Rishyashringa was a noble soul and was far away from worldly qualities like hatred, jealousy, greed, and competition.  When king Rompaad narrated to sufferings and the continuous famine in his State Rishyashringa’s heart was filled with compassion and love for all the people and started praying for their welfare. When he started chanting prayers to invoke rain God, miraculously to the surprise of all the people the Rain God Varuna appeared in person and started raining abundantly.

The King and the people had no limits to their happiness and worshipped Rishyashringa as a superman having divine powers to bring rain and happiness. King Rompaad offers Shantha to Rishyashringa and thus the marriage is celebrated. By this time the fame of Rishyashringa spread. Rompaad was related to king Dasharath of Ayodhya.

During that period, the King Dasharath was very much unhappy as he was childless. He invited Rishyashringa to Ayodhya and requested him help him in getting heir to his kingdom. Rishyashringa accepts his invitation and performs ‘Putrakameshti Yagna’ in Ayodhya and later, Ram Lakshman, Bharat and Shatrughna were born.

Now it was time for Rishyashringa to return to his father Vibhandak Muni along with his wife Shantha. The purpose was nothing else but to serve his father during old age. But Rishyashringa comes to know that Vibhandak Muni has gone to a hill by name ‘Malahanikeshvar’ for penance. The couple decides to stay there to serve the old sage Vibhandak until end. Along with Vibhandak both Rishyashringa and Shantha meditated to gain Yogic power. After Vibhandak’s death the couple shifted to a place by name ‘Kigga’ where Rishyashringa was enlightened and at that time the mantras which came out of his mouth were very powerful.

How Sringeri was born

It is said that these mantras were included in the first Veda – Rig Veda in due course. Rishyashringa stayed for a long time on this hill and hence the hill got the name Rishyashringa Giri — Giri means hill. Many a times it is noticed that there is always a change. People adopt the names which are easy to utter. Thus in due course of time the name changed to ‘Sringagiri’ and finally it is being called ‘Sringeri’.

Shri Sharada Peetham of Sringeri is one of the four Peethas established by Adi Shankaracharya and provided the Royal status to the Peetham. It is located in Chikkamagaluru on the banks of river Tunga.