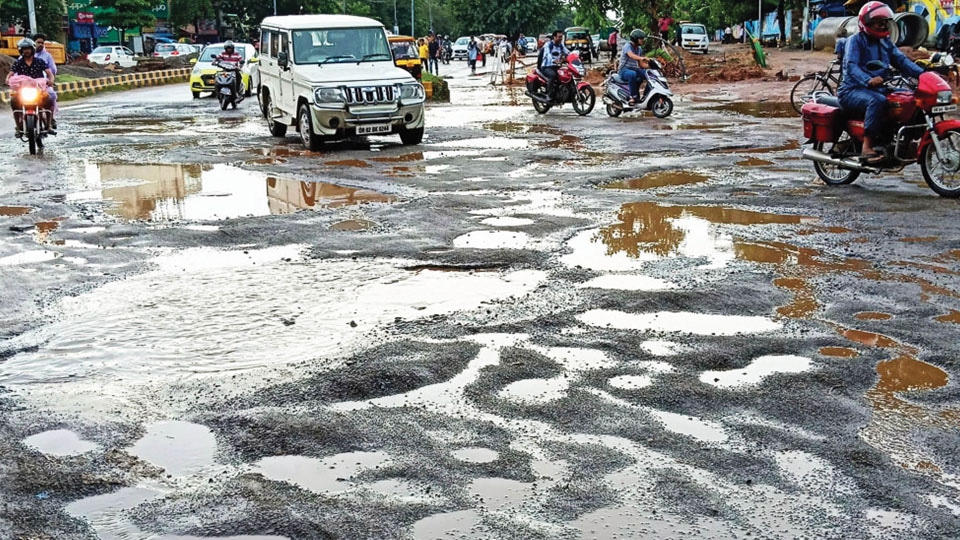 Karnataka’s Rural Development and Panchayat Raj (RDPR) Minister K.S. Eshwarappa resigned yesterday as he was named accused number one in the suicide of a civil contractor Santosh Patil.

The civil contractor had accused the Minister of harassing him for a ‘40 percent commission’ to clear payment of about Rs. 4 crore for road projects completed over a year ago.

Eshwarappa’s resignation brings forth the issue of ‘commission’ culture that plagues our system. While our Prime Minister tells us in his ‘Mann Ki Baat’, his party Ministers in Karnataka are busy with ‘Money Ki Baat.’ And when it comes to ‘Money Ki Baat’, nothing pays like construction projects, and nothing beats ‘commission’ on roads.

Our roads are NOT made for driving; they are made for earning. Roads are the perennial money-earners for politicians and their contractor friends. Roads can be asphalted often, and therein lies its perennial nature. This reminds us of the saying, “when a politician sees the light at the end of a tunnel, he calls a tender to add more tunnels.” This keeps the ‘billing’ perpetual.

Our State has spent Rs. 20,060 crore doing up roads of just Bengaluru alone in the last five years! It is mind-boggling, yet Bengaluru has the worst roads in the country. Now the CM is considering a maintenance audit to monitor road development in Bengaluru. Does this scare the road contractor lobby?

Because road contractors, especially in the States, are politically connected and are significant donors to the party’s kitty. It’s a typical case of “A Government which robs from Peter to pay Paul can always depend on the support of Paul.” And now it seems there is an imbalance and Paul, the contractor, is upset.

All these years, road contractors were fine and silent when politicians stole from the tax-payer, and they both shared our tax money earned with our blood, sweat and tears. But now contractors have a problem because THEY are being robbed?! Now they know what we tax-payers have been feeling for decades.

Where was this urge to write a letter to the PM when their fellow contractors did a shoddy job leaving potholes of death? Where was this anger when they received payment for asphalting roads that did not exist? In 2018, the Journal of Development Economics reported that almost 500 all-weather roads listed in the road programme’s monitoring data as having been completed and paid for were never actually built!

Also, in Santosh Patil’s case, the BJP is right to ask for the work order issued to Santosh? Also, Santosh had a chequered history of desperation. In October 2016, Santosh Patil forged Rahul                 Gandhi’s signature and submitted a ‘recommendation letter’ from the AICC Vice-President recommending that he be appointed the Chairman of North Western Karnataka Road Transport Corporation (NWKRTC).

Today, Congress says Santosh is a BJP worker, and BJP says he was a Congress worker. The truth is contractors are like politicians; they join the party in power to get their contracts. Period.

Interestingly, the Congress party now wants to investigate this ‘commission’ business, but do they realise they are culpable too? Did Congress not hear what Karnataka State Contractors Association President Kempanna said?

Speaking of commission menace, Kempanna said, “The contractors had to give 2 percent bribe to local leaders many decades ago. It stayed that way for a long time. Then during the Congress’ tenure between 2018-19, a Minister’s Department used to take 10 percent of the total tender cost.” So Congress is not ashamed that the bribe was increased to 10 percent during their regime; instead, Congress is just bothered about BJP increasing it to 30 percent! Oh! Lord, is there no shame.

Maybe the BJP in Karnataka needs the same threat that Nitin Gadkari gave road contractors in Delhi. He said, “It’s your job to see if construction work is good or bad. If there is any shortcoming, I will put you under a bulldozer in place of crushed stones.” But such threats don’t work. There cannot be law and order when the law-maker himself is a law-breaker.

Road contractors may now want to protest but, ironically, not against demand for bribe. They are against the increase of the bribe amount! We wish they also protest and blacklist their colleagues who take money from the Government, pay off Ministers, take the tax-payers’ money and never build a road. This reminds me of the difference between corruption in Western nations and India.

READ ALSO  Give NCC a try

Once, an Indian Minister went to the United States on a study tour. There he met a US Senator who invited the Indian Minister for lunch at his home. The Indian Minister accepted, and when he landed at the Senator’s house, he was amazed, for it was not just a house but a massive mansion located beside a river.

The Indian Minister asked the Senator, “Senator, you are a public representative in a democratic nation, are you not?” The Senator replied, “Yes, indeed I am”. Then the Minister asked, “Then how in the world could you afford to build such a big mansion?”

Then, a few years later, the American Senator came to India, and our Minister invited the Senator to his home. The Senator accepted and when he landed in our Minister’s home, he was shocked. He asked the Minister, “You are a public representative in a poor democratic nation, are you not?” Our Minister said, “Oh! Yes, of course, I am a humble servant of the people of India, Senatorji”.

Then the Senator asked, “India is a third world country, is it not?” “Oh! Sadly it is, Senatorji,” said the Minister. The Senator then asked, “So how in the world did you build this grand Palace?”

The Indian Minister then took the Senator by the elbow, walked him to a window at the end of the palatial corridor, and said, “Do you see the bridge across the river there?” The Senator said, “What bridge?! There is no bridge across that river.” To which our Minister gave a devious wink and said, “Well, that non-existent bridge built this Palace of mine.”

Our leaders and contractors don’t even do the work but take the money.