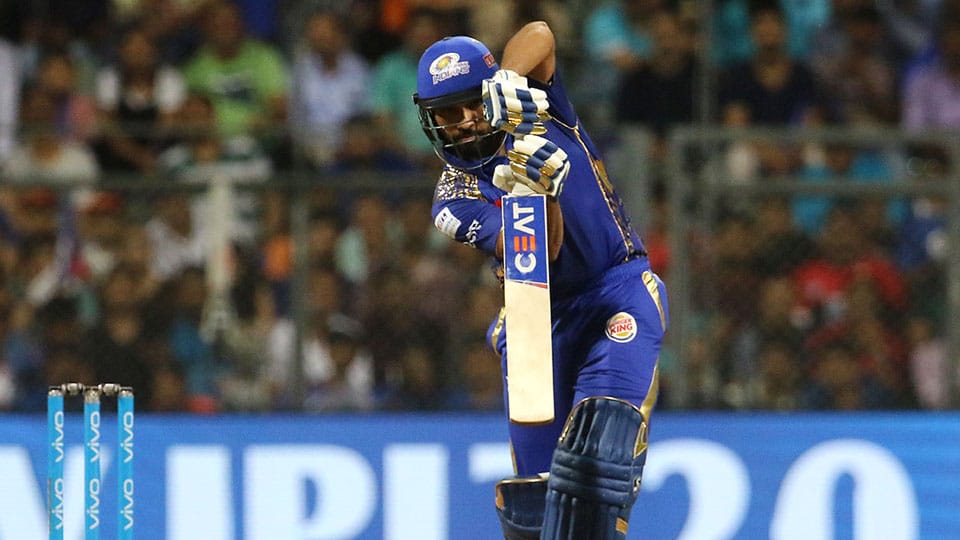 Mumbai: Virat Kohli’s 92 not out, went in vain as Rohit Sharma’s 94 helped Mumbai Indians beat Royal Challengers Bangalore to register their first win of the ongoing edition of the Indian Premier League (IPL) at the Wankhede Stadium in Mumbai yesterday.

With this 46-run win, the defending champions have opened their account in the league while as for the losing skipper Kohli, he is now the proud owner of the orange cap. Also, during the course of his stunning innings, he surpassed Suresh Raina as the highest run-getter in the history of the league.

Chasing a mammoth target of 214, Bangalore got off to the best start possible with skipper Kohli and Quinton de Kock taking the attack to the Mumbai bowlers. The duo put on a stunning 40-run partnership for the opening wicket to give the away side an ideal start. However, it all changed in the fifth over of the innings when Mitchell McClenaghan came into the attack and got rid of de Kock and AB De Villiers in a span of four deliveries.

Mandeep Singh tried to put on a partnership with Kohli but was stumped off the bowling of Krunal Pandya. Corey Anderson was the next to head back into the hut as he became Krunal’s second scalp of the day on the next delivery for 0.

Washington Sundar became Krunal’s third scalp of the day, who finished with excellent figures of 3/28 in four overs. Kohli continued to wage a lone battle on the other end and notched up his second fifty of the season.

Sarfaraz Khan was also stumped off the bowling off Mayank Markande in trying to hit a big one. Chris Woakes joined Kohli in the middle and the duo hit a few out of the park to provide some respectability to the RCB score.

Bumrah then picked up the wicket of Woakes and Umesh Yadav in one over to further peg back the away side. Kohli hit a few big ones right at the end to finish the innings at 92* but his effort went in vain as Bangalore fell short by a big margin runs.

Earlier, half-centuries from Rohit and Evin Lewis propelled Mumbai to 213/6 in their designated 20 overs. But it didn’t start well for the home side as Umesh castled Surya Kumar Yadav and Ishan Kishan on the first two deliveries of the match, respectively.

Rohit then joined Lewis in the first over of the innings itself and the duo issued a stunning fightback. Both Lewis and Rohit upped the ante and took the attack to the Bangalore bowled after getting themselves in.

Lewis was the first to complete his fifty as it was raining fours and sixes at the venue. But the 108-run partnership was finally ended when Anderson got the prized wicket of Lewis for 65.

Following the dismissal of the star West Indian, Rohit upped gears in stunning fashion and notched up his fifty in no time. And from there on it was complete carnage as Rohit was finally dismissed for 94 in the last over of the innings, not before slamming 10 fours and 5 sixes in another of his marvellous innings in this edition of the IPL.

Rohit Sharma was adjudged as the ‘Man of the Match.’