Home » News » Royal Cemetery at Madhuvana to get facelift 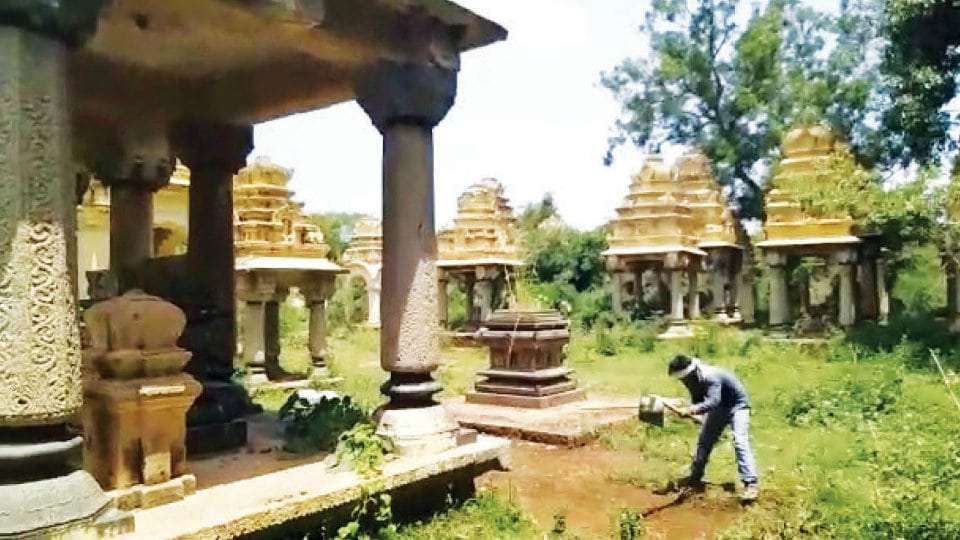 Royal Cemetery at Madhuvana to get facelift

Mysuru: The resting place of the rulers of the erstwhile Wadiyar dynasty at Madhuvana on Nanjangud Road has always been an abode which has aroused the curiosity of the citizens, as it has a rich history.

To spruce up the 12-acre Madhuvana, which is overgrown with weeds and bushes, the HH Srikantadatta Narasimharaja Wadiyar (SDNRW) Foundation headed by Pramoda Devi Wadiyar, has taken up the cleaning of the place as part of its many projects to restore the heritage structures, including Sri Jayachamaraja Art Gallery.

A source in the Foundation speaking to Star of Mysore said that the Brindavans in Madhuvana always is cleaned and painted once in two years and there is a person stationed there to clean the temples and the cemetery.

The Tourism Department had many times in the past offered to maintain the site as a tourist spot, but the royal family was reluctant to hand over the same as it had always plans of maintaining it and throwing it open to public.  The Foundation has plans to see that in future tourists will be allowed to view the many Brindavans of the rulers, said the source.

R. Rajachandra, an authority on Wadiyars and son-in-law of the last ruler Sri Jayachamaraja Wadiyar, speaking to Star of Mysore here this morning said that Madhuvana has a rich history as it dates back to the 18th century where many rulers of the royal family have been interred.

“One of the first to be cremated is Lakshmammanni, the third wife of Immadi Krishnaraja Wadiyar who adopted Mummadi Krishanraja Wadiyar. Then it was the latter who passed away in 1868 who was cremated there. Interestingly, Chamaraja Wadiyar X who was adopted by Mummadi, died in Calcutta and his Brindavan is there in Kali Ghat, which is maintained beautifully by the Kolkata Municipal Corporation to this day,” he said.

One of the main reasons why the private resting place of the royal family has been lying in neglect is due to the Hindu traditions that need to be followed. If a son whose parents are alive has to take part in the cremation then he cannot as he is not allowed to enter the place. Similarly, no woman from the royal family can enter the cremation ground. Even the construction of Brindavan is an adoption of the cross-culture which is an influence from the Islam and Christian tradition, said Rajachandra.

The cemetery has three temples — Kashi Vishwanatha, Ganapathy and Kalamma temples and the idols are still being worshipped keeping in line with the tradition.