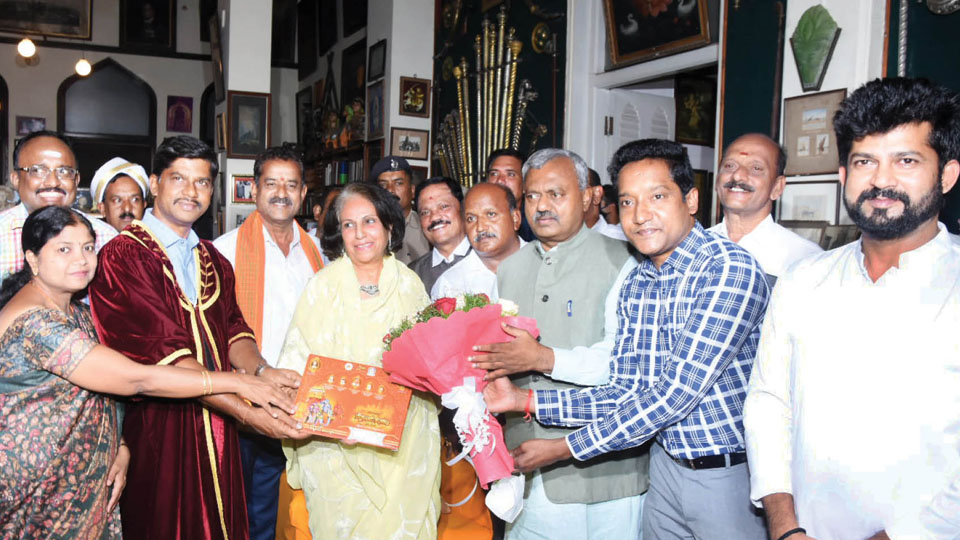 Mysore/Mysuru: Two days ahead of the commencement of Dasara festivities (Sept. 26), the District Administration on Saturday officially extended the invitation to erstwhile Royal family members at the city Palace.

A delegation led by District Minister S.T. Somashekar called on Pramoda Devi Wadiyar at her private residence in the Palace and formally invited her for Dasara festivities by presenting a bouquet and Phalatamboola and honouring her, in keeping with the past tradition. The Minister also handed over the Government Honorarium to her.

Later speaking to press persons, Somashekar said that this is his third Dasara as the Mysuru District in-Charge Minister.

Pointing out that the erstwhile Royal family has been officially invited for Dasara festivities, he said that Pramoda Devi Wadiyar has assured of full co-operation for Dasara.

Noting that preparations are in full swing for Dasara, he said that the official and non-official members of all Dasara Sub-Committees are working  in tandem to ensure the success of Dasara, which is being held in a grand manner this year after two years of COVID pandemic.

Speaking about the President’s visit for Dasara inauguration on Sept. 26, Somashekar said that President Droupadi Murmu will inaugurate the Dasara festivities atop Chamundi Hill between 9.45 am and 10.05 am. Only 13 persons will be allowed  on the dais during the stage programme, who include the President of India, Karnataka Governor, the Chief Minister, six Union Ministers and four State Ministers.

When asked about the absence of KR MLA S.A. Ramdas in Dasara related programmes, Somashekar said that Ramdas is busy with his ‘Modi Yug Utsav’ programme, in which one Minister is taking part every day of the nine-day event, which concludes on Sunday.

The MLA will take part in the Dasara inauguration and the subsequent programmes, he maintained.