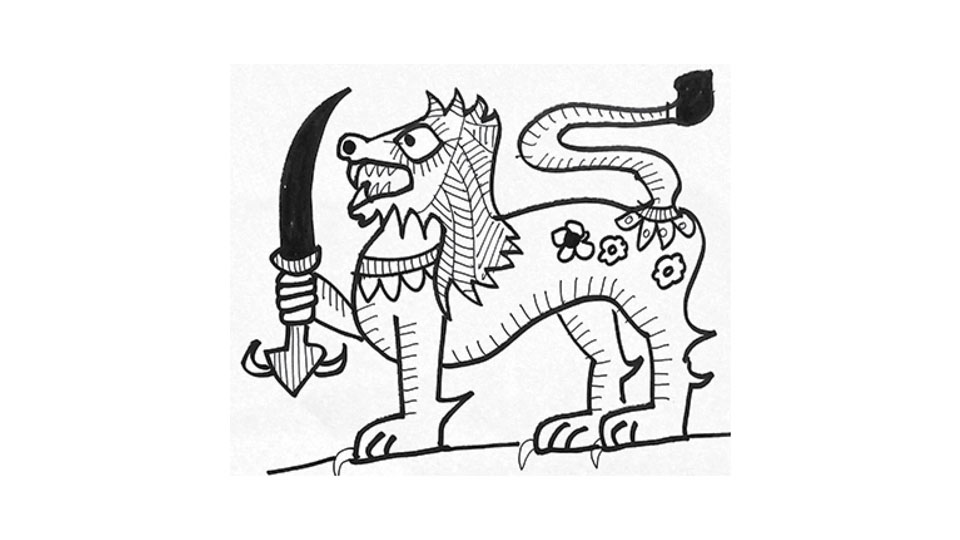 Royal Power of the Symbolic Lion

Kings across East Asia, whether it’s China, Japan, Thailand, Vietnam, Indonesia consider the lion as the symbol of kings. In front of Chinese Palaces, there is the male and female lion, the male holding under his paw a globe representing the world while the female holds a lion cub under her paws. What is interesting is that lions do not exist in East Asia — they never have. And yet, the lion is an important and integral part of East Asian visual culture. The city of Singapore means the city of the lion, but there were never any lions in the region of Singapore. The same applies to Sri Lanka whose national symbol is the lion. Their king came from India and he was the son of a lion. This could mean the spread of the Narasimha cult that once thrived on the eastern coast of India in Kalinga and Andhra.

But were there lions in India then? Some scientists say that some Asiatic lions did roam once in the dry jungles of Gujarat, Malwa and Deccan regions. This is why in India the lion became the symbol of the king. Kings sit on the lion throne — Singhasan. Across India, Rajput, Sikh and other martial communities identify themselves with the lion with names like Singh and Simha. Goddess of kings, Durga, is visualised riding a lion. It is the symbol of Buddha and Jain Tirthankara Mahavira, as well as King Ashoka. In temples we find images of lions dominating elephants. We are therefore culturally conditioned to be convinced that the Asiatic lions once roamed across India but are now restricted to Gir. However, there are animal experts and historians who argue rather convincingly that lions are not native to India. They were probably imported by Indian kings for their hunting grounds and zoos, as in East Asia, to demonstrate royal power.

Prehistoric art in caves does not display any lions. There are tigers on Harappan seals, even half-tiger Goddesses, but no lions. Lions are mentioned in the Rigveda. But Rigveda is composed by the Aryas which travelled into India with horses from beyond the Hindukush, 3,500 years ago. On the western side of the Hindukush, lions thrived. Persian kings are shown hunting lions, 2,500 years ago. Before that heroes of Mesopotamia were shown wrestling lions over 4,500 years ago. Images of lions are found in Egypt, too. In all these artworks, conquering the lion was an indicator of kingship. Egyptian and Middle Eastern kings fought lions that were native to their lands. Lion hunts demonstrated royal power, triumph over the apex predator. This idea and image spread across the world and the lion became the symbol of kings.

In Indian folklore, the tiger remains the dominant cat, the mount of many Goddesses and Saints. The word ‘Sinha’ could have been used generically for all wild cats — from leopards, to lions to tigers. This is similar to the word ‘Mriga’ that is used for all kinds of deers and antelopes and hooved wild animals. This means Narasimha could also mean just half-cat, not simply half-lion, similar to Purusha-mriga, a mythical man with hooves for feet. But the suggestion that lions are not native to India upsets many people who love the idea of being the alpha predator of the forest. Incidentally, this is true of Europe also. No lions in Europe in recent history, but lions are part of many royal heralds.