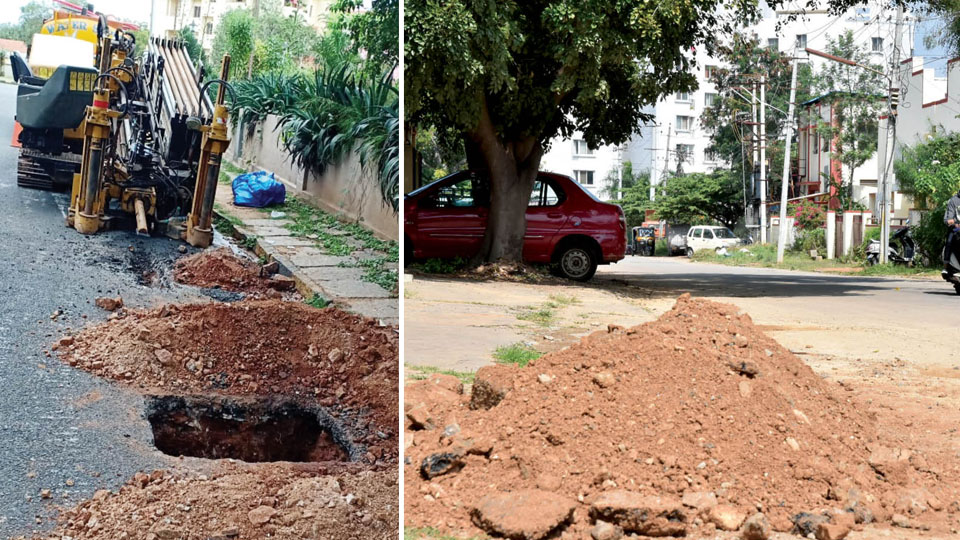 Fine amount is a pittance for the inconvenience caused, say road users

Mysuru: The shoddy Optical Fibre Cables (OFC) laying work across the city has finally gained the attention of the Mysuru City Corporation (MCC) that has now slapped a fine of Rs.10,000 each for 11 roads where the OFC pits are not closed properly.

The fines have been slapped on the agencies attached to Reliance Jio Infocomm Ltd. (RJIL), a private telecom company, that are using Horizontal Directional Drilling Method to lay cables where one to two foot square pits are dug.

Following a series of reports published in Star of Mysore, the MCC has woken up and imposed a fine of Rs.10,000 per road. That means, the agencies will have to pay a fine of Rs.1.10 lakh for 11 roads. In all, 174.63 kilometres are being dug within the city limits to lay the cables. The company has paid over Rs.17 crore to the MCC as digging fees.

Pits left after filling it with mud

As per the work order issued by the MCC, after digging, the roads must be re-laid and brought back to its original shape using jelly stones and asphalt. But the agencies are not following the norms and are not filling up the holes with asphalt and jelly stones. They are just leaving the pits after closing it with mud.

Two and four-wheelers are at danger of either damaging the vehicle tyre suspension or colliding with the oncoming vehicles. Following the mess, MCC Commissioner Gurudatta Hegde, who found lapses on the part of the company during a recent inspection, decided to levy a fine.

“The fine has been imposed for damaging the well-maintained roads and causing financial loss to the City Corporation,” states a press release from  the Commissioner.

The works can be continued only on shoulders and footpaths after taking permission from respective Zonal Development Officers. The Commissioner has pointed that the fine collected in the form of challan should be deposited in the account of respective Zonal Offices and action should be taken to restore damaged roads, stated   the press release.

Roads dug up instead of shoulders

As per the norms laid down by the MCC, the telecom company and its agencies should have taken permission to cut the roads from the respective Zonal Development Officers or the Zonal Office three days in advance.

Along with this, the works should be taken up only on road shoulders. However, the works have been carried out on the roads and most of the newly laid roads have been dug up and after digging, the agencies have not bothered to bring back the roads into its original shape.

The communication boxes are supposed to be installed in a distance of 150 metres according to the condition agreed upon. However, the boxes were installed within 90 metres, in violation of the norms, said the release.

The order to pay the fine has been issued to the Manager of RJIL.

Residents and road users are furious with the MCC move to fine a pittance to the telecom company for causing the mess.

“Rs. 10,000 per road is too less and the company can get away by paying Rs.1.10 lakh for 11 roads. This is peanuts. Actually, the MCC should have fined Rs.10,000 per pit and at the same time made the company to restore the dug up portion,” said Radhakrishna, a resident of Yadavagiri. Only when hefty fines are imposed, companies will learn and rectify their mistakes, he added.

For the record, the MCC has mentioned in the work order that the cable laying company is liable to pay Rs.688 per metre with an additional cost of Rs.200 if the roads are not brought back to the original shape and if there is a loss of public property.

road damages Rs.1.10 lakh fine Telecom firm
42 Lakes in Mysuru on the verge of depletion
Living in a Toilet !