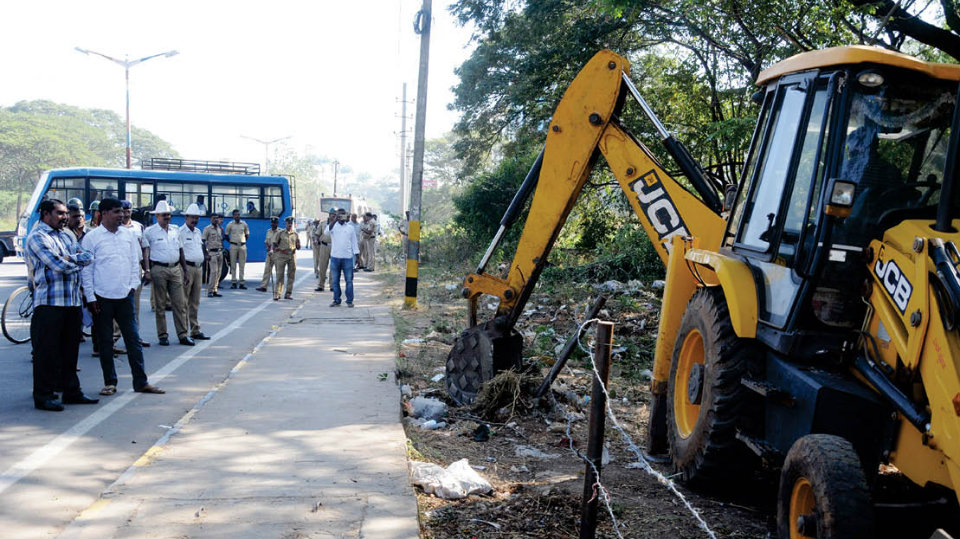 Mysuru: The District Administration seems to be on an encroachment-clearance drive as of late officials have been actively recovering Government properties in city worth crores of rupees. In a third such drive in a month or so, this morning, officials recovered Government property worth more than Rs.150 crore.

It may be recalled here that on Dec.24, 2018, illegal fencing and encroaching of Government land around the Lalitha Mahal Helipad was cleared and the entire property was recovered. On Jan.2, Government property worth Rs.17 crore was recovered at Survey Number 84, Kyathamaranahalli-Rajiv Nagar Nimra Masjid Road.

The 11-acre-38-guntas land is located between Mall of Mysore and the M.G. Road Vegetable Market. It is a Government land (Doddakere) and a few persons belonging to Doddakere Tank Bund Road Owners Welfare Association had allegedly encroached upon the land that is  worth more than Rs.150 crore in the present market.

Speaking to reporters, Tahsildar T. Ramesh Babu, who led the clearance operation, said that the Welfare Association had claimed the ownership over the land as they have purchased the same.

“The Association does not have any documents to prove the ownership but managed to get the Khata of the land issued to its name by Mysuru City Corporation (MCC). The MCC officials erred in issuing the Khata in the year 2000,” the Tahsildar said.

MUDA approval: “After procuring Khata from the MCC, the Welfare Association approached MUDA in 2004 for layout plan and sought its approval. Surprisingly, in 2005, MUDA too sanctioned and approved the layout plan to build over 70 houses. When the public raised objections that it was a government land and how a layout can be built there, MUDA wrote to the then Assistant Commissioner (AC) about the issue,” Tahsildar Ramesh Babu said.

READ ALSO  Helipad Locked ! Where will the VIPs land now ?

The Tahsildar said that when the then AC probed records, it was found the land was a part of Doddakere and is a government land or lake land. “Following the AC’s report, MUDA cancelled the layout plan and declared the area as government-owned and asked the Tank Bund Welfare Association not to go ahead with layout plan,” he said.

‘High Court misled’: The Association, comprising over 70 persons, approached Karnataka High Court where MUDA lost the case. The High Court, however, asked MUDA to probe if it was really a government land and take the case forward. “The Writ Petition is still pending in Court and following Supreme Court direction that all encroachments on lakes must be cleared, Mysuru Deputy Commissioner has ordered eviction,” Tahsildar said.

Association denies charges: The Association, however, has refuted the charges. Chartered Accountant Achyuta, speaking to reporters this morning, said that they have all the documents to prove that the land belongs to the Association.

“Just because the land is worth more than Rs. 150 crore, the officials are behind us. They have allowed all sorts of encroachment of lakes including the Doddakere Maidan that was once a lake where the Dasara Exhibition takes place. We will fight the case in Court and give officials a befitting reply,” he said.