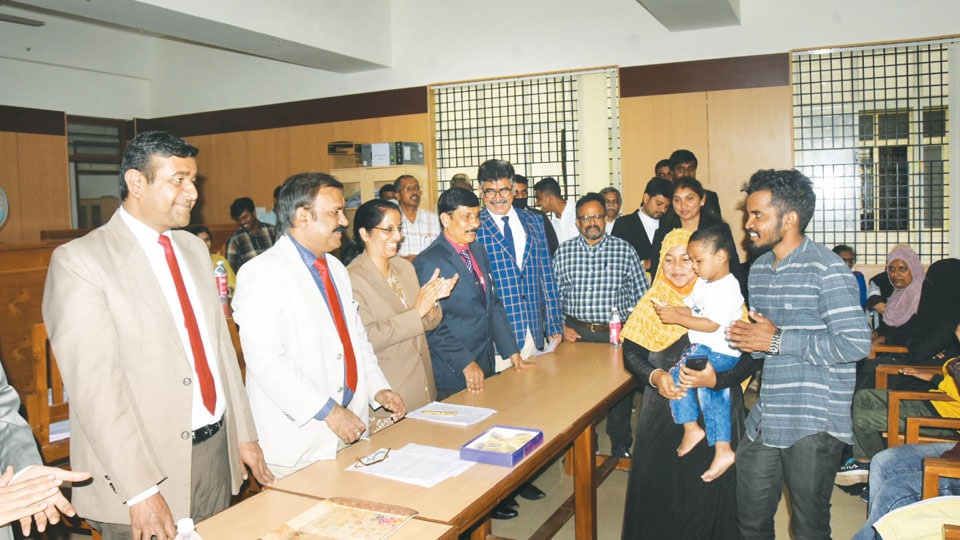 Mysore/Mysuru: The National Lok Adalat, the second one this year, held yesterday at the City Court complexes, saw settlement of 75,562 cases, including 37,177 pre-litigation cases. The Adalat also saw a collection of a whopping Rs. 47 lakh  as fine from a total of 6,888 traffic offenders in Mysuru  who had violated traffic rules and regulations.

Announcing this at a press meet at  Malalavadi Court complex in Jayanagar here yesterday, Principal District and Sessions Court Judge M.L. Raghunath, who also heads the District Legal Services Authority (DLSA), said that the Lok Adalat, which is an alternative dispute redressal system,  has brought satisfaction in terms of the number of cases settled through mutual agreement among the litigants.

The Lok Adalat also saw a rare case of differences between a girl and her father. The girl’s father is in the Defence services at Delhi and after the death of her mother, she was left in charge of her grandmother. But the girl approached the Court claiming that her father was not taking proper care of her. The Court held a video conference with the parties involved and amicably resolved the issue.

Mysore Bar Association President Mahadevaswamy and other office-bearers were present at the press meet.

The last Lok Adalat held in March this year, saw settlement or resolution of nearly 55,000 cases, while about 45,000 cases were settled in an earlier drive held late last year.

As many as 38 couples, who had sought to end their marriages, were reunited by DLSA during the Lok Adalat on Saturday. The estranged couples were convinced by the Judicial officers with support of the advocates to end their differences and start a new life. Following counselling and mediation, the couples agreed to live together again for the sake of their children, by forgetting their past differences.

Senior Civil Judge and DLSA Member-Secretary Devaraj Bhute said that the DLSA took up a large number of traffic offence cases. He announced that in all, 6,888 cases pertaining to various traffic offences have been settled with the collection of a collective fine of Rs. 47,86,100 in the last three days alone.

Replying to a question on how multiple traffic offences have bundled up resulting in steep fines, Judge Bhute said that it is a decision to be taken up at the Government level. The local Police or the Courts do not have any discretionary powers to reduce it, he clarified. In case the Government takes a decision, the Courts could perhaps think of reducing the fine depending upon the quantum slapped on the offender, he added.