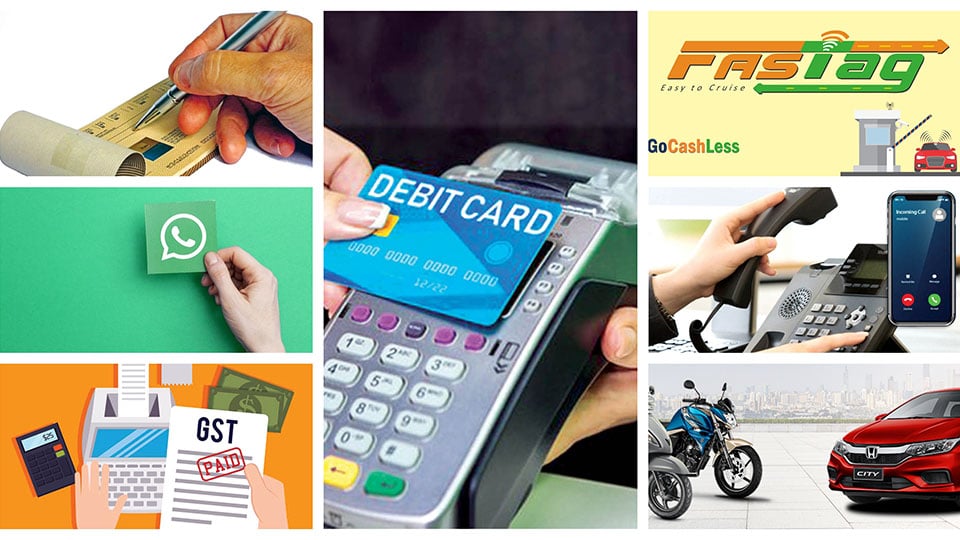 From Jan.1, 2021, many rules are going to change, that includes implementation of Positive Pay system to curb cheque frauds, mandatory FASTags for all four-wheelers across India and new mode of GST return filing facility for small businesses. So, before the new rules roll out, here is a lowdown on the new rules / systems:

FASTag mandatory for all 4-wheelers

The Union Ministry of Road Transport and Highways has issued a notification making a FASTag mandatory for all four-wheel vehicles from January 1, 2021. FASTag will be compulsory for four-wheelers or M&N category of vehicles that were sold before Dec., 2017.(Category M: Vehicles carrying passengers. Category N: vehicles carrying goods.) For this, the Central Motor Vehicles Rules, 1989 were amended. Fitness Certificate (FC) will be renewed only if the vehicle has FASTag.

FASTag is mandatory while getting a new 3rd Party Insurance through an amendment in FORM 51 (certificate of insurance), wherein the details of FASTag ID shall be captured. This shall be applicable from April 1, 2021.

The Reserve Bank of India (RBI) has decided to introduce the Positive Pay system for cheques from Jan. 1 2021. Under the new rule re-confirmation of key details may be needed for payments beyond Rs. 50,000.

The concept of Positive Pay involves a process of reconfirming key details of large-value cheques. Under this process, the issuer of the cheque submits electronically, through channels like SMS, mobile app, Internet banking and ATM, certain minimum details of that cheque (like date, name of the beneficiary, or payee and amount) to the drawee bank, details of which are cross-checked with the presented cheque by Cheque Truncation System (CTS).

The Reserve Bank of India (RBI) has enhanced limits for contactless card payments from Rs. 2,000 to Rs. 5,000. This will be effective from Jan.1 2021 and will be at the discretion of the user. The same has been done for e-mandates for recurring transactions through cards and the Unified Payment Interface (UPI).

NO NEED OF PIN

Contactless card transactions and e-mandates on cards (and UPI) for recurring transactions have enhanced customer convenience, in general, while benefiting from increased use of technology. These are also well-suited to make payments in a safe and secure manner. Contactless card payments are done without punching in the PIN, which makes it a safe mode of transaction in the current circumstances.

READ ALSO  GST confusion in Mysuru: While some conduct business with GST, others do business as usual

Starting January 2021, 92 percent of taxpayers under the Goods and Services Tax (GST) regime with an annual turnover of up to  Rs. 5 crore can opt to file their returns once a quarter instead of the present monthly system. As many as 94 lakh registered GST taxpayers can opt in for the new Quarterly filing of Return with Monthly Payment (QRMP) Scheme, under which GSTR-3B returns can be filed just once a quarter.

The scheme provides flexibility to small and medium enterprises in GST compliance norms.  While the move is expected to ease the compliance burden on indirect taxes for businesses, the Centre is also hoping to plug leakages and frauds by tightening the grant of input tax credits.

WhatsApp will only be compatible with phones running Android 4.0.3 operating system or newer as well as iPhones running on iOS 9 and newer. For Android phones, models including HTC Desire, LG Optimus Black, Motorola Droid Razr or even the Samsung Galaxy S2 will no longer be able to have WhatsApp.

WATCH OUT FOR THESE MODELS

For iPhones, iPhone 4 and earlier models will not support WhatsApp soon. Models 4S, 5, 5S, 5C, 6 and 6S will need to update their operating system to iOS 9 or later to continue using WhatsApp. In case of the 6S, 6S Plus and the first generation iPhone SE, they are the last to support the latest version of the newly released iOS 14. The app will run for select phones with KaiOS 2.5.1 OS or newer, including JioPhone and JioPhone 2.

What is your current OS version?

In order to find out your current operating system for phone, iPhone users can go to Settings > General >About, to find out the iOS version.For Android users, you can go to Settings and then on About Phone (which is probably at the end of the section) to see which Android version your smartphone is running on.

All landline users will have to dial ‘0′ before making calls to mobile phone numbers. All telecom providers have been intimated of this change and are given the deadline of Jan. 1 to take all the necessary steps.

NO CHANGE IN MOBILE TO FIXED

There will be no change in dialling plan from fixed to fixed, mobile to fixed and mobile to mobile calls. All fixed line subscribers will be provided with ‘0’ dialling facility and that it expects to generate a total of approximately 2,539 million numbering series. This will free up sufficient numbering resources for future use. The freeing up of sufficient numbering resources will add more number of connections in the future and be beneficial to the mobile customers at large.

Automakers are preparing to enter 2021 with a revised price list. India’s biggest car maker Maruti Suzuki will increase prices of its models starting Jan. 1.  The hike shall be more substantial in the light of pandemic. MG Motor has announced that it will be increasing the prices of its offerings in India. The company has claimed that they will be increasing the cost by up to three per cent in order to counter the impact of higher input cost. Hyundai stated that its entire range will go through the price revision due to rise in input and material costs.

Kia will hike prices for the Seltos and Sonet model and this “upward price correction” has been conveyed to its dealers. Renault India is the latest automobile manufacturer which has announced that it will be increasing the prices of all its cars in India. The company confirmed that car prices will be increased by up to Rs. 28,000 from January. Two-wheeler company Hero MotoCorp also announced that it will increase the prices of its vehicles by up to Rs. 1,500 from Jan. 1, 2021 to offset the impact of rising input costs.