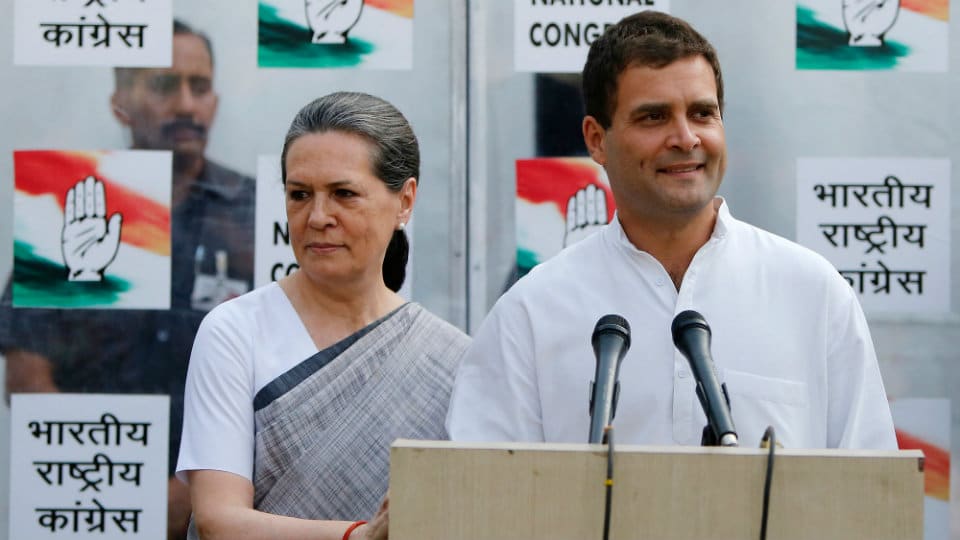 Decline & fall of the Congress. Again

Kapil Sibal, distinguished legal luminary who is also an ardent Congressman, said recently: “People don’t see Congress as an alternative to the existing Government. We lost all by-elections in Gujarat. In some UP Constituencies, Congress candidates got less than 2 percent votes. Three candidates in Gujarat lost their deposits.” He must have added more sorrowful tales to his list after last week’s local elections in Kerala. The ruling Communist-led coalition reduced the Congress-led group to a poor also-ran.

That the BJP was trampled mercilessly on the tracks was their only consolation. This should be an eye-opener to the Congress leadership because Kerala is the only State where the party has some locus standi.

At the national-level, the party has been continuing to give the impression that it has only a part-time leadership. Rahul Gandhi’s handling of his role in the party has been eccentric. For all practical purposes, he was the Congress Chief although he resigned the Presidentship in 2019, two years after he was elected. He continued his habit of going on picnic at critical junctures.

Driven to the wall, 23 well- known leaders of the Congress wrote  a letter to the High Command seeking a full-time President. What a pathetic situation for the Great Congress to be in. The High Command remained too high to bother. One of the 23 said after the party’s dismal performance in the recent Bihar elections: “There was no review of the electoral defeat in 2014, none in 2019 and none after all the other elections we have lost. Why should anything be different this time around?”

Of course, everybody knows that it is the Gandhi family’s unquestionable status that keeps the Congress immobile and ineffective. Even the Group of 23, all of them seniors, found it proper to say that they were not questioning the legitimacy of the Gandhi family’s right to leadership. What legitimacy? The whole point is that it is the presumed legitimacy of that presumed right that is at the root of the problem. It is that “legitimacy” that makes the Congress a family preservative of the Gandhis and thereby render it unacceptable to the people as an alternative.

Why were the Senior 23 afraid to tell the truth — that pushing the Gandhi family name to gain legitimacy and votes is a bad idea? Why don’t they confront the point raised by Kapil Sibal and ask why the Congress is not seen as an alternative Government? If they do, they will see that Sonia Gandhi’s political inexperience and Rahul Gandhi’s political naivety have something to do with the Congress being not an alternative.

Actually it is Rahul Gandhi who must bear the burden of guilt in this unhappy episode. His name is the problem. People think that a man named Gandhi has responsibilities that others do not have. This is an unfortunate assumption. But it is part of our historical inheritance. That Rahul Gandhi understands the naturalness of the assumption is clear from his continuous presence on the frontline of politics. His tragedy — and India’s — is that he is never taken seriously enough. He does not command the weight of Indira Gandhi or even Rajiv Gandhi. That he is seen as a lightweight is bad not just for him. It is bad for India, too.

READ ALSO  Too many vip deaths. Something amiss ?

But he is Gandhi. Gandhis command the Congress. This Gandhi was on picnic when elections were taking place in Gujarat. That did not diminish his status because he was Gandhi. The story of non-Gandhis in the Congress is almost forgotten. Sitaram Kesari, President of the Congress before Sonia Gandhi, was dethroned in a publicly humiliating style as Sonia Gandhi took his place. P.V. Narasimha Rao, another President of the Congress, was pushed out without grace; his dead body was not even allowed inside the party headquarters for people to pay respects.

The Congress led by Jawaharlal Nehru was qualitatively different from the Congress led by his daughter Indira Gandhi. The legitimacy of the Congress as a movement that represented the people of India was lost under Indira. It became, instead, a political party with narrow, personality-based, political objectives in mind. The power of Indira’s personality gave it some weight. With that gone, the Congress turned uninspiring, to say the least. Rahul Gandhi’s ways are too aberrant to change that reality. Congress suffered also as a consequence of the aggressiveness of the ideologically driven Hindutva lobby. The resoluteness of the BJP made up for the narrowness of its doctrine. Congress was the main sufferer in the process.  Unfortunate but true.

Point of View T.J.S. George
Why was Uttanahalli Road named after H.R. Venkatasubba Rao?
Rules Changing from Jan. 1, 2021: All you need to know

3 COMMENTS ON THIS POST To “Decline & fall of the Congress. Again”