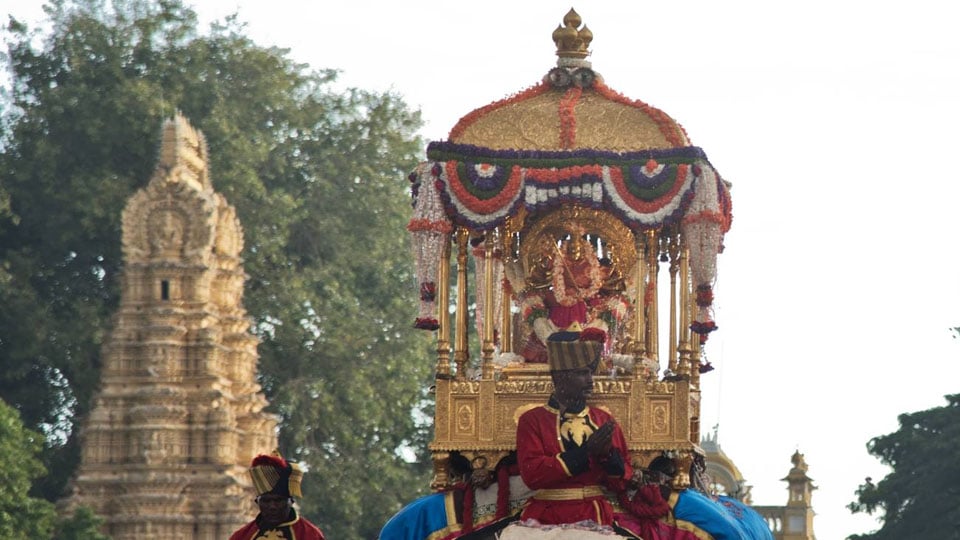 Mysuru: The Dasara pageant in the city every year is a sight to behold with the caparisoned Ambari elephant carrying the 750-kg golden howdah. This year again Arjuna has been chosen to carry it on Sept. 30, the day of Vijayadashami.

However, the animal right activists always feel that the howdah-carrying elephant might be under terrible stress, as he is made to carry an object weighing 30 per cent of his own body weight over a distance of 5.5 kilometres.

These and other questions arose following a report in a section of the media today that the Mysore royal family members wanted to return to a pre-1970 tradition of a herd of elephants pulling the golden howdah placed on a chariot during Dasara.

A source in the Mysore Palace, speaking to Star of Mysore on condition of anonymity, said that it was shocking and surprising to read it, as it has always been a tradition for the elephant chosen to carry the howdah.

Before the privy purses were abolished it was the Maharaja, his uncle and even the late Srikantadatta Narasimharaja Wadiyar as a ten-year-old boy, who sat on the howdah elephant to the delight of lakhs of people who used to gather to watch this yearly grand spectacle.

Never once in its 408-year history has a herd of elephants pulled the golden howdah during Dasara, he categorically stated and added that the paintings of Dasara procession featured in the Kalyana Mantap in the Palace, is ample proof where it shows the elephant carrying  the howdah. 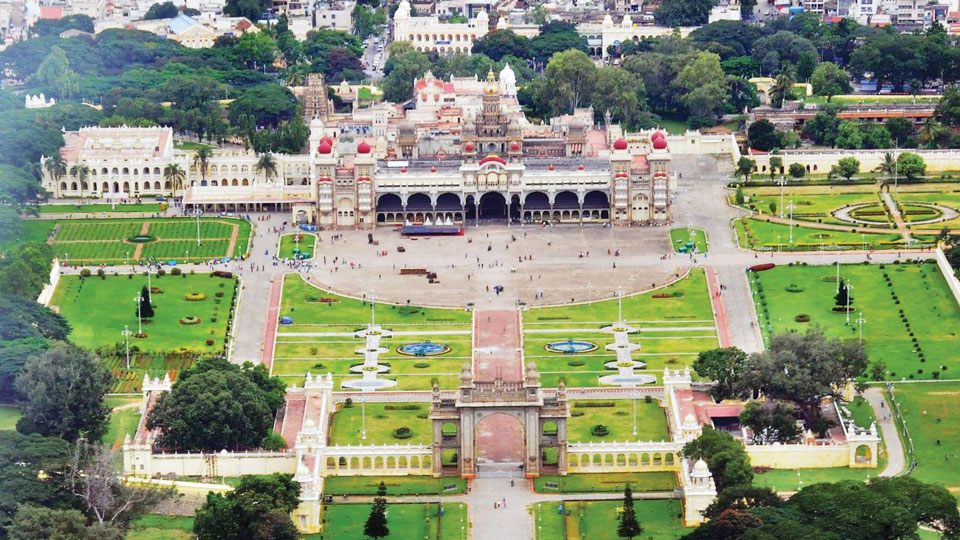 Veterinarian Dr. D.N. Nagaraj, who is looking after the Dasara elephants, told Star of Mysore that an elephant trunk has the power to lift two tons of weight. A person weighing 75 kgs can easily lift a 100 kg weight and loaders and coolies commonly lift such heavy articles daily.

Arjuna weighs 5,520 kg and for him to carry a 750-kg golden howdah has not affected him at all, just like it had not affected the previous howdah elephants, he said.

Elephant Project Director Manoj Kumar, speaking to Star of Mysore, said that the elephants are fed a special diet. Every year the chosen howdah elephant is made to carry the weight in stages. “The howdah elephant is made to rehearse. First soft cushion (gaddi) is placed on it, then the sand bags of the weight of howdah are placed and finally the wooden howdah of equal weight is placed on Arjuna and made to walk. We take all precautions to exercise all the Dasara elephants and prepare them for Dasara procession,” he said.

The special Mahouts Pasha, Zakaulla and Chikkanna, who have all been a part of Jumboo Savari, told this newspaper that the Dasara elephants including the howdah elephants always behave well and never create problems as they are trained well to march in the procession.

The source in the Palace said that it was late Srikantadatta Narasimharaja Wadiyar, who had suggested the District Administration not to mount the howdah on the elephant and make it stand for hours before the procession began. Instead, the howdah should be mounted just an hour after the procession begins, which is what is now followed, he added.

Both Veterinarian Dr. Nagaraj and Elephant Project Director Manoj Kumar dismissed as rumours, the royal family members approaching the experts and seeking their opinion on whether the howdah could be mounted on a chariot and drawn by a herd of elephants.

It was not only the Jumboo Savari from the Mysore Palace to Bannimantap that the people looked forward to but what they eagerly awaited was the return procession in the night when the royal family members would sit on the howdah elephant and greet the people with folded hands on their way back, recalled the source in the Palace.

The last time Jayachamaraja Wadiyar, the then Maharaja of Mysore, participated in the Dasara procession was in 1969 and after the privy purses were abolished in 1971, the Nada Habba or State festival began. However, the Khas Durbar or the tradition of Private Durbar has continued to this day in the private portion of the Mysore Palace where Pramoda Devi Wadiyar and her son Yaduveer Krishnadatta Chamaraja Wadiyar reside.