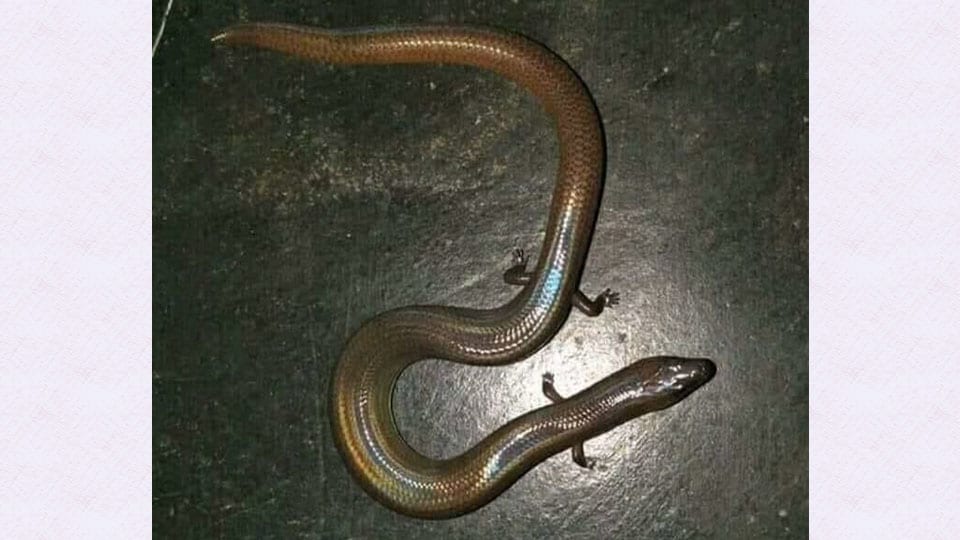 Kodagu: A rare Rurk’s ristella skink was found by some wildlife enthusiasts on their way to Madapur in Kodagu district recently. Ristella rurkii, commonly known as Rurk’s ristella, is a species of skink endemic to the Western Ghats of Southern India. It is a small, insectivorous, diurnal skink found in Shola grasslands and rainforests of hills ranges in parts of Karnataka, Tamil Nadu and Kerala.

The specific name, rurkii, is in honour of “Dr. Rurk” who collected the type specimen in the Anaimalai Hills, High Ranges, Travancore, and the Palani Hills, of Tamil Nadu and Kerala. It is endemic to rainforests South of Palghat Gap.

It is a small, slender lizard and grows up to 15 inches in total length (including tail). The skin is bronze-coloured, with dark sides. The eyelids are immovable, in contrast to many other skinks. It is a shy species, which lives under stones and leaves in dry places, such as South slopes, fields and meadows. It is active during twilight and hunts for insects and small snails. It is a typical ground dweller and dislikes climbing.

A.A. Poovaiah of Wildlife First, who spotted the skink by the side of the road, told ‘Star of Mysore’ that he confirmed with retired Forest Officer and Wildlife First Trustee K.M. Chinnappa that it was a rare sighting. “Chinnappa has been inside forests of Kodagu (Western Ghats) all through his life and he has not seen the species so far,” Poovaiah said. The photo of this Caecilian was clicked by Putherira Pappu Thimmaiah.