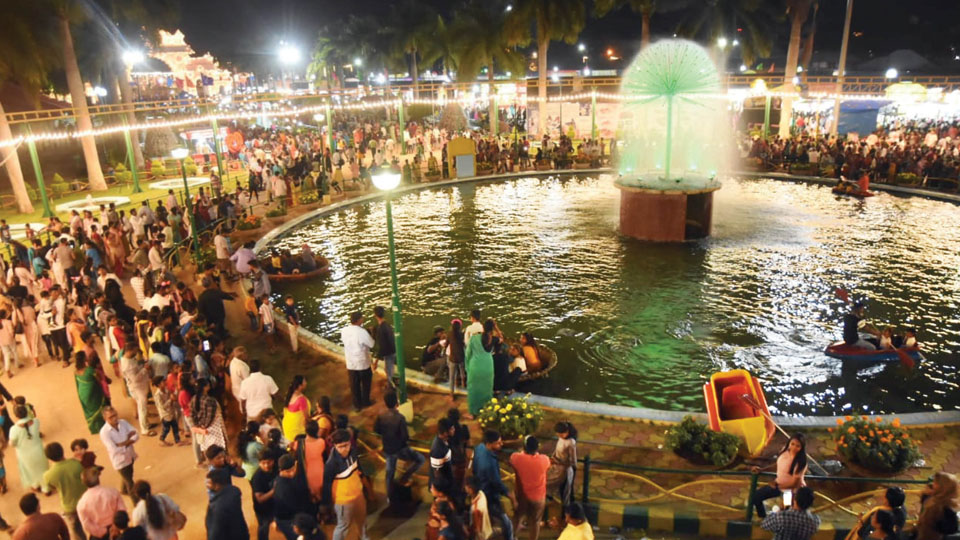 Visitors face hardship due to lack of basic facilities

Mysore/Mysuru: Mysuru Dasara Exhibition, which is one of the major attractions for the tourists who visit the city during Dasara season, is literally overflowing with crowds thronging the place in huge numbers. Though the Exhibition was opened on Sept. 26, it is since Oct. 4 that the influx of people visiting it has increased by leaps and bounds.

During morning, visitors throng places like Mysore Palace, Zoo, Chamundi Hill, Karanji Lake, KRS and other nearby tourist centres and after enjoying lighting of Palace and other major roads of the city in the evening, head straight to Dasara Exhibition.

Network problem: The moment people enter the Expo area, their mobile networks are disappearing and visitors were seen trying desperately to make calls. “To make a phone call, one needs to come out of the Exhibition,” complained a visitor to SOM.

No water: Visitors are feeling the acute shortage of water inside their favourite Exhibition premises. There is no drinking water and also no water in toilets. The Dasara Exhibition officials before inauguration of the exhibition had claimed that drinking water was available at 8 places and toilets were in good condition. But once inside, the lack of even basic amenities are glaring.

Open drainage: People of all ages visit the Dasara Exhibition and one is appalled to see that many drainages are not covered and kept open. As a result, a senior citizen fell into one of the open drainage and injured his leg. There was also no First Aid unit to offer help. The angry citizen was later pacified by the Police and sent home.

Use of plastic: The majority of the stalls inside the exhibition are using banned plastic covers and visitors are urging the authorities to take note of this and take action against offenders.

Trumpet menace: Though the City Police have banned the sale and use of plastic trumpets during Dasara following complaints last year, the sale is going on this year too, much to the discomfort of the visitors.