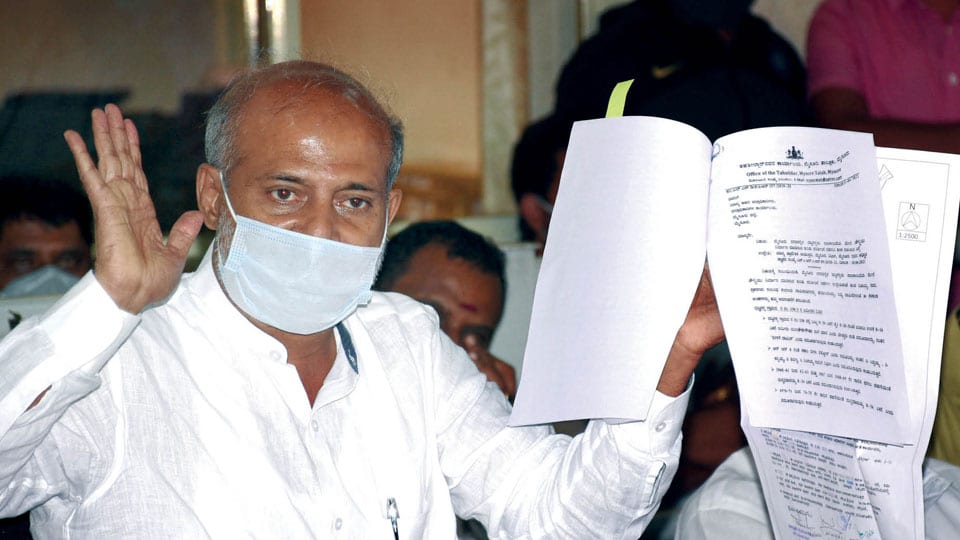 Mysore/Mysuru: The controversy after former Mysuru Deputy Commissioner Rohini Sindhuri saying that the Sa.Ra. Convention Hall — a Choultry owned by K.R. Nagar JD-S MLA S.R. Mahesh — stood on a Raja Kaluve (storm water drain) showed a sign of settling down for now as the probe panel has submitted a report giving a clean chit to the MLA.

The report stated that the said building had not been constructed on the Raja Kaluve and the Choultry does not stand on encroached land. Rohini Sindhuri contended that the Convention Hall was built with a severe violation on Survey Number 123 which is a grazing land as notified by the Government and had demanded a comprehensive probe into the entire deal of how the Government land was transferred into private land.

Soon after the report was submitted to the Regional Commissioner, MLA Mahesh held an emergency press conference last evening and claimed that the allegations made by the IAS Officer were far from truth. “I don’t have anything to say now as it has been established that the Choultry has not been built on a Raja Kaluve,” he said.

What the report says?

The report states that as per the Aakaar Bandh (root land document) of Survey Number 130/3, the Choultry stands on a 2.15-acre land and there is no Government land here. The Kharab land on Survey Numbers 123/1, 122/1.2 and 98 has been identified and as per plans, box drains and a road have been constructed. There is no encroachment of Government land.

The land RTC of 2.15 acres is in the name of Anitha Mahesh, wife of MLA Mahesh after the land was owned by different owners. The said land was earmarked as residential purpose in 2004 and later in 2010 the same land has been converted into commercial use by an order issued by the then Government (Deputy Commissioner), the report said.

Reacting on the probe committee report at the press conference, MLA Mahesh said that there is no truth behind the allegations made by Rohini Sindhuri. “Let the IAS Officer introspect and ask her conscience,” he said.

“There is no Raja Kaluve in Mysuru but there is a canal that runs from Krishna Raja Sagar (KRS) Dam and Kukkarahalli Lake and from there to Lingambudhi Lake. This has also been mentioned in the records. We have not encroached upon the land and instead, we purchased the parcel of the land (4 acres) 30 years ago by paying Rs. 90,000 per acre and all the transactions are legal,” he claimed showing a set of records.

“I had written a 10-page letter to the Chief Minister citing certain irregularities committed by the previous DC and as soon as the Government initiated the enquiry, Rohini Sindhuri made allegations against me and through some RTI activists attempted to tarnish my image and passed orders just a day before her transfer and tried to project that land mafia was involved in her transfer,” Mahesh claimed.

Mahesh said that he has not in any way encroached upon the Lingambudhi Lake land. “As per the Karnataka Lake Development Authority guidelines and as per the Supreme Court orders, development work cannot come up till 30 metres of the land from any lake. But the former Mysuru DC says — as per 2016 law — no construction is permitted within 70 metres. The Forest Department has demarcated its boundaries and the land has been fenced with boundary stones,” he said.