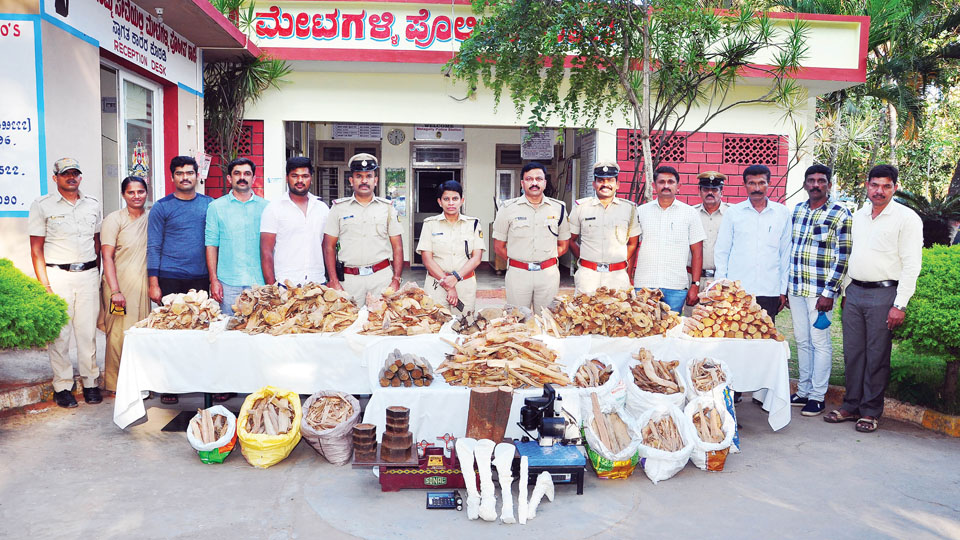 Mysore/Mysuru: A week after busting an inter-State gang of sandalwood smugglers and arresting four accused, the city Police swooped on another similar gang and have arrested another four accused. The latest arrests made by Metagalli Police have yielded sandalwood weighing 230 kgs worth Rs. 35 lakh along with machetes, axe, saw, bike, weighing scale and other items.

On Jan. 13, Raghu and Manjunath sneaked into the heavily guarded Bharathiya Reserve Bank Note Mudran Private Limited (BRBNMPL) premises located near Belavatha Ring Road and chopped off a fully-grown sandalwood tree and had taken away the trunk.

Following information from the RBI Security personnel, Metagalli Police arrested them on Jan. 14. On interrogation, Raghu and Manjunath told the Police that on Jan. 8 they had sneaked into RBI premises and had stolen a sandalwood tree trunk and had sold it to Maqbul Sharif of Lashkar Mohalla.

Again on Jan. 13, they entered into the same premises and were chopping another sandalwood tree during which they were caught red-handed. Pieces of sandalwood, machete, axe, saw and a bike was seized from them. Their arrest was formalised on Jan. 14.

Maqbul Sharif has been buying stolen sandalwood since many years and used to supply machetes, saw and torches to wood thieves. The Police, who raided the house of Maqbul on Jan. 15, arrested him and recovered 33.5 kg sandalwood which he had illegally bought from Raghu and Manjunath and also from others.

Maqbul told the Police that after buying sandalwood, he used to sell the same to Syed Ghouse Mohideen of Kalyangiri Nagar. The Police again raided the house of Syed Ghouse on Jan. 16, arrested him and recovered 190 kg sandalwood billets besides seizing a weighing scale and other items. The total worth of the wood seized is estimated at Rs. 35 lakh.

Police said that Syed Ghouse is a habitual offender and has cases of buying stolen sandalwood registered in 2019 at Virajpet Rural Police Station and was jailed for 84 days at Madikeri Central Jail last year. After coming out of the jail, he again continued his illegal trade.

It may be recalled that a special team under Nazarbad Police Sub-Inspector M.L. Siddesh on Jan. 8 had arrested a four-member gang of inter-State sandalwood smugglers and had seized 46 kg sandalwood logs worth Rs. 5.5 lakh and a car used for smuggling.