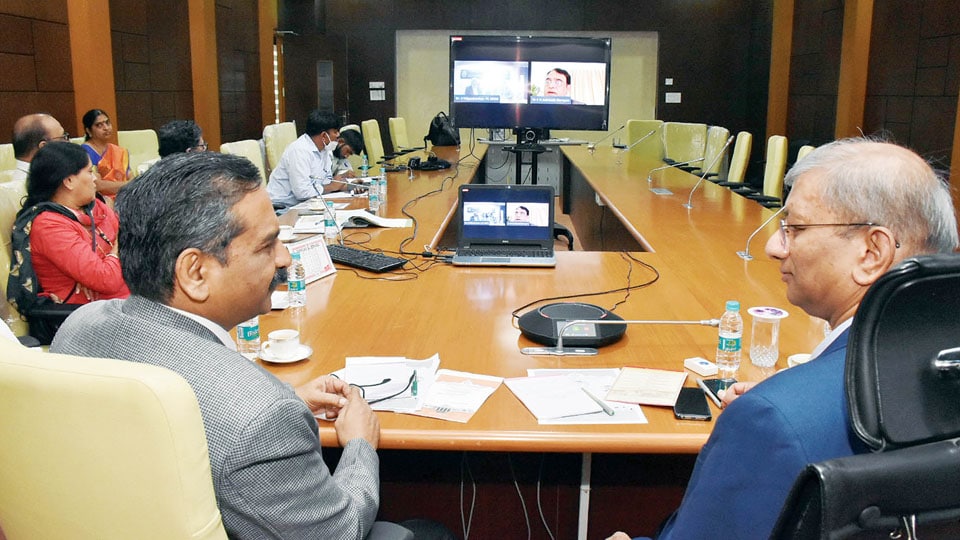 Mysore/Mysuru: Stating that the city-based Karnataka State Open University (KSOU) is celebrating its Silver Jubilee this year, Vice-Chancellor Prof. S. Vidyashankar said that  KSOU will be organising a massive  online ‘Udyoga Mela’ (Job Fair) within two months.He was speaking at the inauguration of 3-day online induction programme for newly admitted students in 2020-21 (August batch) in Muktagangothri campus  here this morning.

Pointing out that the Government of Karnataka has enacted an Act that recognises KSOU as the only State-run University to offer distance education courses, Prof. Vidyashankar said that KSOU was established in 1996.

Noting that the University adopted digital learning one-and-a-half-years ago, the VC highlighted that KSOU has crossed many hurdles, including de-recognition of its courses by the UGC, in the 25 years of its journey.

Asserting that KSOU is working towards propagating Prime Minister Narendra Modi’s concept of ‘Digital India’, Prof. Vidyashankar said that the University has developed an App, through which the students can download study materials at ease.

Stating that payment of course fee, exam fee, issuance of marks card etc., has gone online, he said that students are required to come to the University only once during admission for physical verification of records.

He further said that the Open University is working towards getting Section 12 B status of UGC for receiving Central assistance under various schemes and NAAC recognition and he was hopeful of getting them before he demitted office after completion of his term.

KSOU Registrar Prof. Lingaraj Gandhi said that this year the University has enrolled over 17,000 students as against only 10,000 last year.

READ ALSO  At last, KSOU re-opens its doors to lakhs of students

Pointing out that this is the second year of admission after the KSOU got back recognition of its courses from the UGC in 2018, he maintained that KSOU, just like other conventional Universities, is maintaining quality and standards in imparting distance education to thousands of students every year. Prof.Gandhi further said that a committee will be formed to prepare an action plan for Silver Jubilee celebrations and added that the virtual job mela is going to be part of the celebrations.

Stating that the University has successfully crossed several hurdles and has been successful in  enrolling 17,244 students this year (2020-21) from every nook and corner of the State, he said that the Government recently brought an Act, which makes the KSOU as the only distance education provider in Karnataka.

Noting that at present, the KSOU can impart distance education only within the State, he said that the University has scope to expand its horizons beyond the State, after the implementation of  National Education Policy (NEP).  KSOU Dean (Academic) Prof. Kamble Ashok, Registrar (Evaluation) Dr. Kavitha Rai, Study Centre Dean Dr. Shanmukha, CIQA Director Dr. S. Niranjanraj, Special Officer Dr. Rajeshwari and others were present.