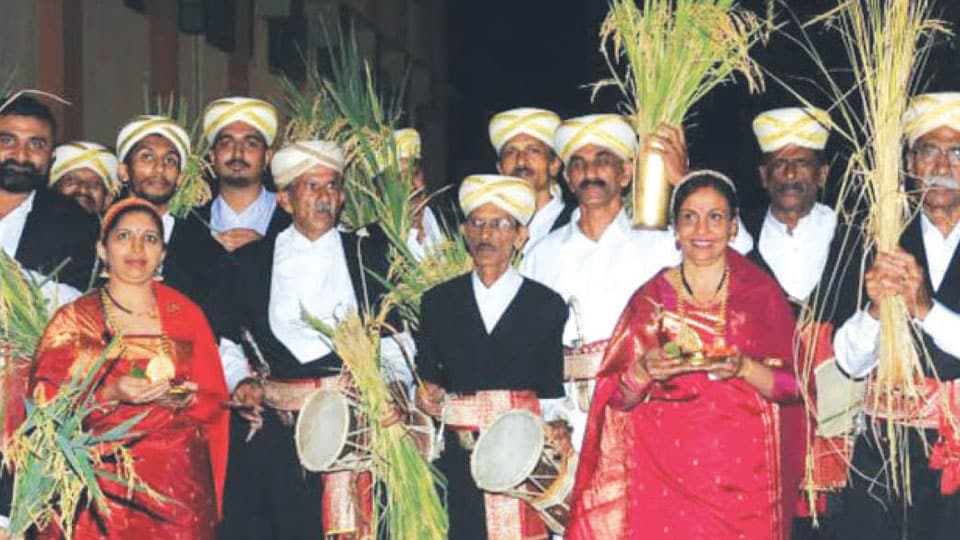 Call to help preserve memories of a vanishing people

While modernisation has opened many opportunities for the well-qualified, it has also distanced the young from their heritage and culture.  This is even more accentuated amongst Kodavas living outside Kodagu. There is a need to establish a platform where young Kodavas could learn and keep in touch with the community’s heritage, cultural practices, folklore, music, dance, festivals and history, says Mrs. Codanda Rathi Vinay Jha, IAS (Retd.) and Chair, India Foundation for the Arts (IFA), who has initiated establishing a Virtual Museum of Kodava Heritage & Culture named ‘Sandooka,’ a treasure trove of information. —Ed

Kodavas are a micro-minority community in India, who live in Kodagu (Coorg) in Karnataka State. It is estimated that there are about 1,50,000 ethnic Kodavas within and outside Kodagu.

Kodavas, by virtue of living quite isolated in a densely wooded hilly terrain on the Western Ghats of India since time immemorial, have developed their own unique culture, physical attributes, cuisine, language, attire, religious rituals and practices.

Over the centuries, Kodavas adapted themselves to the harsh weather conditions, dangers from wild animals and the inhospitable terrain of Kodagu and transformed the land to an idyllic haven it is today.  With the passage of time, they toiled literally with bare hands to cultivate paddy in the valleys.

With the forests providing bountiful supply of wild game, they became expert hunters initially with bows and arrows, and later with firearms which enabled them to emerge as a warrior race.  They transformed the fertile land and were able to grow enough paddy that they could export to neighbouring areas.

The interactions with immediate neighbours in present day Kerala, Mysuru and Mangaluru, influenced the Kodava language, places of worship, construction of their dwellings and some of the religious practices as well.  However, Kodavas still retain their fundamental philosophy of ancestor and nature worship.  They come under the broad umbrella of Hinduism.

During the British rule, education was introduced and this brought about quantum changes in the lifestyle of the Kodavas.  Kodavas found several employment opportunities.  Introduction and scientific cultivation of coffee and spices vastly improved the economy of the region.  Kodava culture and ethos found expression in the writings by the British, European and Kodava authors.

By the time India got her independence, many Kodavas held important and high-level offices in sectors such as the Defence Forces, Administration, Revenue Department, Forest Department, Police, in the field of Education, Engineering and Medicine.

Kodavas have several distinctive elements in their social, cultural and religious practices.  One of them is the deferential status given to women. There is no dowry system in the community.  Centuries ago, widow remarriage was permitted. This enlightened attitude is now reflected in well-educated Kodava women shining in a variety of fields.

After India’s independence many Kodavas ventured out of Kodagu seeking better opportunities in education, employment, business and sports.  Kodavas are now spread all over the globe.  The last three decades has seen a large number of Kodavas migrating outside the country. There is now a sizable number of Kodava diaspora in the US, Canada, UK and Australia.  In many cases, there are a couple of generation of Kodavas born and brought up outside Kodagu and outside India as well.

While modernisation has opened many opportunities for the well-qualified, it has also distanced the young from their heritage and culture.  This is even more accentuated amongst Kodavas living outside Kodagu.  There is a need to establish a platform where young Kodavas could learn and keep in touch with the community’s heritage, cultural practices, folklore, music, dance, festivals and history.

It is with this aim in mind that Mrs. Codanda Rathi Vinay Jha, IAS (Retd.), as Chair, India Foundation for the Arts (IFA), initiated establishing a Virtual Museum of Kodava Heritage & Culture (VMKHC).  This project is evocatively named — Sandooka — a treasure trove of information.  IFA has successfully supported several path-breaking projects in the field of  art and culture.

Sandooka will be a living museum that will be interactive and open to receiving relevant new materials from the public.  People, especially the future generations of Kodavas, will have an easily accessible platform to gather details of their heritage.  Weblinks will also be given to some of the websites dealing with Kodava culture.  It is hoped that this treasure trove of information will be of immense help to those who wish to carry out further research on Kodavas. VMKHC will cover the following aspects of Kodagu and Kodavas:

The project is generously funded with a Corporate Social Responsibility (CSR) grant from Recaero India Pvt. Ltd., which is a pioneer in the field of aerospace engineering and is headed by Vinay Jha, IAS (Retd).  A highly professional team has been forged to deal with every aspect of the project.   The team comprises:

Sandooka invites submission of Kodava artefacts, rare photographs, antiques including jewellery (photos) and anecdotes of yore.  All accepted materials will be given due recognition and credits. Sharing your valuable knowledge and collections will enrich the contents of Sandooka.

For details of submission of materials, please visit: www.sandookamuseum.org