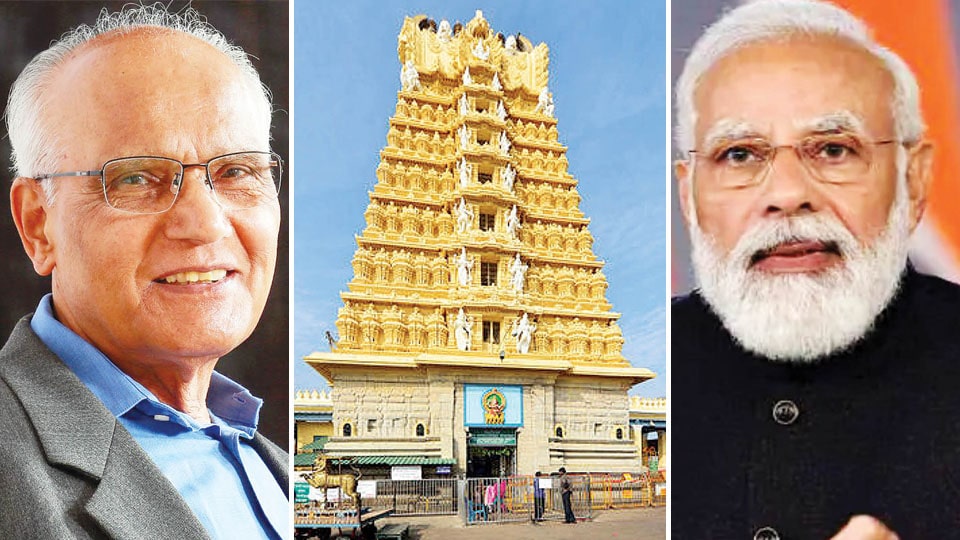 Mysore/Mysuru: Even as concerned citizens of our city and the NGO, Mysore Grahakara Parishat  (MGP) are engaged in a campaign to save the natural beauty of the Chamundi Hill from various construction activities, including the Central Government’s proposed PRASHAD Scheme, as a last resort, the renowned writer and novelist Dr. S.L. Bhyrappa has written a detailed letter to Prime Minister Narendra Modi himself calling upon him to stop this vandalism at the temple mountain.

The full text of the letter is  produced here:

I am writing this letter requesting you to ask your Tourism Ministry to apply the true spirit of an imaginatively and beautifully conceived concept of PRASHAD to promote spiritual tourism for a project in Chamundi Hill, Mysuru.

What I have heard about the project proposal submitted by the Karnataka State Government has pained me. It is concentrating more on the modern concept of architect using concrete and environmentally unsustainable materials. What we need is to demolish the already existing concrete jungle and restore the natural beauty of the hill with minimum interference from contractors. The State Government’s proposal adds some more to the concrete jungle in the name of glamorising it.

Below I have outlined my suggestions for your consideration.

Chamundi Hill has many granite rocks.  Especially during summer months, they emit heat. We need to plant hill-friendly trees which will cover those rocks and stop being heated. This will result in some cooling for the city.

Around the temple, on the hilltop, we should have massive planting of trees instead of the artificial roof constructed today. For most part today there are hardly any trees and the proposal also does not talk of any greening.

With more than 4,000 residents on top of the hill which was hardly in hundreds a few years back, it has reached unsustainable limit. We should limit houses only to priests and working staff of the temple. All other houses should be relocated in the city and compensated as we have done with tribals in some reserve forests.

All private vehicles including VIPs (as a model to others) should be banned and only electric operated buses should be allowed.

To the extent possible, all concrete jungle already created should be demolished with minimum harm to the environment. I am pained to write that even though the authorities assured the environmentalists that no dynamite will be used for multi-level parking, such assurances were ignored. People responsible were never held accountable. We do not know what damage it has created not only to the old temple subsoil but also to wild animals and birds.

Finally, I want to suggest a novel idea which has not been attempted any where in India or the world. Instead of Chamundi Hill copying Hampi or Tirupathi, it should develop its own development model for others to adapt.

Only puja materials should be sold by the Temple Authorities and not by private vendors. The atmosphere on the hilltop should be conducive to people who want to meditate or breath silence.

What I am suggesting is in total compliance of what you had proposed during Paris Summit in 2015 to fight climate change. It is to adapt India’s civilisation message of “Simple living, high thinking.” One other unintended benefit is that we do not need to spend huge funds to implement what  I  am proposing.

The former Government of Karnataka has constructed with cement and bricks multi-level parking lot for 600 cars and 100 commercial shops. With the result, they have converted the hilltop to commercial centre destroying the Yaatra Centre which it was earlier. The serenity and peace are totally destroyed.

Since centuries, there were steps to climb the hill. The steps should be shadowed by bowers and not metallic structures.

Kannada Novelist, Fellow of Sahithya Academy, Author of PARVA which is translated into Chinese and Russian by Sahithya Academy; National Professor for 5 years; Saraswathi Samman Awardee.

Note: In the 1980s, there was some fund with the Temple Authorities derived from the offerings of the devotees amounting to a few crores of rupees. It was then decided by the authorities, Mysuru Deputy Commissioner being the one, to construct a Guest House and a ‘Dasoha’ building (Free Food House). So it was done. At that time, Star of Mysore had strongly protested against this vandalism on the ground that the locations of the buildings were disfiguring the environment of the temple.

Many visitors were shocked. Earlier, as one entered the precinct of the giant statue of the demon King Mahishasura, one could see behind it a skyline sprawling into infinity metamorphosing itself into various shades of colours according to the time of the day — morning-noon-evening. It was a sight for the Gods to see.

Sadly, such a panoramic skyline was completely covered by the ugly structure of the so-called Guest House where at no time a viable number of guests ever stayed. Reports had appeared about the place being misused by the anti-social elements.

Therefore, I quite agree with Dr. S.L. Bhyrappa when he says many of these old and new concrete structures should be demolished without causing damage to the environment and the hill itself.—K.B. Ganapathy, Sr. Journalist.

6 COMMENTS ON THIS POST To “Save Chamundi Hill: Dr. S.L. Bhyrappa writes to PM”