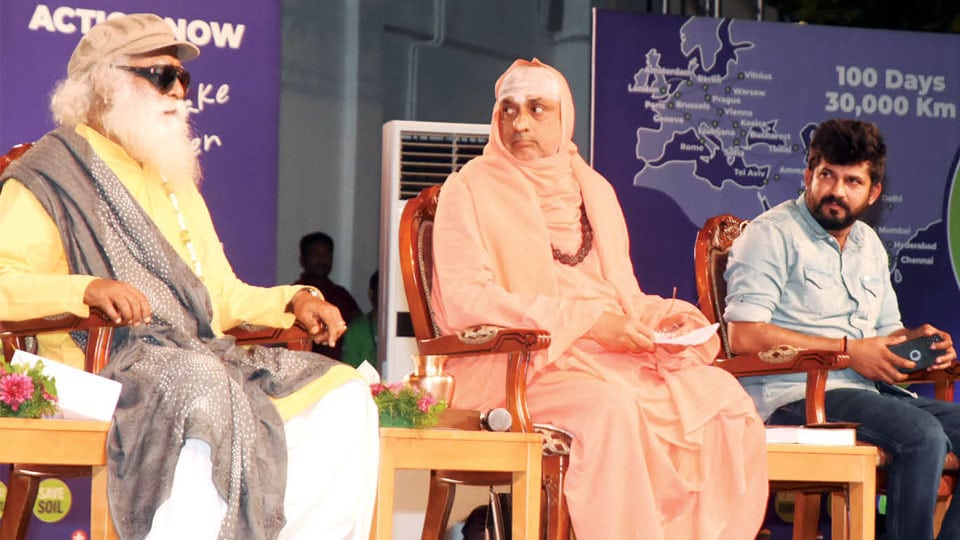 Mysore/Mysuru: The concluding leg of Sadhguru Jaggi Vasudev’s ‘Save Soil Movement’ reached Mysuru last evening after his stopover in Bengaluru. The Sadhguru addressed a massive gathering of youths at Manasagangothri Open Air Theatre where he received thunderous applause for his mission to spread global awareness.

The Founder of the Isha Foundation set foot on the soil of India after riding through the bone-rattling chill of Europe and the furnace of the Arabian desert. Sadhguru returned to India at the Jamnagar Port in Gujarat after his journey met with resounding success in Europe, Central Asia and the Middle East.

Addressing a roaring and cheering audience — 607th event of the movement at the jam-packed Manasagangothri Open Air Theatre — Sadhguru gave a clarion call for people to voice their concerns to save soil. He stressed the need for a huge effort worldwide to protect soil in ensuring the planet remains habitable for  future generations.

Not just by vote but by voice

He highlighted the grave threat of dying soil, reminding the audience that we could be a generation that turned humanity back from the brink of disaster. In democratic nations, Governments are elected for a limited term and it is the people’s mandate that inspires Government to act on something that bears results in the long term.

“People’s mandate is not just by vote but by voice,” said Sadhguru and urged people to “keep their voice up till we solve the soil issue in this country and the rest of the world. Every one of us is a partner in this massive destruction of soil that we have done. The only way is for every one of us to become partners in the solution,” said Sadhguru.

The Sadhguru called for urgent policy-driven action to protect the agricultural lands from becoming barren. “Everything we see in nature comes from the soil and will go back to the soil,” he said. Reiterating that we all hold a powerhouse in our hands in the form of a phone, he urged everyone to make use of social media to speak about soil. “When you have power like this, we must make it happen,” Jaggi Vasudev exhorted.

Stressing that all other environmental issues are relevant as long as the soil is alive, Sadhguru called for the need to treat soil extinction as a separate issue. Once soil extinction begins to manifest, none of these things will matter as the degrading soil crisis, he asserted, is “of existential significance” having “existential consequences upon our lives.”

The Sadhguru spoke about the critical need to regenerate soil health to make it remunerative for farmers to continue to farm their lands in the interest of food security, to reduce migratory exodus into cities and to ensure long-term planetary well-being.

“We are in such a situation that if we act now, we can make a significant turnaround within the next 10 to 15 years to increase the organic content in the soil. It is not rocket science, nor does it take enormous financial outlays, all it takes is focusing ourselves in the right direction and relentless commitment to making that happen,” he added.

Sadhguru, who has now clocked over 27,000 km of his solo bike journey, revealed, “4 days ago, we touched over 3.2 billion people. So, this shows that people are not unaware, people are not insensitive, it is just that it’s never been activated.”

Only a Saint can dare to say this: Suttur Seer

Suttur Mutt Seer Sri Shivarathri Deshikendra Swamiji recalled Sadhguru’s speech at the recent World Economic Forum (WEF) where he emphasised that the global forum should not just end with heaps of papers but come out with implementable actions. “Only a Saint can have the daring and the guts to say such a thing in a global forum. All Indians should be taking pride in this matter,” the Seer said.

The Swamiji urged the people to support the Save Soil Movement. “One cannot increase the surface of the earth. We must save what is available to us. Save Soil is not just about shouting and screaming slogans, it is about understanding what Sadhguruji says and following it,” he said.

MP Pratap Simha spoke about Mysuru’s connection with Sadhguru and said, “Wherever Sadhguru goes, youngsters gather in big numbers. For Mysuru, be it the ‘Rally for Rivers’ or the ‘Save Soil’ event, people have gathered in big numbers. After Swami Vivekananda, who has spread India’s tradition, knowledge, culture and dharma to the world, it is Sadhguru who is spreading awareness about India globally.”

Primary objective of Save Soil Movement

The primary objective of the Save Soil Movement is to urge all nations of the world to mandate a minimum of 3-6 percent organic content in agricultural soils through urgent policy reforms. Without this minimum organic content, soil scientists have warned of the imminent death of soil, a phenomenon they are terming as ‘soil extinction.’

In India, nearly 30 percent of fertile soils in the country have already become barren and are incapable of yield. The United Nations has warned that at current rates of soil degradation, 90 percent of the earth could turn into a desert by 2050 — less than three decades from now. To avert this catastrophe, Sadhguru initiated the Save Soil Movement in March this year, and travelled across 27 countries meeting leaders, politicians, scientists and citizens to galvanise support to Save Soil.

“This has not only been a long journey, but also an incredible activity. Volunteers from all around the world — from the UK to Europe to Central Asia to Arabia and Africa — have done a fantastic job. I don’t have to say anything about India. And all the States that we passed through…every one of the States, have signed MoUs with Save Soil Movement.” — Sadhguru Jaggi Vasudev