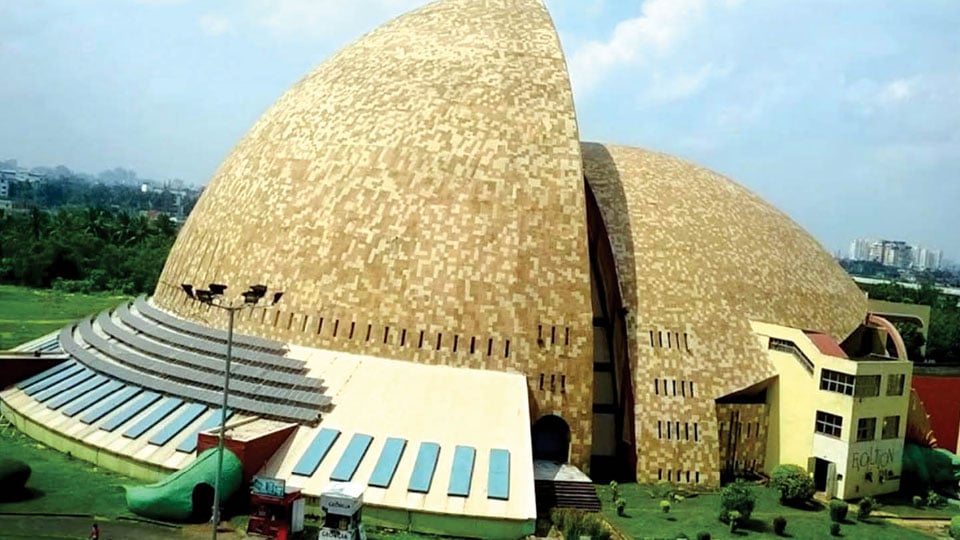 Mysore: A Science City on a 25-acre land near Suttur in Nanjangud Taluk, 25 kms from Mysuru, being built in joint collaboration by the Centre and State, could be another science hotspot of the country. The proposed Science City, the first in South India, will be on par with the Science City in Kolkata that is one of the major tourist attractions in West Bengal.

This Science City at Suttur will create one of India’s largest science hubs. The project is worth Rs. 200 crore and will be built as a joint venture by the Centre and State. The mega project is being set up following the directive from the Ministry of Science and Technology. The land for the project will be donated by Suttur Mutt free of cost.

A closed-door meeting was held this morning at the Suttur Mutt that was chaired by Deputy Chief Minister Dr. G. Parameshwara in the presence of Suttur Seer Sri Shivarathri Deshikendra Swamiji where a power-point presentation was made to the Dy.CM regarding the Science City. Media, however, was not allowed inside the meeting hall. Later, the Dy.CM inspected the land that is to be donated for the Science City.

The Suttur Veerasimhasana Mutt will have the distinction of hosting the Science City that will kindle scientific spirit among students and masses. Once the Science City becomes a reality, the Mutt, which has contributed immensely to the cause of societal advancement touching the lives of millions of people with educational institutions, agricultural research centres and Co-operative Societies, will draw seekers of knowledge and scientific wisdom.

Mutt sources and Dr. Parameshwara said that the Detailed Project Report for the mega project is ready and very soon, the project will be discussed in the Cabinet and sent to the Centre for the release of Rs. 100 crore. The State, on its part, will release its share of Rs. 100 crore.

The works are expected to begin in six months and the project will be completed in five years. The Mutt has set a target of three years for the completion of the project, Dr. Parameshwara said.

The Science City will popularise basic science and will have scientific galleries, planetariums, space theatres, 3-Dimention demonstrations, astro technology, science models from across the world, animated models of evolution and ‘Science on a Sphere.’

It will also house museums, science park and exhibition galleries, which would deal with the modern advancements in astronomy, biology and other scientific disciplines.

In all, the Science City will have all educational tools to help illustrate Earth’s dynamic processes and associated science to people of all ages.

Developed by the National Council of Science Museums, it is one of the largest and finest in the world, presenting science and technology in a stimulating and engaging environment that is truly educational and enjoyable for the people of all ages. It has, over the years, become a place for memorable experience and enjoyment for both the young and the old.

The project was supposed to come up on the banks of Kukkarahalli Lake. The National Council of Science Museums (NCSM) planned the Regional Science Centre in the premises of University of Mysore (UoM). The Science Centre was to be jointly developed by State and Centre with 50:50 funding. The project, however, has not seen the light of the day as environmental activists and Green Groups are demanding relocation of the Centre from the ecologically-sensitive Kukkarahalli Lake.

Construction activity had begun for the Science Centre on the Hunsur Road near Jaladarshini Guest House and pillars were raised. Due to stiff opposition, however, the project was shelved.