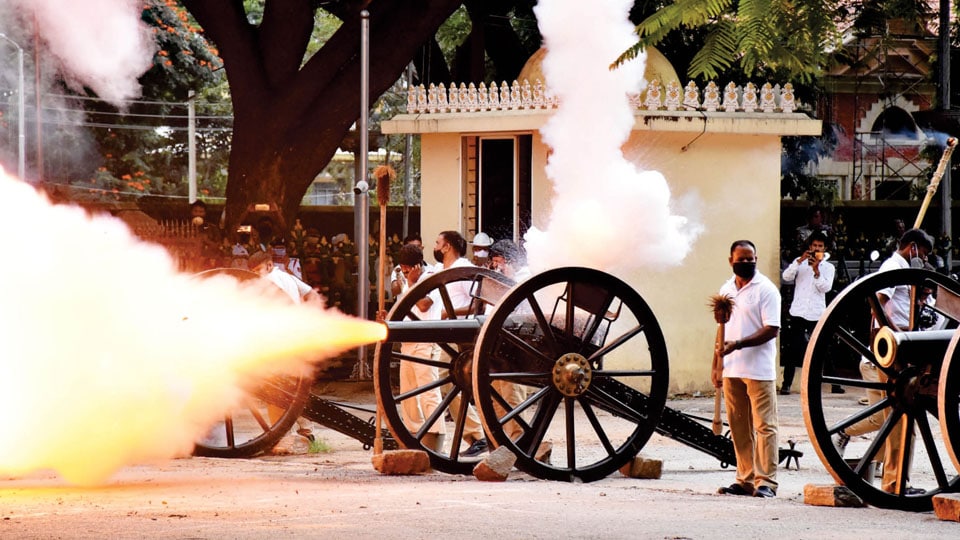 Mysore/Mysuru: With just five days left for Jumboo Savari, which is limited only to the Mysore Palace premises due to COVID-19 pandemic, the five Dasara elephants, led by Golden Howdah carrying elephant Abhimanyu, and horses from the Mounted Police Force underwent the second phase of cannon drill last evening. The first phase of the drill was held on Oct. 15.

The cannon firing drill is being held to acclimatise five Dasara elephants — Howdah elephant Abhimanyu, ‘Pattada Aane’ Vikram, ‘Nishane Aane’ Gopi and ‘Kumki’ elephants Kaveri and Vijaya — and the Mounted Police horses to the booming sound of cannons, so that they do not panic when the cannons are fired during Jumboo Savari.

The Dasara elephants and the horses were brought near the Varaha Gate inside the Palace, while the personnel of the Cannon Unit, using 1.80 kg gun powder for each of the seven cannons, fired 14 rounds at the parking lot outside the Varaha Gate. The Cannon Unit was led by ARSI Siddaraju.

Unlike the first drill, where a few horses panicked on hearing the booming sounds, this time the horses did not panic much. The five Dasara elephants stood firm when the cannons were fired.