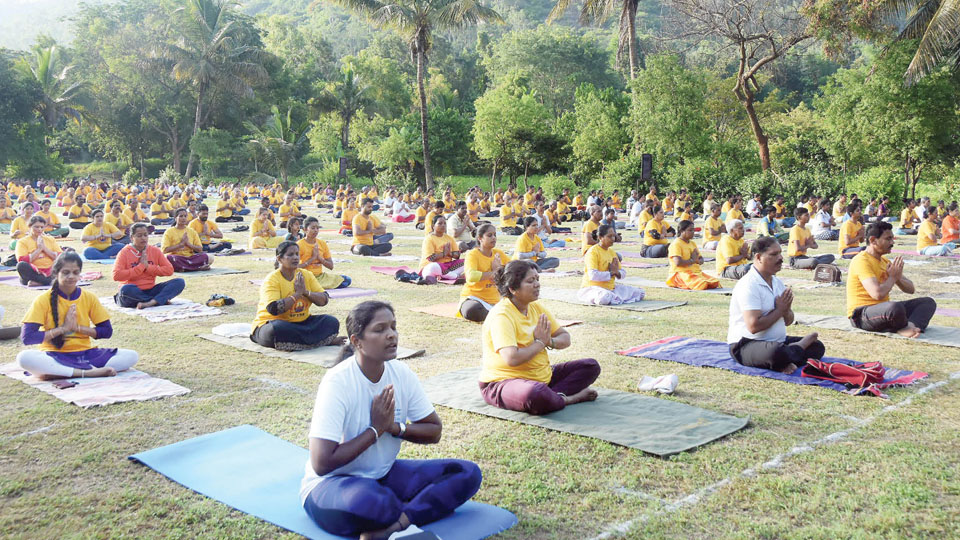 Mysore/Mysuru: The second rehearsal based on Yoga protocols in the run up for the International Day of Yoga (IDY) celebrations on June 21 where Prime Minister Narendra Modi is scheduled to lead the mass Yoga demonstration in Mysuru was held at Suttur Mutt this morning.

This morning, over 1,500 yoga enthusiasts took part in the brainstorming yoga rehearsal session in the common yoga protocol held at the huge meeting hall and surrounding areas at the Suttur Mutt premises in the presence of Suttur Seer Sri Shivarathri Deshikendra Swamiji.

The Swamiji said that the confirmation of PM Modi’s visit to Mysuru has brought a new charm and enthusiasm. “Mysuru contributed immensely to the country’s ancient history and heritage,” he added.

Stating that PM Modi is taking Yoga to the international level, the Seer said that it is a great honour for Mysuru as Modi is visiting the city this year which is the year of ‘Azadi Ka Amrit Mahotsav’ where India is celebrating the 75th Independence Day. “Modi is surely visiting to set another international record. All preparations are being made and there is a festive mood,” he added.

MLA S.A. Ramdas said that PM Modi’s Mysuru visit will help the entire region flourish and the city will gain international focus. “On June 21, yoga must be performed on every street, roads, in parks and houses,” he said.

Yoga Federation of Mysore President and GSS Foundation Head D. Srihari said that various yoga schools and institutions under the banner of Yoga Federation of Mysore are working together to set a new record on June 21. “Every day, trainers are visiting schools and other institutions to train those interested to be a part of the event. After the PM’s visit, Yoga must get a brand name as ‘Mysore Yoga’,” he added.

International Day of Yoga Suttur Mutt Yoga rehearsals
In 2022, who will make it to Rashtrapathi Bhavan ?
Garbage spreads to newer areas