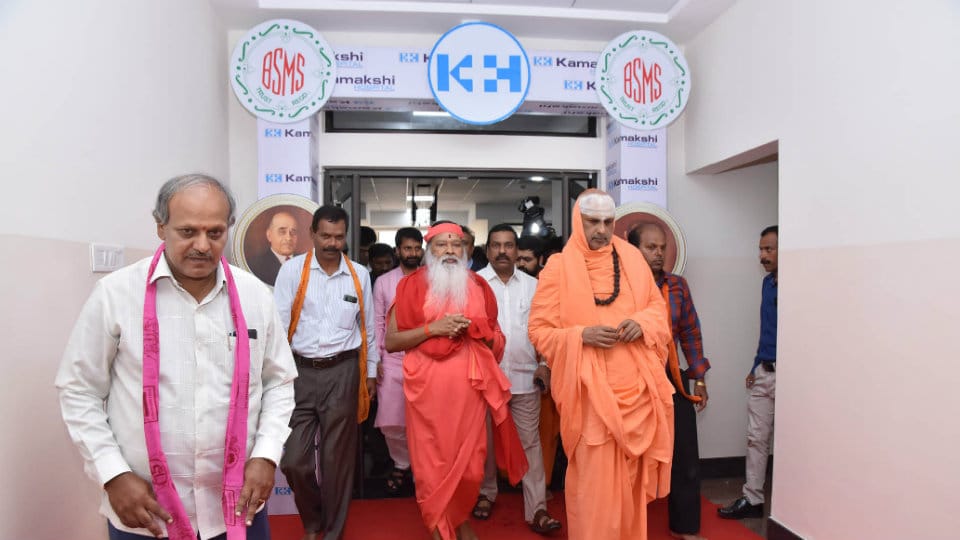 Mysuru: Both Sri Ganapathy Sachchidananda Swamiji and Sri Shivarathri Deshikendra Swamiji came out in strong support of the striking doctors, who had called for a nationwide protest yesterday.

They were speaking after inaugurating the Multi-Speciality Kamakshi Hospital, J.P. Nagar and strongly felt that the doctors’ lives are as important as the patients and the assault on the doctors throughout the country was a very worrying aspect.

Suttur Seer said everyone hopes that once one is admitted to the hospital for treatment he or she returns completely cured. Likewise the doctors also make all efforts to save the patient’s life. Even then sometimes if the patient is not able to survive, then the relatives start assaulting the doctors. Fearing such attacks a time has come now to close the hospitals. It is God who is the final arbiter of saving or taking away one’s life. Hence, even the doctors put all their faith in God when they treat the patients. But, there is no cure available for all illnesses till now and this reality is what everyone needs to understand, the Seer cautioned.

Sri Ganapathy Swamiji in his address said that a situation has arisen where the youngsters are now-a-days scared of entering the medical profession. The doctors give their best to save the patients but if it is beyond their control then they have to give up.  When the patient has reached the last stages, he or she is taken to the hospital and then the relatives plead that they are willing to pay any amount to save the life of the near and dear ones. But if the patient does not survive then they start assaulting the doctors. This is a very dangerous trend the country is witnessing. The Government should come forward to protect the doctors, he said.

The Seer said that they had plans of going to Delhi and urging the Government to come out with laws and rules in protection of the doctors. If this is not done it becomes impossible for anyone to render service. Even the elected representatives on the stage must put pressure on the Government to bring out laws, appealed Sri Swamiji.